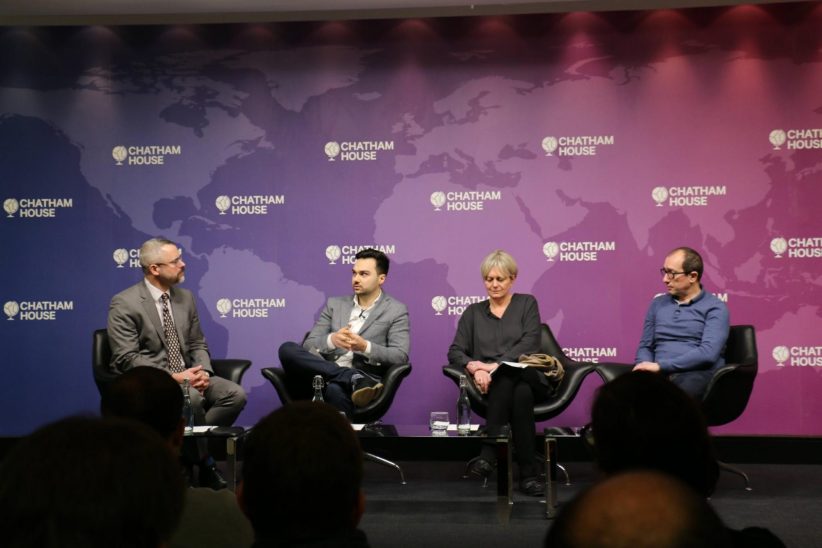 The article was originally published on Focus on Karabakh, a project of the USC Institute of Armenian Studies

Parts of a Circle presented at Chatham House in London Feb. 18, 2020

A documentary film almost a decade in the making brought together Armenian and Azerbaijani experts and journalists to try to tell the story of the Karabakh conflict the way it had not been told before. Emil Sanamyan of the Focus on Karabakh asked the project coordinator Laurence Broers about this unique undertaking. Broers is also the author of a recently published book “Armenia and Azerbaijan. Anatomy of a Rivalry.”

ES: Can you describe your role in this project?

LB: The film we screened on February 18 at Chatham House follows on from an earlier film trilogy, Parts of a Circle. I was the project’s first manager, setting it up in 2011 and running it until 2014. Together with my colleague Jenny Norton, we played the various roles that a film producer might play. We supported the network of media professionals and experts on the Karabakh conflict to make the films, we convened meetings in Tbilisi at which the teams agreed scripts, watched and discussed each other’s footage and we accompanied the teams on their path to agreement on what should go into the films.

After I left Conciliation Resources to focus on research in 2014 I continued to attend the meetings and to support the completion of the three films in the Parts of a Circle series. Five years later I came back to Conciliation Resources as Caucasus programme director, and took over the management of the fourth and final film, which isn’t a new film as such but draws on the same materials as the original trilogy and presents a single, unified narrative in English. Together with my colleagues Jenny Norton and Jenny Tobias, and in close consultation with the project teams, we were responsible for the script and for bringing the film series to a long overdue close.

ES: How did this project originate, who funded it and why did it take so long to complete?

LB: The concept for a series of films documenting the Karabakh conflict came from one of Conciliation Resources’ long-term partners, the Media Initiatives Center (MIC) in Yerevan, in 2011. It built on earlier initiatives, such as Dialogue Through Film and the Armenian-Azerbaijani-Turkish documentary Memories Without Borders, that had established a solid set of relationships between media professionals at MIC and Internews Azerbaijan.

The basic idea was to create a film series that would juxtapose two narratives held by each side in a conflict together in one film, in the way that, for example, the Japanese film Rashomon depicts the same incident but from separate, contradictory perspectives. The viewer is thus exposed to the subjectivity of different perspectives, made aware of their own preconceptions, preferences and biases, and invited to triangulate their own understanding of contested or controversial events. The project envisaged the making of three 1-hour-long films over three years: The Road to War, The War and In Search of Peace.

The project was only made possible by the existence of networks that had built up over many years of partnership. MIC and Internews Azerbaijan were the primary partners, but we also worked with the Stepanakert Press Club and with the Humanitarian Research Public Union in Baku, in addition to individuals well-known for deep expertise in a relevant area, such as Rahman Badalov, Tatul Hakobyan, Shahin Rzayev and Ara Shirinyan. The project was funded by the European Union, through the ‘EPNK’ peacebuilding consortium.

You’re right to highlight that it has taken us what is in fact 9 years to get to this point. There were delays with the completion of the film trilogy, originally scheduled for summer 2015. Some of that was due to the way we had to work: a laborious and time-consuming process of agreeing scripts in Tbilisi, going away to film at home, coming back to Tbilisi some months later, and communicating remotely the rest of the time. It was a quite a large project, with a lot of calendars and moving parts to coordinate.

But the delay was more about the political context in which we were working. Beginning in 2014 there was a crackdown on civil society in Azerbaijan, which led to a number of high-profile trials in 2015. Many NGOs had their bank accounts frozen, including our partners. This raised a lot of issues about how to continue and complete the work – we could hardly expect people to give their time for free. The context also affected the relationships within the project: compared to the halcyon days of Dialogue Through Film in the 2000s, the 2014-16 period tested relationships to the limit. Beyond that, some of the interviewees in the films, such as Arif Yunusov, were arrested, tried and imprisoned. One of them, Afgan Mukhtarli, is still in prison. This attached new significance to the films, and what it might mean to show them in public.

The trilogy was scheduled to complete in 2015, but was still in post-production in April 2016. The ‘four-day war’ further narrowed the space for the film trilogy to have a public profile, just as they were completed. Nevertheless, our partners implemented a programme of more than 100 screenings of the films in 2017-19, reaching selected audiences of more than 1,500 people. That may not sound like much, but I believe this was still a significant achievement in the aftermath of renewed violence.

At the same time, we recognised that only the most committed of international audiences beyond the region would engage with a three-hour trilogy on a conflict that unfortunately remains obscure. We came up with the idea of a fourth ‘summary’ film which would draw on the same materials but in a single, unified narrative written for audiences new to the conflict. The project partners decided to call this film Parts of a Circle: History of the Karabakh Conflict, and this is the film that we screened at Chatham House.

ES: What do you think is the significance of this film?

LB: This film and the Parts of a Circle trilogy are significant on a number of levels.

Firstly, they take a step away from the poisonous information war cultivating the recognition of suffering only on one side and dismissing human losses on the other side as conspiracy or propaganda. In the first two films of the trilogy, where the narrative is dealing with grievous losses on all sides, the alternating story-telling structure exposes the viewer to each side’s interpretation of those events. Each perspective narrates both its own and the other side’s losses. We are sometimes asked whether it’s helpful to bring up history or ‘go over old ground’, with the implication being that this only complicates and inflames the issues. But how can you prepare populations for peace without breaking down one-sided understandings of conflict that deny the other side’s losses and grievances? It’s never too early to deal with the past, but it can easily become too late. We’ve recently seen evidence of how long-standing conspiracy theories can easily become normalised in the Armenian-Azerbaijani context at the highest level, with Ilham Aliyev and Nikol Pashinyan recently repeating such denials in public forums. As their title suggests, these films offer an alternative, more challenging pathway to a unified and complete historical narrative.

Secondly, these films are significant as a bridge between lived and learned experience. The dying out of the last survivors of the Holocaust during the Second World War has brought home to the world the significance of eyewitness testimony in countering denialism. The Karabakh conflict entered its fourth decade in 2018, and some of the interviewees in the Parts of a Circle films who were protagonists in the events of 1988-94, such as Igor Muradyan, have already passed away. These films, and the wider collection of interviews that they have generated, are consequently an educational and research resource that will accumulate in value over time. At the same time there is a younger generation which has had very limited exposure to knowledge about the conflict. South Caucasian history textbooks, for example, are notoriously short on information about the conflicts in the early 1990s. These films offer not only a source of direct information about events that are not well transmitted in Armenian and Azerbaijani societies, but also a perspective on the viewpoints from which that information is perceived.

Thirdly, the films are significant as an example of a cross-conflict initiative that has endured through the most challenging of circumstances. Some of those who saw the trilogy in the region in 2017-18 were surprised that such a project was still possible. Moreover, I think that this initiative demonstrates the value of long-term strategic intervention, building up relationships over time and creating the space for both challenge and consensus. This may contribute more to the peace process than one-off events or journalists’ visits such as the one we saw last year, significant though these may be as precedents. Parts of a Circle was possible because of many years of previous work, creating the reserves of trust that allowed the teams to address some of the most painful episodes in the history of Armenian-Azerbaijani relations on film together.

There’s been no single or typical reaction to the films in the region, but one common observation is that these films counter myths. In a mediascape saturated with stereotypes and myth-making, that’s an important contribution.

ES: When do you expect the film to become available to the public?

LB: We are planning to make the film available on the Conciliation Resources website (www.c-r.org/partsofacircle) in mid-April. We are discussing with the Parts of a Circle network how and when to make the original trilogy available. Several peacebuilding organisations across the region have the films and are using them in their programming.