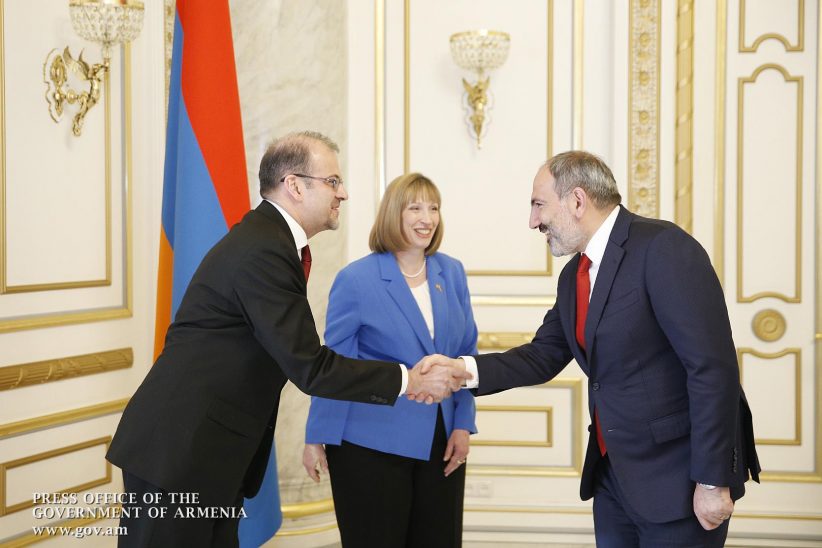 The article was published on Cacianalyst.org, a publication of the Central Asia – Caucasus Institute and Silk Road Studies Program Joint Center

Armenia’s 2018 Velvet Revolution raised hopes for a reinvigoration of the country’s decades-long partnership with the U.S. However, this relationship remains stagnant, despite the visit of a U.S. delegation led by National Security Advisor John Bolton in October 2018 and the subsequent visit of Deputy Assistant Secretary George Kent to Yerevan in May 2019, resulting in the formal elevation of Armenia’s relations with the U.S. to the level of “strategic dialogue.” Moreover, Yerevan’s decision to dispatch a military-humanitarian mission to Syria remains an irritant in its interaction with Washington. As a consequence, the ties have reached a historical low-point in comparison with the improving cooperation between the U.S. and other Caucasian states.

BACKGROUND: After becoming Prime Minister, Nikol Pashinyan declared a commitment to democratic values and a vigorous ambition to implement fundamental reforms. Pashinyan’s administration has frequently stated that the regime change had no geopolitical context and will not imply shifts in Armenia’s foreign policy, but “enrich it with new content.” Amid the country’s bandwagoning with Russia, the declared “Armenocentrism” as a slogan for the country’s “renewed diplomacy” does not envision any revaluation of Armenia’s political perceptions, national interests, challenges and priorities. Instead, Pashinyan’s government proceeds on the course set by its predecessors in serving Russia’s international agenda. These prerequisites have given Armenia a limited scope for independent decision-making, increasing Yerevan’s susceptibility to the Kremlin’s influence and leaving little room for sober and critical appraisal of regional and global policy dynamics. In result, Pashinyan’s foreign policy prioritizes the advancement of the Eurasian Economic Union, rather than reshaping national policy imperatives. Vis-à-vis the West, Pashinyan’s team has drawn U.S. criticism for failing to invest sufficiently politically and economically in Armenia’s democratic development.

Against this backdrop, Yerevan’s ability to interact positively with the Trump administration is limited given its geopolitical collision course with Russia and China, compounded with escalating diplomatic tensions with Iran. However, the U.S. has long been a critical supporter of Armenia, having invested more than US$ 2 billion in the country over two decades, including US$ 300 million allocated for Armenia’s security sector.

In the wake of Velvet Revolution, the new ruling elite sought to capitalize on domestic democratization as a foreign policy tool in order to attract financial assistance from the West. Although the normative democratization agenda was a more prominent feature of U.S. foreign policy during the Clinton, Bush and to some extent Obama administrations than under Trump, Yerevan has sought to capitalize on the outcomes of the Velvet Revolution while retaining its foreign-political configuration intact. Relations with the West and particularly with Washington have remained cautious since Yerevan perceives at least tacit acceptance from Moscow as a necessary condition for any serious step in this direction. In addition, mostly due to the traditional tilt of the Armenian Diaspora lobbyist organizations towards the Democratic Party, the Armenian government has continued to work mainly with Democrats even after Trump’s inauguration, neglecting important recalibrations in U.S. foreign policy undertaken by the Trump administration.

Parliament Speaker Ararat Mirzoyan’s visit to Washington DC in July added even more ambiguity. The parliamentary delegation not only arrived without a portfolio of proposals to intensify the relationship, but also expressed disappointment with Washington’s failure to appreciate democratic institution building in Armenia and to comprehend Armenia’s need to develop relations with Iran.

The situation has been compounded due to miscommunication stemming from the insufficient expertise of some top representatives of Armenia’s post-revolutionary elite, who have used terminology and arguments indicating a poor understanding of Washington’s regional intentions and global strategy, which has given rise to confusion in Washington. Presumably, Yerevan has misinterpreted and underestimated delicate diplomatic messages from the Trump administration pertaining to Armenia’s involvement in Syria or the evolving U.S. regional and global strategy. In turn, the impression is that Armenia’s Ministry of Foreign Affairs has made insufficient efforts to brief other government representatives or parliamentarians on the problems in interactions with the U.S.

IMPLICATIONS: When discussing Armenia’s foreign policy choices, the systemic dependence on Russia and its immense impact on Armenia often appears as the “elephant in the room,” significantly impeding Armenia’s independent decision-making. This mind-set derives from the political perceptions constituting Armenia’s post-Soviet political identity – still widely prevalent among the political elite – that Russia’s zero-sum domination of the Caucasus at the expense of Armenia’s sovereignly is to be taken for granted. However, closer scrutiny reveals that in at least some cases, anticipations of the Kremlin’s adverse reactions have been exaggerated.

In this light, Pashinyan should focus on the task of transforming Armenia’s political identity without speculating on Russia’s potential reactions, instead concentrating on enhancing Armenia’s overall viability and institutional resilience through diversification. Instead of complaining of Washington’s indifference to Armenia’s domestic political achievements, Yerevan should seek to add substance to the “strategic dialogue” with the U.S., increasing Armenia’s significance for the Trump administration. Following the decades-long U.S. material and political assistance to Armenia; Yerevan could take steps to mitigate the impact of several actions it has undertaken during 2019 as an effect of miscommunications and misunderstandings.

Calling off the notorious military-humanitarian mission in Syria would be a significant step towards improving the relationship with the United States. Pashinyan’s Syrian overture is widely understood in Washington as unfriendly, and as underpinning Russia’s political legitimization of its intervention in Syria. From Yerevan’s perspective, the Syrian mission aimed to underscore Pashinyan’s support for Russia’s international undertakings, expecting to gain freedom of manoeuver domestically in return. Although this move appeased Moscow, it did not force Armenia to deploy the mission. Withdrawing from Syria would be a key step towards bringing the ties with Washington back on a positive track. To soothe Moscow’s reaction, Yerevan could declare that Armenia will abstain from other peacekeeping/assistance missions as well, as a new national principle. This would be a logical continuation of Foreign Minister Matsakanyan’s statement that Armenia’s “foreign-policy making is not about serving the interests of great powers.”

It is also in Armenia’s interests to recover a positive image in relation to European energy security architecture. Indeed, several analysts have underlined the destructive impact of Yerevan’s consistent threats to Caucasian energy infrastructure. In turn, these threats stem from a long-lasting misconception that the military threat Armenia is capable of projecting against the region’s hydrocarbon arteries serves to deter Azerbaijan from resuming combat actions in Nagorno-Karabakh. While this is hardly the case, the posturing undermines Armenia’s credibility as a partner for the West, while simultaneously playing into Russia’s strategy of manipulating Europe’s energy vulnerabilities. Instead, Yerevan’s constructive participation in the dialogue on Europe’s energy security would markedly contribute to improving Armenia-U.S. relations. Armenia should seek to become a critical security guarantor of vital energy infrastructure, rather than a potential threat, regardless of the conflict with Azerbaijan over Nagorno-Karabakh. Another concrete area of cooperation that would serve to strengthen Armenia-U.S. relations is the establishment of a joint center for assessment of transnational and cyber threats.

Finally, Yerevan should seek to become part of U.S. strategic planning designed to provide a sustained transit corridor to Central Asia and Afghanistan for humanitarian and military purposes. While the Northern Distribution Network has undergone a series of adaptations due to shifts in the international order, Armenia could offer Western partners its own logistical infrastructure in order to assist the capacities of West-East communication. The Arzni Military Airport can serve this purpose. Allowing the U.S. access to this asset as an additional component in its logistics and strategic communications network would encourage the Trump administration to further substantiate its balanced approach towards Armenia and Azerbaijan in terms of politico-military cooperation.

CONCLUSIONS: It will require strong political will to realize these prospects, along with tremendous professional efforts combining diplomatic skills and political knowledge. Indeed, there are clear limitations to Armenia’s capacity for strategic interaction with the West. However, opportunities exist for harmonizing enhanced ties with the U.S. with Armenia’s strategic choices. If Pashinyan’s government comprehends these opportunities, it also needs to develop conceptual clarity on Armenia’s relationship with both powers based on firm red lines drawn by the Armenian government. The recipe for ameliorating Armenia’s ties with the U.S. is less about finding a proper format for consultations with the Republican Party in Washington than about discarding some remnants of post-Soviet political mentality, fueling miscommunication and preventing adequate assessments of U.S. regional and global priorities. Importantly, Armenia should seek to alter its relationship to Washington from being an “aid seeker” to becoming a regional net-security provider, even capable of assuming some elements of burden-sharing.

Eduard Abrahamyan is a foreign policy scholar. He is a CACI 2017 Rumsfeld Fellow and a Senior Fellow with the London-based Institute for Statecraft.

Perspectives of EAEU – EU Relations: A Look from Armenia

Engineering the Future: Panel at WCIT 2019