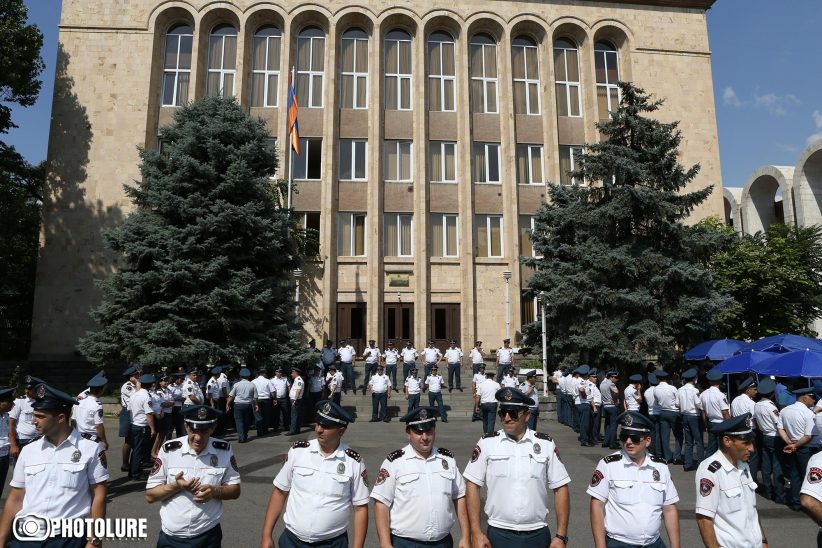 On February 6, Armenia’s National Assembly approved a bill calling for an April 5 referendum, where citizens will vote on whether or not to dissolve the country’s Constitutional Court. The referendum, if approved, would amend Armenia’s constitution to eliminate a grandfather clause allowing judges appointed before April 2018, when a 12-year term limit was implemented, to serve beyond that limit. As a result, seven of the Court’s nine judges, all of whom were appointed before the country’s 2018 Velvet Revolution, would be removed.

The move is intended to be the culmination of an ongoing feud between Prime Minister Nikol Pashinyan and the Constitutional Court’s prerevolutionary judges, particularly court head Hrayr Tovmasyan, who is widely seen as an ally of the previous authorities and an impediment to the current administration’s efforts to implement political and judicial reform in the country.

For instance, the Constitutional Court has issued numerous vague rulings in the ongoing case against former President Robert Kocharyan, threatening to derail the current government’s ongoing attempts to implement transitional justice programs. Kocharyan was arrested in July 2018 and charged with “overthrowing the constitutional order” for his role in the events of March 1, 2008, when nearly a dozen protesters were killed by police and army units in Yerevan.

The Court’s decisions in this case have been widely seen in the context of the close relations enjoyed by many of the Court’s judges with figures from the Kocharyan government. Indeed, Armenia’s judiciary is widely considered to be among the country’s most corrupt and least trusted state bodies and is reported to suffer from pervasive corruption at all levels.

Nonetheless, the country’s Constitutional Court has often been singled out for corruption and political bias, given its judges’ high political profiles and wide-ranging powers. In fact, within the framework of the current administration’s broader judicial reform efforts, it is clear that Pashinyan has prioritized constitutional court reform in particular and has been working for some time now to remove Tovmasyan and other prerevolutionary judges from their posts.

In previous attempts to remove Tovmasyan last year, the National Assembly’s ruling My Step alliance approved both a direct appeal to the Constitutional Court to impeach Tovmasyan and legislation providing judges with significant financial incentives to voluntarily resign. Both attempts ultimately proved unsuccessful and provoked fierce criticism from opposition lawmakers and politicians.

During the debate over the referendum bill in the National Assembly, Vahagn Hovakimyan, a My Step lawmaker and one of the bill’s authors, pointed to the experiences of Ukraine and Moldova, two fellow post-Soviet countries that have also overcome constitutional court crises. Like Armenia, both countries suffered from political crises over constitutional courts that were widely seen to be biased in favor of certain political actors.

Ukraine’s first constitutional court crisis arose in 2003, when the country’s Constitutional Court, under pressure from then-President Leonid Kuchma, cleared Kuchma to run for a third consecutive term despite a constitutional prohibition on presidents serving more than two consecutive terms. Though Kuchma ultimately chose not to run, the court had made its loyalty to the then-president clear.

Following the 2004 Orange Revolution, the Verkhovna Rada, Ukraine’s unicameral legislature, passed constitutional amendments limiting presidential powers by increasing the authority of the prime minister and the cabinet and institutionalizing political parties as formal elements of power in the Rada. These amendments, commonly known as the imperative mandate, would remain in force until 2010, when Ukraine’s second constitutional court crisis erupted.

Though the court’s ruling was reversed in 2014 following the Euromaidan Revolution that ousted Yanukovych from power, the court had, again, demonstrated its willingness to prioritize loyalty to the ruling elite over respect for the rule of law. As one analyst described it, the court had become “a permanent battleground for politics” in the country.

The aftermath of the Euromaidan provided the Ukrainian government an opportunity to ensure that the country’s Constitutional Court conducted itself in a truly independent manner. First, in 2014, the Rada removed five of the Court’s 18 judges for “violating their oath [of office] by letting Yanukovych monopolize power”.

In an interview with CivilNet, Ukrainian journalist and historian Maxim Tsarenko praised the Ukrainian government’s reform efforts. Tsarenko noted the contrast between the Constitutional Court’s functioning under previous administrations, when it effectively served the interests of the ruling elite, and its functioning under the current administration of President Volodymyr Zelensky, when it has acted much more independently. Indeed, the Court has blocked no less than three of Zelensky’s major legislative initiatives in the past year alone.

Moldova’s first constitutional court crisis emerged in 2016, when the country’s Constitutional Court nullified a constitutional amendment passed in 2000 that eliminated direct presidential elections. It was widely understood that the Court’s decision came about as a result of pressure from Vladimir Plahotniuc, Moldova’s richest man, who ostensibly believed that direct elections would benefit his political allies in the Democratic Party.

Although Plahotniuc’s move spectacularly backfired—the 2016 presidential elections in Moldova were ultimately won by Socialist Party candidate Igor Dodon—the Court’s ruling nonetheless reflected its status “as a body that serves narrow political interests,” rather than an “impartial arbiter” that upholds the rule of law.

Moldova’s next constitutional court crisis arose in 2019, when the Constitutional Court, again under pressure from Plahotniuc, dissolved the country’s parliament, invalidated the formation of a new government, and called for snap polls after legislative elections resulted in an unprecedented governing coalition between the pro-European ACUM alliance and the pro-Russian Socialist Party. The Court then moved to install Pavel Filip, a Democratic Party lawmaker and a close ally of Plahotniuc, as interim president.

Following weeks of mounting pressure from the European Union, the Russian Federation, and the United States, Moldova’s Constitutional Court reversed its rulings, leading to the resignation of Filip and all six Court judges. Plahotniuc himself fled the country. The ACUM-Socialist coalition welcomed the judges’ mass resignation and proceeded to install new judges, calling for the establishment of a “truly independent” judiciary in the country.

As in Ukraine and Moldova, the ongoing constitutional crisis in Armenia centers on widespread perceptions that the country’s Constitutional Court is captured by a particular political interest group and displays more loyalty to its political backers than to a presumed commitment to independence, impartiality, and international norms and standards.

The experiences of Ukraine and Moldova demonstrate the difficulty in dislodging state institutions from political and oligarchic capture. In Ukraine, it took not one, but two popular uprisings just to initiate the constitutional court reform process. In Moldova, it took persistent pressure from multiple international heavyweights to do so.