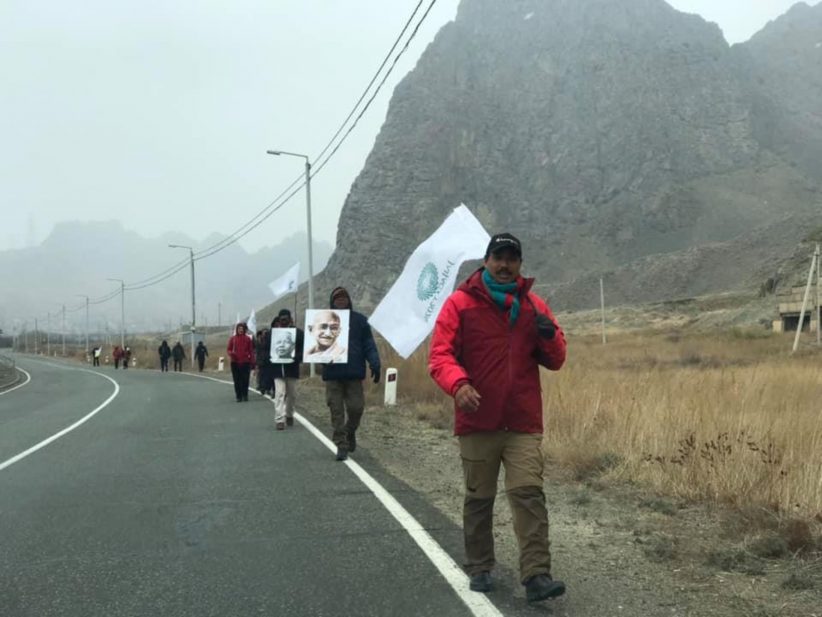 The Jai Jagat march for peace and justice, which starts from New Delhi and ends in Geneva, has arrived in Armenia.  The marchers will go from the southern town of Agarak, on the Iranian border, all the way to Sadakhlo on the Georgian border.

The march began in New Delhi on October 2 of last year to commemorate the 150th anniversary of Mahatma Gandhi’s birth. The 10,000 kilometer global march for peace and justice will pass through 10 countries and will last 365 days in total, with nonviolent and justice-themed training and other events taking place along the way.

The purpose of the march is to push for the implementation of the United Nations sustainability goals, as well as poverty eradication, social inclusion, climate justice and nonviolent conflict resolution.

The 2020 Jai Jagat march participants arrived at Yerevan’s Zvartnots Airport on February 12. The marchers had already completed a 121 day trek through India, and are about to set off on 244 days of marching through the Caucasus and Europe, all the way to Geneva, Switzerland.

In Yerevan, they were welcomed by K. D. Dewal, Ambassador of India to Armenia, and visited the Armenian Genocide Memorial at Tsitsernakaberd.

The participants also visited the Indian Ambassador’s residence, and were present during a parliament session where they were welcomed by Ararat Mirzoyan, President of the National Assembly.

When the marchers arrive in Geneva, the city will host them for a week, between September 26 to October 2, 2020, where various workshops, advocacy meetings and cultural events will be organized.

In addition, United Nations delegates will gather in Geneva on those dates, with the organizers hoping the march will be better able to raise awareness and gain further legitimacy whilst the delegates of the world’s nations are gathered in the same city.

The march itself is inspired by Mahatma Gandhi’s 24-day Salt March in 1930, which was organized in order to campaign against the British Empire’s taxation of salt in colonial India.

According to Arsen Kharatyan, one of the coordinators, the march has been in the works for five years, with the organizers in India working with Armenian organizers since 2015.

Jill Carl Harris stated that, “The high degree of Gandhian nonviolence attitudes in Armenia are very uplifting.” She added that she was impressed by the commitment to nonviolent strategies used by many Armenians seeking change during the Velvet Revolution of 2018.

Harris also remarked that the organizers wanted to march through Azerbaijan’s Nakhijevan region into Armenia, but it became apparent that that would not be possible.

Furthermore, when the marchers arrive in Syunik, just north of the Iranian border, they will be joined by separate marches which have been traveling through Iran.

Once they travel through Armenia, they will march across Georgia to the port city of Batumi on the Black Sea, where they will take ships to Bulgaria. From Bulgaria, they will cross the Balkans and Central Europe, to Geneva.