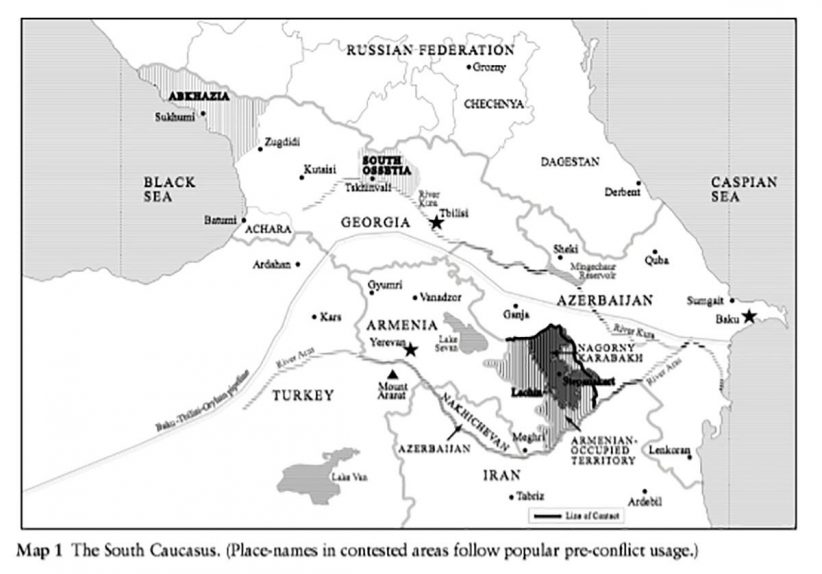 Nobody writes a book about the Armenian-Azerbaijani conflict and expects to get off lightly. I am grateful to Tigran Grigoryan for his critical review, published by CivilNet, of my new book, Armenia and Azerbaijan: Anatomy of a Rivalry. It might be helpful to acknowledge that I’ve known Tigran for some years, having first met him in Nagorny Karabakh in around 2012. More recently, I have been following his perceptive analysis of domestic developments in the de facto republic with great interest. His analysis has become especially invaluable since I returned to work for an international peacebuilding organization, Conciliation Resources, whose staff cannot visit the territory due to an Azerbaijani-imposed ban.

I was sorry to read that Tigran found my work disappointing, although given that book-length studies by outsiders of the Armenian-Azerbaijani conflict are few and far between, whether any single volume could satisfy all expectations is moot. There are some aspects to Tigran’s critique which are fair enough. I can easily concede that my writing needs improvement. And it is certainly true that the book covers pre-revolutionary Armenian realities, rather than those following the Velvet Revolution. I completed the first draft as the Velvet Revolution was unfolding, and it would have been foolish to suddenly re-write the book in the light of those events when their long-term trajectory – even from today’s perspective – is unclear. My book is focused on the 1994-2018 period, the first quarter-century of the Armenian-Azerbaijani rivalry. (In another work, forthcoming this summer, together with Anna Ohanyan and a group of co-contributors I address the new realities of post-revolutionary Armenia.)

That brings me to the first of three aspects to Tigran’s critique which need rebuttal. This is his claim that my book omits the agency of Karabakh Armenians and their struggle for rights. In his review, Tigran does not mention that one of the book’s chapters, entitled ‘Unrecognised reality’, is dedicated to the Nagorno-Karabakh Republic. The chapter examines, among other issues, the dynamic of democratisation in the territory. Karabakh Armenians have indeed been struggling for their rights not only to self-determination, but also to political participation, human rights and the rule of law in their own republic. This is analysed in some detail in my book, and recalls a central argument running through all of my academic work that unrecognized or partially recognized republics in Eurasia cannot be dismissed as ‘puppet regimes’ or marionettes. These ‘de facto states’ exercise agency and their viability cannot be reduced to their sources of patronage. And as Tigran might be aware, I have since 2005 consistently advocated for the participation of Karabakh Armenians in the peace process, as no process purporting to settle the legal status of their political identity can do so without their participation.

Yet this does not mean that the Karabakh Armenian narrative is the only thread in telling the story of the Armenian-Azerbaijani conflict today. Even historically, the course of events in 1988-1990 raises important questions that a Karabakh-centric narrative frame cannot explain. If the conflict was only or mainly about Karabakh Armenian status, then why was violence directed against Armenians and Azerbaijanis far from disputed borders? Why, indeed, were the first flows of displacement from locations far from Karabakh, among defenceless minorities who had nothing to do with – and knew little about – the issues in the oblast’? There is clearly a much wider framework needed to explain these outcomes. Part of the aim of my book was to take a wider view that could address these issues, but not one that omits or denies Karabakh Armenian agency.

Tigran also suggests that I reproduce what he calls a propaganda myth that the first displacements were among Azerbaijanis fleeing from Kapan in southern Armenia in November 1987 – which Armenian historians say is not true. For those that may not be aware of this controversy, the significance of the claim that Azerbaijanis were displaced already at that time is that it purportedly ‘proves’ that Azerbaijanis were the initial victims, thereby suggesting that it was Armenians who began the cycle of reciprocal ethnic cleansing. In fact, I do not affirm or deny this in my book. I only mention this controversy in a footnote, explaining that the Kapan episode is the subject of bitter polemics and citing the respective sources. It would have required a different kind of research to come up with any kind of ‘definitive’ answer, assuming that this is possible. But that is not the point. The controversy about Kapan has always been concerned with the question of ‘who started it’, and not ‘why it started’. I am interested in the second question.

A second area where I believe Tigran’s review misrepresents my work is his claim that my book unequivocally depicts Armenians as aggressors and Azerbaijanis as victims. If my book was silent on the objective reasons why Karabakh Armenians held grievances about their situation in Soviet Azerbaijan, on the pogroms and massacres of Armenians in Sumgait, Baku, Maragha and other locations, on the mass forced displacement of Armenians from Azerbaijan, or on the fact that most of those who live in the occupied territories around Nagorny Karabakh live there because they were displaced from locations in Azerbaijan, then Tigran would have a point. However, my text is not silent on any of these events. On the contrary, it acknowledges them and actively seeks to provide explanations as to why they happened.

Yes, the woman on the cover does – in this case – happen to be an Azerbaijani, although there is nothing – no flags, symbols or landmarks – to identify her as such, except her son’s uniform (to those familiar with Azerbaijani military uniforms in the 1990s) and, perhaps, his moustache. I thought long and hard about whether to choose this image (the alternative shortlisted with the publisher was a military image). I decided – perhaps wrongly – that this image transcends nationality, and depicts a common tragedy that people across this conflict, as well as across the Caucasus and beyond, can identify with. If readers can only see an ‘Azerbaijani’ in this picture, then that is a sad reflection of where we are.

The third area where I believe Tigran has misread my work is in his rejection of my perspectives on the roles of emotion. He writes that my work is nothing short of ‘orientalist’, evoking Edward Said’s seminal work on ‘orientalism’: the tendency of Western scholars to depict non-Western, and especially Middle Eastern, politics as driven by irrational, unchanging and primitive emotions – as opposed to the purportedly rational and enlightened motives of Europeans. Tigran is essentially suggesting that I explain the Armenian-Azerbaijani conflict as being driven by ‘ancient hatreds’. But as I observe in the book, explaining conflicts as proceeding from ‘ancient hatreds’ trope has been mercifully less prominent in the South Caucasus as compared to the Balkans. I cannot think of any serious scholarly work which depicts South Caucasian conflicts in this light. Mine certainly doesn’t.

I draw on the literature about emotions not as the ‘driving force’ of the Armenian-Azerbaijani conflict, as Tigran puts it, but to offer insights on far more specific questions: namely, why did communal violence break out in 1988 in advance of the formation of national movements, and why did it target marginal and non-threatening minorities? Even then, I am careful in arguing that emotions are just part of a much more complex set of causes. And the argument about emotions appears in just one chapter. Other chapters discuss authoritarian regimes, strategic interactions and the military balance, the international geopolitics of the rivalry, de facto statehood and the problems of the peace process. To argue that any single factor can explain a 30-year inter-state rivalry is reductive in the extreme. To suggest that my book makes such an argument is caricature.

At the same time, one does not have to subscribe to the ‘ancient hatreds’ school of thought (no self-respecting scholar does) to recognise the importance of emotions in politics. There is a booming literature on the roles of emotion across many fields of political science. There is an emotional narrative at the heart of almost every popular theory of nationalism, for example, whether it is Ernest Gellner’s Ruritanians resentful of Megalomanian rule, or Rogers Brubaker’s ‘nationalising state’ that feels compelled to dominate its newly sovereign space with its own language, myths and markers of identity. And as the work of Gerard Toal has recently argued, we mistakenly think of geopolitics as a rational political art divorced from sentimental fantasies and irrational impulses. Coming from a country that has just enacted an utterly irrational act of gross self-harm on itself, I know.

It is consequently wrong to suggest that secessionism and nationalist mobilization in Western Europe, including my own country, cannot be explained in the same terms. Some of the best analysis that I have read about Brexit, written by Fintan O’Toole of The Irish Times, emphasises the role of emotions: English imperial nostalgia, resentment of Britain’s supposedly insufficiently prominent place on the world stage, and hysterical self-pity. As a Briton, I find O’Toole’s language and analysis neither shocking nor intellectually irresponsible, but a salutary and necessary challenge to geopolitical narcissism.

Britain, of course, is not locked in an asymmetric rivalry with an opponent that is actively threatening and using force against it. I am in fact in agreement with Tigran that Azerbaijan’s policy of seeking to force Armenia into submission is central to the radicalisation of Armenian attitudes towards territories, a point I argue in the book’s conclusion. Had he highlighted this, and my equally critical approach to Azerbaijani geopolitical culture, Tigran would have written a fairer review of my work. Nevertheless, I would like to once again thank him for his comments and corrections. An outside observer never stops learning about conflicts, and no one knows conflicts better than those who actually have to live through them. I invite readers to read Tigran’s review, read my book and make up their own minds.