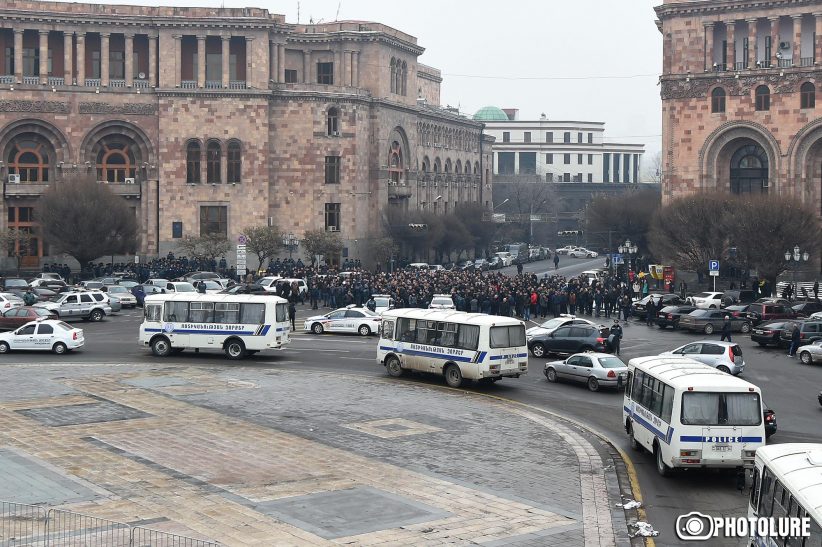 On January 20, more than 250 cattle farmers from across Armenia blocked one of the main avenues in central Yerevan and held a protest in front of the Government House building in Republic Square. The demonstration came on the heels of a similar but smaller protest last week over a new policy from the State Service for Food Safety, that requires farmes to only operate in licensed slaughterhouses.

The department, which operates under Armenia’s Ministry of Agriculture, states that the directive aims to guarantee sanitary and hygienic conditions for cattle slaughter in Armenia.

The cattle farmers, in turn, note that the law already mandates checks on animals before the slaughter of cattle on private property, the process currently employed by many cattle farmers. In a conversation with CivilNet, one of the protesters emphasized that the conditions for slaughter on private property conform with sanitary standards. He said, “We have places for slaughter…and we keep them clean. If they [government officials] don’t believe it, let them send a person [to] check it out”.

The protesters have noted their preference to continue conducting slaughters on private property. In this regard, the cattle farmers are not opposed to the operation of licensed slaughterhouses in Armenia in general, but rather the mandatory nature of the new policy.

According to the farmers, a number of problems arise when considering the government’s new policy. First, there is a general shortage of qualified veterinarians in many of the country’s smaller towns and villages, which already complicates many farmers’ slaughter schedules.

Taking all of these factors into consideration, the farmers claim that, under the directive, it becomes economically unprofitable for private, small-scale farmers to keep cattle.

The State Service for Food Safety has publicly stated that it will not make concessions to the protesters and has stuck by its claim that the new policy is being implemented in an effort to improve sanitary and hygienic conditions for cattle slaughter. In a conversation with CivilNet, Artur Shatvoryan from the State Service for Food Safety brought up the example from “neighboring Georgia, [where] there are 80 slaughterhouses, and this problem [of private slaughter] has disappeared”.

The Minister of Economy, Tigran Khachatryan, also addressed the protests during a recent interview with CivilNet. According to him, there is a “misconception” that the new directive will benefit slaughterhouses, but harm farmers and herders. He insisted that time will very quickly show that [all] sides benefit from the new policy.

Nevertheless, the cattle farmers have vowed to continue demonstrating until Prime Minister Nikol Pashinyan agrees to meet with them and listen to their concerns. In the meantime, experts predict that meat prices in Armenia may rise by up to ten percent under the new policy.