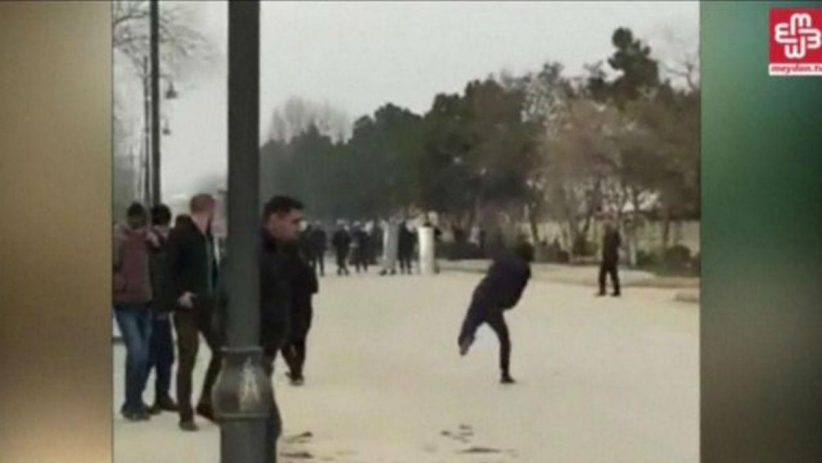 The attempted assassination of the Ilham Aliyev-appointed mayor of Ganja on July 3 has received unprecedented amount of public support in Azerbaijan. With mayor Elmar Veliyev paralyzed and his bodyguard also seriously injured, dozens of dedications to the would-be assassin Yunis Safarov have popped up on youtube with hundreds of thousands of views and many thousands of approving ‘likes.’

On July 10 during a follow-up protest in the center of Ganja, two senior police officials were stabbed to death, in what appeared to be targeted assassinations. Nearly all prominent critics of the Aliyev regime have spoken out about the events in Ganja; few have condemned the violence outright.

What was behind this violence and what explains such reactions? And what do these events may mean for Armenia?

Past high-profile assassinations in Azerbaijan, such as those of deputy defense minister in 2009 and a senior prosecutor in 2002, typically remained unresolved with dominant public suspicion being that they were organized by other, more powerful members of the Aliyev regime. What makes this case different is that the dominant suspicion this time is that 34-year-old Safarov, a Ganja native raised in Moscow and who only recently returned to his native town, acted in response to Veliyev’s many abuses.

In that sense, public reactions to the assassination attempt and subsequent killings of police officers bear similarity to the Sasna Tsrer case in Armenia. Almost two years ago, a group of war veterans and political activists, long harassed by the government and unable to exact change through peaceful protests, took up arms, captured a police base in Yerevan and killed three policemen in the process.

Of course, there are also key differences. Unlike Serzh Sargsyan, Ilham Aliyev has much less patience for any form of opposition activism, let alone one involving violence against his regime. Already at least one of the suspects was killed – likely executed – by the police, others – including Safarov – were beaten after they were detained, dozens of peoples have been arrested around the country merely for praising Safarov’s actions online. Security forces have been making preemptive arrests.

The Aliyev regime has tried to spin the case as one involving Shiite Islamic radicals that are also somehow in league with Armenia. However, while Veliyev was known for cracking down on religious holidays such as Ashura, there has been no clear evidence furnished that either Safarov, or the other individuals named, had religious motives. One of the suspects, who was killed by police, is believed to have done time for an “honor killing” involving a family member and others may have also had criminal record. As such they are more likely to be connected to organized crime groups, known in the former Soviet Union as “thieves at law.”

In the absence of due process, these “thieves” command unparalleled public influence in Azerbaijan as informal arbiters in business disputes. When a top thief Rovshan Lenkoransky (Janiyev) was killed in 2016 in Istanbul his body was flown to Azerbaijan on a private plane and tens of thousands attended his funeral; memorial at his grave rivals that of Heydar Aliyev. Soon after, another influential thief Lotu Quli (Nadir Salifov) received an early release from Azerbaijani prison to take over the crime syndicate in Turkey and interviews with him have been featured in government-run news media.

Only the perpetrators could speak to their true motives, but Azerbaijani reactions to assassinations in Ganja point to widespread and likely growing dissatisfaction with the Aliyev regime. Recent change of government in Armenia, brought about by massive, peaceful protests, has been viewed with bewilderment and envy in Azerbaijan ruled by the same family for most of the last five decades and now entering a tail end of massive oil and gas revenue boom.

Ever since the Azerbaijani currency depreciation in 2015, signs of public dissatisfaction were evident in the form of protests and government crackdowns. The situation was stabilized in large part due to the April 2016 escalation in Karabakh. It remains to be seen if Aliyev would again turn to that tool of relieving domestic pressure by shifting public attention to enemies abroad and if it could again be similarly effective.