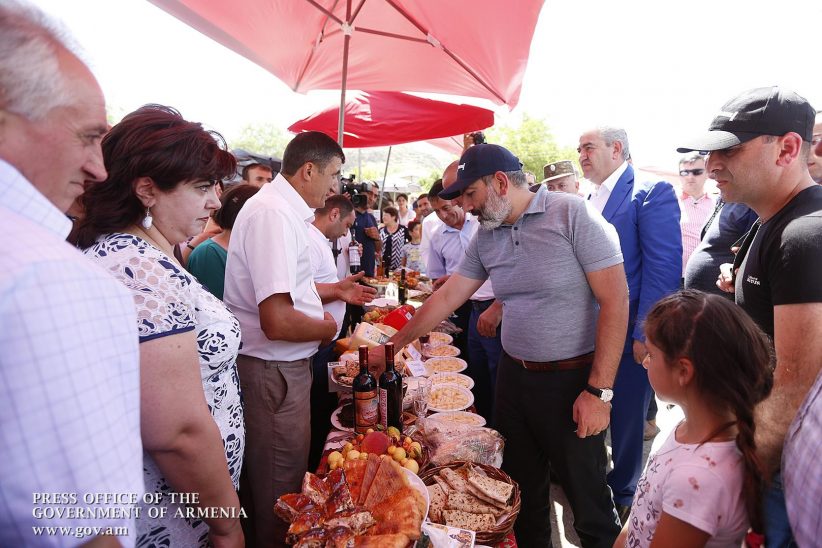 Hayastan All Armenian Fund charity organization’s Director Ara Vardanyan was arrested on July 2 on charges of using roughly 130 million Armenian Drams (270,000 USD) of the fund’s budget for online gambling between 2016 and 2018. The information was reported by Armenia’s National Security Service (NSS).

The Fund raises its money each year on Thanksgiving Day in Los Angeles. Last year, Hayastan All Armenian Fund raised 12.505.456 million USD in donations and pledges for agricultural projects in Nagorno-Karabakh. The Hayastan All Armenian Fund has implemented 1,100 major projects and invested 350 million USD in Armenia and Nagorno-Karabakh since its creation in 1992.

On July 5, Ara Vardanyan was released from custody. He denies the charges brought against him.

On July 3, the Special Investigation Service issued a statement that former Defense Minister, Colonel General Mikael Harutyunyan will be a defendant in the March 1 case. He is being accused of overthrowing the constitutional order with prior consent of other individuals from February 23 to March 2, 2008.

The statement reads that, “[Former] Defense Minister Mikael Harutyunyan and other officials violated the constitution of the Republic of Armenia when they declared a military order and used the armed forces against citizens participating in peaceful rallies.”

An investigation into Mikael Harutyunyan’s involvement has begun, and a petition for an arrest warrant has been filed with the court.

On February 19, 2008, following a presidential election that was marked by electoral fraud and abuse of administrative resource, Serzh Sargsyan became the president of Armenia. His opponent, the first president of Armenia Levon Ter-Petrossian and his supporters refused to accept the results of the election. President Robert Kocharyan announced a state of emergency and army subdivisions entered Yerevan. The growing rallies and peaceful demonstrations were met with heavy use of force and firearms by the authorities on March 1, resulting in deaths of ten people, including two policemen.

Armenia’s former President Robert Kocharyan has received a notice to appear  before the Special Investigation Service of Republic of Armenia regarding the killing of protesters that followed the 2008 presidential election.

Kocharyan’s spokesperson, Victor Soghomonyan, announced that Kocharyan is not in Armenia and that he himself is looking forward to the reopening of the March 1 case. Soghomonyan mentioned that the March 1 case shows that the Special Investigative Service is becoming a daily tool in the hands of the authorities.

Seyran Ohanyan, then armed forces chief of staff, was also summoned for questioning.

Read more: Robert Kocharyan to be Questioned About March 2008 Killings

Former President Serzh Sargsyan’s brother, Aleksandr Sargsyan, was detained with his son on July 4 after the National Security Service (NSS) of Armenia conducted a several-hour long search of their residence in Yerevan.

Following the arrest on July 4, Armenia’s Prosecutor General’s Office announced that it has reopened a dropped criminal case from 2007 related to charges, according to which Alexander Sargsyan’s son, while under the influence of drugs, fired at a citizen. According the Prosecutor General’s Office, on June 29, Davit Simonyan presented them a notice regarding an incident that occured in 2007. Simonyan writes that eleven years ago, Aleksandr Sargsyan’s son, Hayk Sargsyan, shot him under the influence of illegal substances, but another person was charged with the crime. The charge was later dropped.

On July 5, NSS released a statement and a video about the search at Sargsyans’ residence. The NSS found weapons and illegal substances belonging to Alexander Sargsyan’s other son, Narek Sargsyan. In addition, 115,000 USD, €27,000 in cash and other valuables were found.

It was also revealed that Narek Sargsyan took Martiros Saryan’s  280,000 USD – worth sketches from one of the painter’s descendant in 2013, promising to pay 28,000 USD and sponsoring a casino in return. However, Sargsyan did not fulfill his promises. Narek Sargsyan and his bodyguard were involved as suspects, arrest warrants have been filed with the court.

In Jermuk, the Prime Minister met with representatives of Lydian Armenia, the company exploiting the Amulsar Gold Mine, and the citizens opposing the exploitation of the mine. Citizens protesting against mine exploitation have blocked the road leading to Amuslar mine for more than ten days, demanding that it not be exploited.

Pashinyan proposed the parties to provide time for the government to investigate the standards by which the mine operates. The demonstrators agreed to this option, provided that the mine not be exploited during that time. Lydian Armenia meanwhile insisted that the mine exploitation works should continue. The roads leading to the mine continue to remain blocked.

Armenia: before the goldrush, the Amulsar exploits

Eduard Babayan, head of security for Deputy of Armenia’s National Assembly Gagik Tsarukyan, has been charged with inflicting severe physical abuse on a victim. The Special Investigative Service of Armenia reports that Babayan was arrested on July 6.

On July 3, the victim, Vyacheslav Harutyunov, told law enforcement officials that he had been assaulted by Tsarukyan and his bodyguard Babayan. According to Harutyunov, the clash took place in the administrative building of the Olympic Committee of Armenia, which is headed by Tsarukyan, and that the incident occured in the presence of the Minister of Emergency Situations Hrachya Rostomyan and the President of the Olympic Committee Derenik Gabrielyan.