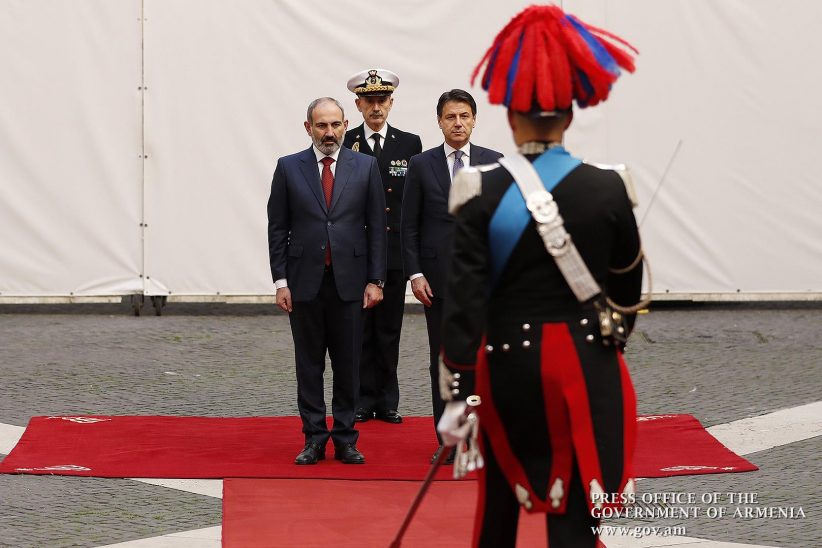 Between the 20th- 22nd of November, Pashinyan embarked on an official visit to Italy, visiting the cities of Venice, Milan and Rome. He met representatives of the Armenian community in Italy, the President of the Italian Trade Agency, Carlo Ferro, President of the Italian Senate, Maria Elisabetta Casellati, and the Prime Minister of Italy, Giuseppe Conte.

Pashinyan was asked a number of questions on numerous topics including, Syria, the Armenian Genocide recognition resolution in the US House of Representatives, the conflict with Azerbaijan and relations with Turkey.

He also commented on the passage of the resolution in the US House of Representatives recognizing the events of 1915 as “genocide.”

The PM stated: “It is very, very important. It helps to prevent possible future genocides,” and that this decision can “change the atmosphere in our region.” Pashinyan emphasized the importance of this decision, and how this was a “message,” that showed “aggressive policies will not be accepted by the international community.”

Pashinyan continued that, “Turkey is still perceived by Armenians as a possible threat to our security,” and remarked that though the border with Turkey is closed, “(the border) has been closed, but only from the Turkish side, not the Armenian side.”

The discussion then turned to the Nagorno Karabakh conflict.

The interviewer asked about the “aggression of Armenia towards Azerbaijan over Nagorno Karabakh.” To which, Pashinyan spoke of the murder of Gurgen Margarian during a NATO seminar in Budapest, who was killed with an axe by Ramil Safarov, an Azerbaijani military officer. Pashinyan reminded the interviewer that: “A few years after he was sentenced to life imprisonment in Hungary, the Azeri officer was extradited to his country. In his homeland he was accepted as a national hero, received a pardon from President Ilham Aliyev, was promoted and secured an apartment in Baku.”

The interviewer then posed a question of conflict resolution to Pashinyan, stating that there is a divergence of assessments of history and other matters by Armenia and Azerbaijan.

Pashinyan stated he wants a solution that is: “acceptable to the people of Armenia, Nagorno Karabakh and Azerbaijan.” He stated he was the first Armenian leader to take a new approach like this and that he received “heavy criticism,” for considering also the interests of Azerbaijani people in his formula.

Pashinyan continued that: “(he hoped Azerbaijani) President Aliyev would make statements similar to mine, I’ve been waiting for over a year, and haven’t heard (anything).” He added that European partners, and the OSCE Minsk group, a group tasked with solving the Nagorno-Karabakh conflict, should encourage the Azerbaijani government to adopt this approach.

Finally, when asked about Azerbaijan being a key energy partner of Italy and whether this would impact Armenia- Italy relations, the Armenian PM responded that, “We have good enough relationships (with Italy) and we hope to make them even better.” He also added that Azerbaijan is a supplier of gas and oil, and that looking to the future would mean recognizing that “the word “energy” is changing rapidly,” adding that renewable energy is the direction of the future, with solar power perhaps being the main energy supplier in Italy one day.