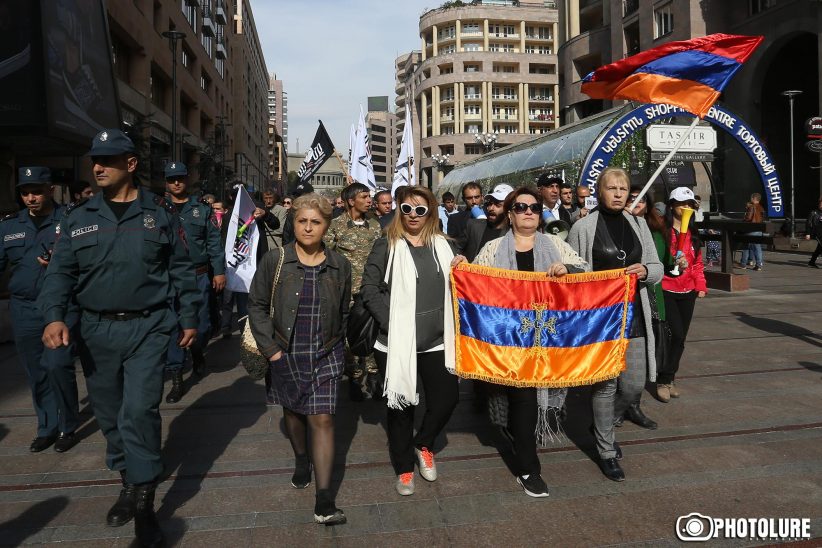 Following the Velvet Revolution of April-May 2018, issues related to Armenia’s embattled LGBT community came to the forefront of the country’s politics. In recent months, Armenia’s political agenda and discourse have been dominated by such issues. Groups connected to the pre-revolutionary government and other opponents of the current administration have begun to take advantage of these developments, manipulating discourses on LGBT issues in an apparent effort to discredit and delegitimize Prime Minister Nikol Pashinyan and his government.

A series of incidents and scandals relating to the LGBT community have dominated Armenia’s politics, press, and social media networks in recent months. Most prominently, controversy has erupted over the awarding of roughly 42,000 U.S. dollars by the Ministry of Education, Science, Culture and Sports toward a documentary film being produced about the life of Mel Daluzyan, a prominent Armenian weightlifting champion who later came out as transgender and now lives in the Netherlands. Outrage in Armenia has been directed not only toward the film’s subject matter, but also the government’s decision to partially fund the film’s production.

As the Daluzyan controversy raged on, another creative project was targeted by conservative activists for similar reasons. In early November, a group of artists staged an open-air, experimental performance called “Emotions and the Bell” in front of the Republic Square metro station in central Yerevan. The avant-garde art project is a women-led initiative that pays homage to 1920s Armenian futurist poetry through spoken word performances and interpretive dance routines. As with the film on Daluzyan, the social media uproar over the performance has centered on both the project’s content—which has attracted accusations of promoting satanism and ‘non-traditional’ sexual orientations—and its funding by the Ministry of Education, Science, Culture and Sports, which allocated about 5,500 U.S. dollars for the performance.

At the same time, cultural issues have also begun to influence lawmaking processes and parliamentary debates. Since the summer, a fierce debate over ‘national values’ has centered on the Istanbul Convention, a Council of Europe treaty that legally defines violence against women and requires state parties to take specific and concrete steps to combat gender-based violence. In Armenia, the convention was signed by the pre-revolutionary government in January 2018, several months before the Velvet Revolution, though the current government still has yet to ratify it. The treaty’s stalled ratification in Armenia is the result of widespread public debate over the treaty, which conservative groups have falsely claimed recognizes the existence of a ‘third gender,’ imposes ‘alien values’ on Armenia, undermines the ‘traditional’ family unit, and legalizes or will ultimately lead to the legalization of same-sex marriage and adoption in Armenia.

Homophobia as a useful component of the opposition’s toolkit

Though the Velvet Revolution ended the Republican Party’s yearslong grip on power in Armenia, groups connected to the pre-revolutionary government and other opponents of the current administration retain significant control over the country’s media. As a result, such groups, now in the opposition, have begun an extensive campaign in the press and on social media networks to spread disinformation, conspiracy theories, and other biased information in an attempt to discredit Pashinyan and his government.

For instance, the opposition has recently been making numerous false claims that the Velvet Revolution was staged or masterminded by Hungarian-American philanthropist George Soros, that Pashinyan’s administration would “sell Karabakh,” and that the post-revolutionary government would “betray national and family values” by supporting Armenia’s minority groups.

Among the numerous topics about which the opposition spreads disinformation, one theme that has persisted in the opposition’s efforts to discredit the post-revolutionary government is discourse on LGBT issues and the ‘threat’ that the LGBT community presents to Armenia’s ‘national values.’ LGBT issues have a particular resonance in Armenian society, which remains deeply patriarchal and conservative, and where homophobia is extremely widespread. Homosexuality is commonly seen in Armenia as not just a moral issue, but even an existential threat to the country’s survival. Such ideas stem, in part, from Armenia’s high levels of religiosity and cultural inflexibility, perceptions that homosexuality is a ‘Western’ or ‘European’ value, and anxiety around depopulation, demographic collapse, and ongoing confrontations with neighboring Azerbaijan and Turkey.

In this way, nationalist and populist groups can manipulate and instrumentalize LGBT issues in order to draw a contrast between a ‘decadent’ or ‘depraved’ West and a ‘traditional’ Armenia. Indeed, by linking the current administration with the LGBT community and alleging its support for LGBT issues, the opposition invokes rhetoric around the ‘defense of the nation’ to delegitimize the post-revolutionary government. As a result, homophobic discourse and anti-LGBT stances have become prioritized and promoted by opposition groups. Here, a recent parliamentary vote on a bill banning same-sex marriage is demonstrative.

On November 12, an opposition lawmaker from the Prosperous Armenia Party brought forward a draft law outlawing same-sex marriage. However, same-sex marriage is already banned in Armenia, as the country’s constitution explicitly defines marriage as a union between “a woman and a man.” Recognizing this fact, parliamentarians from the ruling My Step Alliance correctly argued that the issue of same-sex marriage has already been determined in the existing legal framework and, therefore, voted down the bill. Nonetheless, the opposition has been able to use the vote to claim that the current government is intent on undermining ‘traditional values.’ As one lawmaker stated, the opposition staged the vote simply in order to “create a scandal.”

It is clear that the opposition understands the ways it can instrumentalize Armenia’s ongoing culture wars for political benefit better than Pashinyan, whose many ambiguous positions on controversial issues have opened him up to criticism on both sides of cultural issues. As long as such issues continue to cause debate and divisiveness in Armenian society, the trends detailed above will almost certainly continue unabated.

In picture: People hold a protest march against the Istanbul Convention in the streets of Yerevan, Armenia (Photolur)