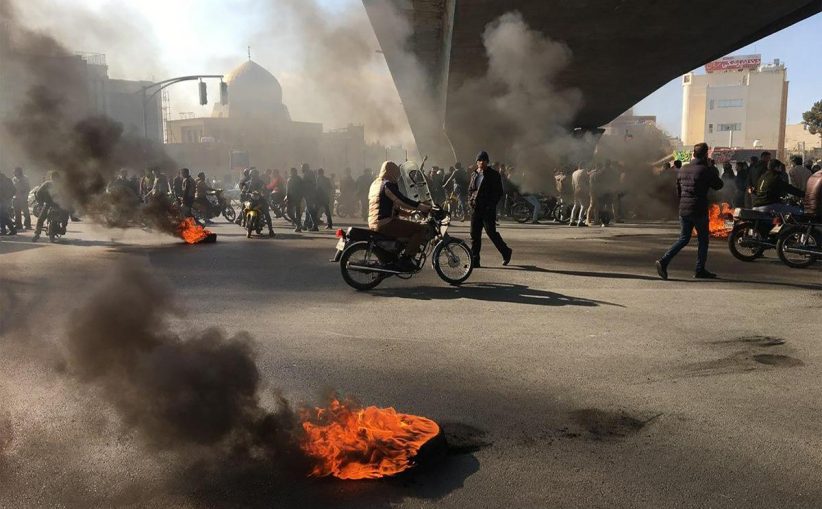 Recent waves of protests in Iran that broke out as a result of the government decision to significantly raise gasoline prices, pose potential problems to all of its neighbors, including Armenia. One of the most critical problems can be the possible influx of refugees into the territory of Armenia and Nagorno Karabakh.

Domestic instability in Iran is a source of concern for all its neighbors, including Armenia. Iran is one of the only two open borders Armenia has to reach the outside world. Any significant weakening of Iranian state institutions may complicate the export and import operations through Iran which definitely will put additional pressure on the Armenian economy.

The bigger source of concern, however, is the possible influx of Iranian refugees into both Armenia and Republic of Artsakh (Nagorno Karabakh Republic) in case of state collapse in Iran. Given the fact that Iranian provinces along the Armenia and Artsakh borders are mainly populated by millions of Azeri speaking people, the possible refugee crisis may become a vital security threat for both Armenia and the Republic of Artsakh.

The fate of the Armenian community in Iran is another source of concern. Despite the decrease in the number of Armenians, they still possess significant capital and assets, therefore mechanisms should be created to save them in case of emergency.

Thus, Armenia should elaborate contingency plans in case of a serious deterioration of the situation in Iran. Meanwhile, Yerevan should continue its efforts to keep a delicate balance between its friendly relations with Iran and partnership with the US.

As for now, Americans are not requiring the total halt of economic relations with Iran. The Iran – Armenia natural gas pipeline and the gas for electricity scheme is not sanctioned. The US does not object to imports from Iran, including cement. The US made significant efforts to stop Iranian Mahan Air’s Tehran – Yerevan direct flights, arguing that Mahan Air was de facto controlled by the Islamic Revolutionary Guard Corps. However, there are no objections from the US side to the direct Yerevan – Tehran flights implemented by Armenia Airways launched in June 2019.

However, American sanctions may create significant obstacles for Armenia to realize its full potential as the only Eurasian Economic Union member state to have a land border with Iran. Given the EAEU – Iran temporary free trade agreement, Armenia may become a production hub for those foreign companies who want to export tariff-free to Iran. Meanwhile, the US secondary sanctions are significant obstacles in this regard. To avoid complications, Armenia should launch negotiations with the US, seeking to receive some sanction waivers for concrete projects which will allow Yerevan to entice foreign companies to invest in Armenia and then export products to Iranian markets.

Thus, the current Iran protest movement does not pose an immediate security threat to Armenia. However, Yerevan should be ready for any eventuality and simultaneously make efforts to get sanction waivers for those foreign companies, who may be ready to produce goods in Armenia and then export them to Iran.

The protests in Iran that broke out after the raising of gasoline prices quickly turned violent – clashes with police, attacks on gas stations, banks and even some governmental buildings took place. Due to the restriction of internet and mobile service in Iran, no reliable information is available regarding casualties. However, according to different sources, we assume that at least 20 people have been killed and more than 1000 have been arrested.

Given the mostly decentralized nature of these protests, they will find it difficult to bring about regime change or state collapse. The capabilities of Law enforcement forces of Iran have been improved since the Green movement of 2009 and in case of necessity; the Islamic Revolutionary Guard Corps and Basij forces can be mobilized.

However, recent protests are further evidence of a deteriorating socio-economic situation in Iran. Since large scale demonstrations between December 2017 – January 2018, almost every month, small scale protests have occurred in several towns. People were complaining about low wages, shortage of water, and deteriorating environmental problems. The US decision to withdraw from the Iran nuclear deal and re-impose sanctions has played a significant role in putting additional pressure on Iran’s economy. The Iranian currency plummeted and prices for imported products went up. Meanwhile, the recent demonstrations coincided with the protest movements currently underway in Lebanon and Iraq, two states where Iran yields significant influence. The Lebanese government has already resigned and political instability continues in Iraq. Thus, besides restoring domestic stability, Iranian authorities have to make efforts to retain their influence in neighboring states.

Iranian protests have also impacted the domestic political scene. Iranian hardliners use the protests to add pressure on President Rouhani, accusing him of signing a useless nuclear deal. Given the upcoming Presidential elections in 2021, when incumbent President has to leave office due to term limits, all Iranian political forces are keen to use the current situation to further their own political agenda.

Most probably, Iran will face domestic instability and a surge in protests in the coming years. Meanwhile, it’s too early to ascertain the possibility of regime change. Since 1979, the Islamic Republic has shown endurance and its ability to fight back.

In photo: Iranian protesters rally against an increase in petrol prices, in the central city of Isfahan. AFP