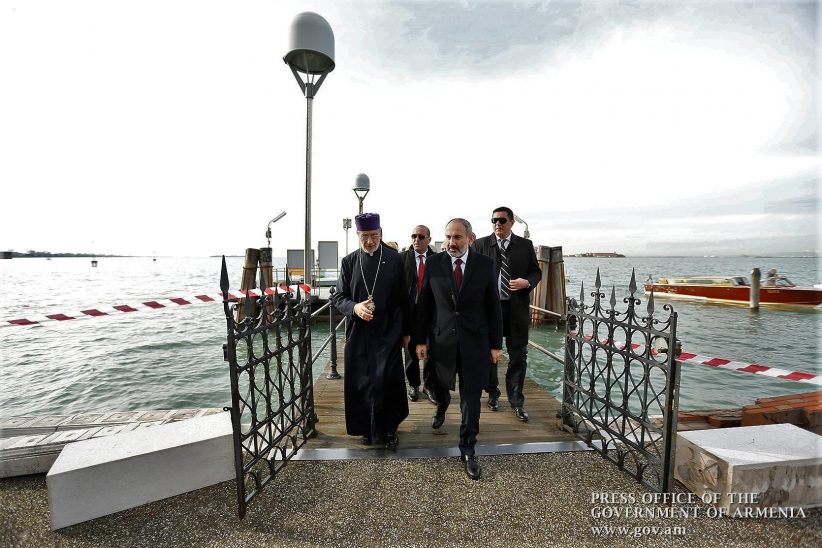 Armenia’s Prime Minister Nikol Pashinyan began his 3-day official visit to Italy on Wednesday. Pashinyan started off in Venice and then moved onto Milan and will be in Rome on Friday.

The visit was covered by various Italian media outlets. Italian news was flooded with news on the football match on Monday between Armenia and Italy wherein Italy won 9-1, however CivilNet has gathered some of the leading pieces which covered the visit of the Armenian prime minister.

Armenian Prime Minister Nikol Pashinyan visited the Armenian Monastery on the island of San Lazzaro degli Armeni in Venice today to see the damage caused by high waters last week. Accompanying him was the municipal councillor for social cohesion, Simone Venturini, the prefect, Vittorio Zappalorto and Archbishop Lévon Boghos Zékiyan. Venturini said he was “deeply saddened” by the damage inflicted on the island “but relieved to learn that the real treasures that are kept in the library and in the museum are well preserved and have not been damaged.”

Councillor Venturini said: “the Armenian people and the Mekhitarist congregation are friends, brothers, Venetians. This visit therefore also takes on a symbolic meaning, because it renews the bond between Venice and Armenia and the commitment to better value this extraordinary island and the treasures it holds. We are deeply saddened by the damage suffered by the island, but at least relieved to learn that the real treasures that are kept in the library and in the museum are well preserved and have not been damaged.”

Eurosia Zuccolo Fanelli, director of the Archival and Bibliographical Superintendency of the Veneto and Trentino-Alto Adige regions, who was also present at the inspection, said that they will proceed with a new drying operation, as well as freezing and freeze-drying what went underwater in the libraries that contain documents from 700AD to today. He also announced that the Mibact is considering constructing a new library on the island that could contain all documentations from the Mekhitarist archive.

The municipal councillor for social cohesion, Simone Venturini, today visited the Mechitarist Monastery on the island of San Lazzaro degli Armeni, together with the prefect of Venice, Vittorio Zappalorto, to welcome, together with Archbishop Lévon Boghos Zékiyan, the Prime Minister of Armenia, Nikol Pashinyan, who arrived in Venice with a delegation to see the damage caused by high waters of last week.

Armenian prime minister, Nikol Pashinyan, met today with the vice president of the Lombardy region, Fabrizio Sala, as part of his official visit to Italy. “Lombardy is doing its utmost to expand relations with other countries and start new partnerships: I hope that today’s meeting will contribute to further strengthening an already very important relationship,” said Sala. “Relations and cooperation between Armenia and Italy are entering a new phase, especially with regards to the economy: the potential for cooperation with the Lombardy region is very important,” said Pashinyan.