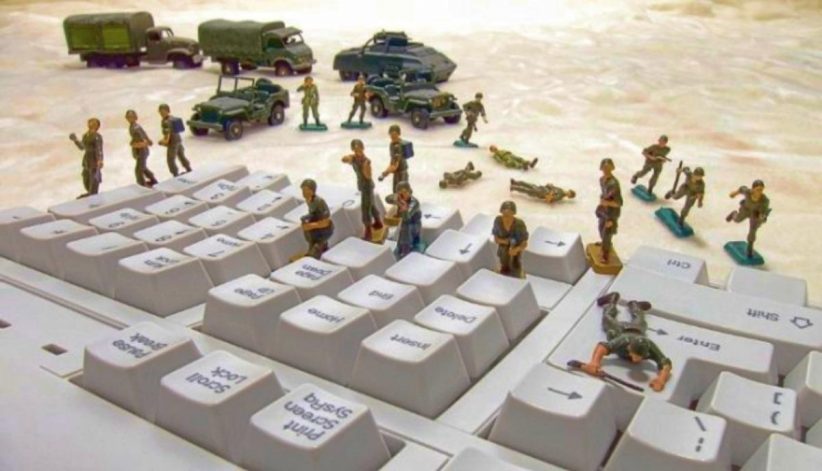 Though the term hybrid warfare was first coined in 2005, it rose to prominence in 2014 to describe the conflicts roiling Ukraine and Syria, and determining a precise definition for the term remains a matter of debate. That said, it is generally agreed that hybrid warfare describes a military strategy that employs conventional military capabilities alongside nonmilitary methods, such as terrorism, economic pressure, and cyberattacks, in “coordinated, coherent, and often simulanteous ways.”

The term has been particularly used in connection with Russia’s military involvement in recent conflicts in Georgia, Ukraine, and Syria.

Although Russia’s involvement in Armenia differs significantly from its military interventions in fellow post-Soviet states such as Georgia and Ukraine, employing a hybrid warfare framework to better understand Russia’s influence in Armenia could, nevertheless, shed new light on Armenia-Russia relations.

In short, though Russia is certainly not conducting military operations against Armenia, many of the hybrid warfare mechanisms that could provide Russia with leverage over Armenia are already in place.

Of foremost concern here is Armenia’s military and economic overdependence on Russia, which has only deepened since Armenia’s accession to the Russia-led Eurasian Economic Union in 2015. As the European Council on Foreign Relations has rightly claimed, the Armenia-Russia relationship today is centered on “guns, gas, and goods.”

First, Armenia receives weapons and other military equipment from Russia at discounted prices, as well as security in the form of the roughly 5,000 Russian troops stationed at the Russian 102nd Military Base in Gyumri, Armenia’s second-largest city. Second, Russia supplies Armenia with natural gas at below-market levels, even after a recent price increase, giving Russia substantial influence over an economic sector of critical strategic importance. Third, Armenia and Russia have a robust and vibrant economic relationship: trade with Russia accounts for roughly 25 percent of Armenia’s total trade, and remittances from Armenian migrant workers in Russia comprise roughly ten percent of Armenia’s GDP.

In all of these cases of Armenian military and economic overdependence on Russia lie the seeds of future leverage and pressure by Russia on Armenia, should relations sharply deteriorate.

Likewise, Russia’s moves in recent years toward increased cooperation and rapprochement with Azerbaijan, which does not have diplomatic relations with and technically remains at war with Armenia, serve as examples of what Gevorgyan terms the “diplomatic tools” of hybrid warfare in her interview with CivilNet.

For instance, following the April 2016 Nagorno-Karabakh clashes, it came to light that Russia has supplied Azerbaijan with billions of dollars’ worth of arms since 2011. In this case, Russia’s moves to improve relations with a country that has hostile relations with Armenia provide a stark reminder that Russia could, should it choose to, further isolate Armenia diplomatically and rebalance the diplomatic scales away from Armenia’s favor on the international stage.

Finally, according to Gevorgyan, the spread of Russian disinformation in Armenia in recent years parallels Russia’s disinformation efforts in hybrid warfare environments in countries like Georgia and Ukraine. In particular, the leading role played by Russian television channels in Armenia’s media landscape has allowed for the spread of divisive rhetoric on topics deemed controversial in Armenia, such as the philanthropic activities of George Soros, the provision of rights for sexual minorities, and Armenia’s stalled ratification of the Istanbul Convention.

According to Gevorgyan, such information warfare tactics threaten to sow division and distrust in Armenian society and contribute to ongoing political polarization in the country.