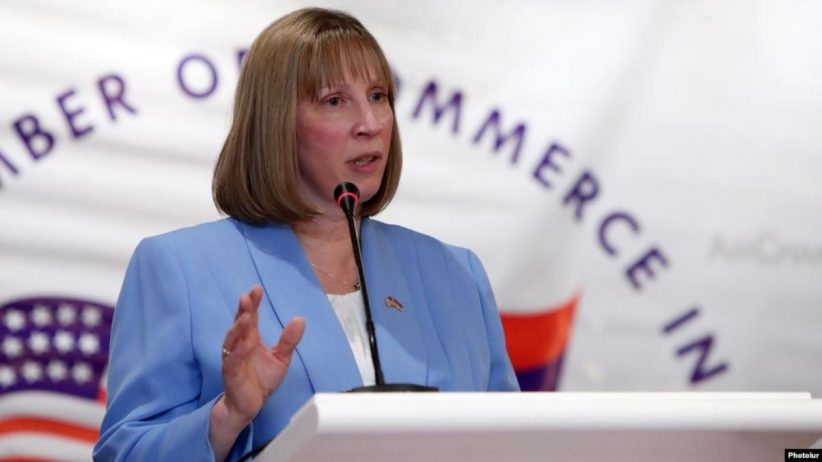 In an interview with Civilnet’s Arshaluys Mghdesyan, US Ambassador to Armenia, Lynne Tracy answered questions, giving her Government’s stance on Armenia – Iran Relations, primarily in terms of energy cooperation.

This comes as the Trump Administration has intensified sanctions on Tehran, Armenia looks to continue its economic partnership with Iran without antagonising the US.

Ambassador Tracy first-off dispelled concerns that the US is at odds with Armenia over its energy and gas deals with Iran.

US Ambassador stated that she recognised Armenia’s border with Iran is one of only two open borders as well as the deep economic ties the two countries share.

She further mentioned that the United States policy is not concerned with legitimate trading relations, but rather with Iran’s support for terrorist entities.

According to the Ambassador, Iran’s trading relations with Armenia do not constitute a bilateral relationship which is helping entities with ties to terrorist groups, but rather a trading partnership which the US has no qualms with.

In response to the case of two Armenian companies, which claimed they were only cooperating with Iran in the sphere of trade, but were included in the US Department of the Treasury’s Sanction list, Ambassador Tracy stated she didn’t want to comment on the particularities of these two specific companies.

However, the Ambassador did remark that the US Department of the Treasury does not make these sorts of designations lightly and does carry out a diligent and rigorous process to ascertain whether any entities are in violation of US sanctions.

In whole, the Ambassador attempted to ease Armenian concerns, and made it clear that the US policy towards Iran, especially with regards to sanctions, is targeting a very specific section of the Iranian economy, and that trade relations between Armenia and Iran are a completely separate and unrelated sphere.