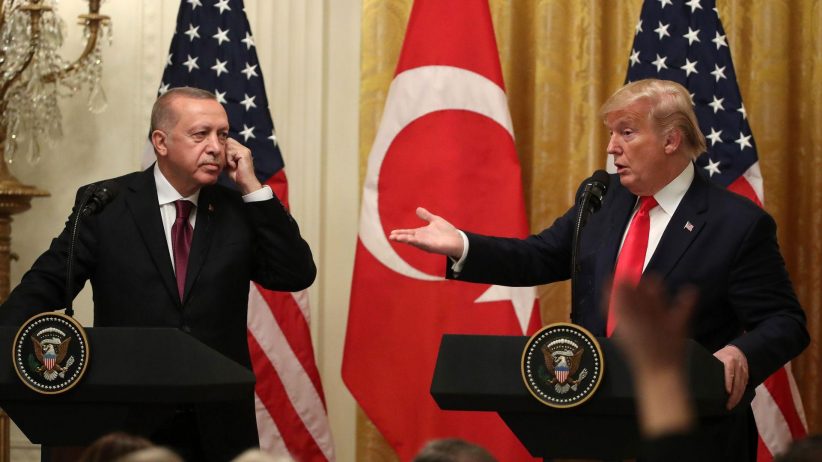 By Benyamin Poghosyan, Chairman and Founder, Center for Political and Economic Strategic Studies

On November 13 US President Donald Trump hosted Turkish President Recep Erdogan in the White House. Given the growing tensions in the US – Turkish relations and the existence of problematic issues, such as Turkey’s purchase of Russian S-400 air defense systems, Russia – Turkey – Iran cooperation in Syria, disagreements over security arrangements in northeastern Syria, the meeting was highly anticipated.

Both sides have reached the meeting with clear positions. Turkey was unhappy about the US decision to stop Turkey’s participation in F-35 military jet program. The rejection of Turkey’s numerous requests to extradite cleric Fetullah Gulen, whom Turkish authorities are blaming for organizing the 2016 military coup attempt, has put additional pressure on bilateral relations. The almost unanimously adopted US House of Representatives’ resolution recognizing Armenian Genocide, and the possible adoption of similar resolution by Senate as well as circulation of several bills in the Congress aimed at sanctioning Turkey were among the Turkish concerns.

As for the US, Washington was against Turkey’s decision to buy Russian modern weaponry and was concerned about growing Russia – Turkey cooperation in Syria. The Congress was critical on Turkish incursion into Northeastern Syria as well as on Turkey’s democratic records given the large scale arrests of journalists and opposition figures.

The bilateral meeting and the press conference that followed have shown that both sides were not able to solve any major problem. President Erdogan reiterated his suggestion that Turkey may also buy American Patriot air defense systems but there was no hint that Ankara was ready to cancel its deal with Russia. Meanwhile, the main concern of the US and NATO was not the possible sale of Patriot systems but the dangers posed to NATO and US military secrets by the S-400 deployed in the NATO member state.

Nothing was decided on the fate of Northeastern Syria. Both Presidents praised the October 17 agreement reached in Ankara during Vice President Pence visit, but obviously this agreement can do little to finally solve the conflict there. Turkey continues to view Kurdish forces there as terrorists and offshoots of PKK, while the US, despite its decision to withdraw American soldiers from the borders areas, still perceives Kurds as partners and takes actions to provide Syrian oil fields revenues to them.

There were discussions on trade issues and President Trump reiterated his commitment to reach the 100 billion USD trade turnover goals with Turkey. However, this issue most probably will need additional deliberations.

The only concrete result of the November 13 meeting was the US Senator Sen. Lindsey Graham’s decision to block a resolution that would have formally recognized the Armenian Genocide in the Ottoman Empire. Graham, who alongside with other Senators had a meeting with President Erdogan, objected to passing the resolution in the Senate, saying senators shouldn’t sugarcoat history or try to rewrite it. However, this move does not end the prospects for the adoption of the resolution in the future, thus keeping it as an additional leverage for the US to put pressure on Turkey.

Meanwhile, it should be noted that strategically the US and Turkey are drifting away. The key bond between the two states was the secular Turkish military leadership, who was mainly trained and educated in the US and who had enormous powers within Turkey. However, Erdogan succeeded in its efforts to gradually weaken the military, which now is under his full control. The US also has no common enemy now. The Soviet threat was a major factor keeping US and Turkey together. Now Turkey is engaged in a bitter rivalry with Saudi Arabia, a key US ally in the Middle East, for the leadership in the Sunni world.

Simultaneously, Americans are supporting Egypt’s post-2013 leaders, who are perceived in Turkey as illegal dictators. Two sides have different views on Russia too. Washington perceives Moscow as a revisionist state, who, alongside with China, seeks to destroy the Post Cold War international order. For Ankara, Moscow is a partner, who may support Turkey to boost its industry by providing energy resources, transform it into a nuclear club member state, and contribute to the realization of Turkey’s dreams of becoming regional natural gas hub. Of course, this does not mean that Turkey and Russia are allies, as they also have divergent strategic visions, but Turkey is satisfied from its current level of partner relations with Moscow.

Iran is another point of disagreement. Turkey understands that strategically Iran will always be its rival in its quest for regional hegemony in the Middle East. However, both Turkey and Iran have also coinciding interests like prevention of establishment of de facto independent Kurdish state in Northern Syria. Thus, Turkey has no reason to fully embrace the “maximum economic pressure” campaign waged against Iran by the US.

Summarizing, we may argue that the US – Turkish relations have little possibility for significant improvement. Meanwhile, given the strategic importance of Turkey for any US policy in the Middle East and Black Sea region, there will be no final divorce. The ups and downs will continue and issues, such as passage of Armenian Genocide recognition resolution in the Senate will be used by the US as an additional leverage to contain and if necessary, to punish Turkey.