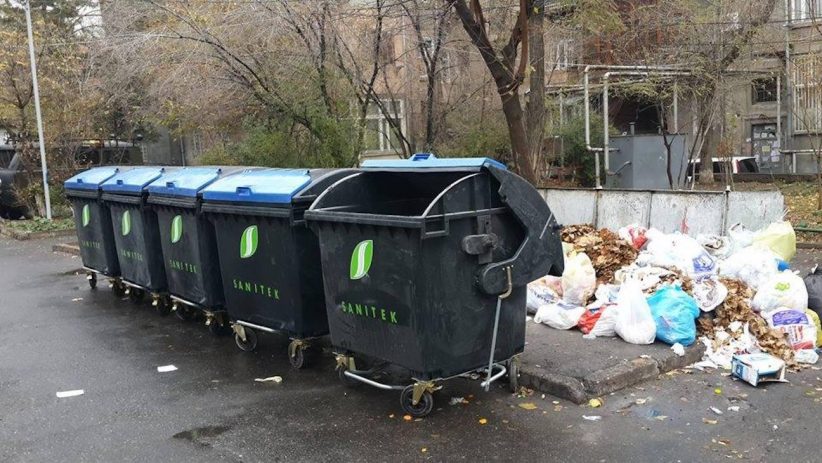 The problem of garbage disposal in Armenia’s capital of Yerevan is mounting.

Previously, the city center used to be cleaner than the other districts of Yerevan. The heart of the city is popular among locals and tourists, thus keeping the area clean is a imperative for the municipality.

However, in the past few months, Armenia’s citizens have been complaining about the piles of garbages in every corner of the city.

According to 2017 data from the National Statistics Service of the Republic of Armenia, one out of five people in Armenia is not satisfied with the trash collection service.

Hakob Karapetyan, the Yerevan Municipality Press Secretary, wrote on his facebook page that the only garbage disposal operator in the country, which was unsatisfactory to begin with, is even less satisfying now.

The company that Karapetyan is referring to is Sanitek Armenia, a waste management branch company headquartered in Lebanon. Sanitek won an international competition initiated by then-mayor of Yerevan, Taron Margaryan, to address the issue of poor garbage collection in the capital.

“The number of dumpsters is not enough. The dumpsters are almost out of order everyday, almost not replaced, and the number of trash cans is not increasing, the ones existing are not being washed and cleaned,” Karapetyan wrote.

Back in September, the same issue was raised by citizens and the municipality. The company was even fined roughly $27,000 for multiple cases of improper implementation of services as outlined by contract.

Compliance statements were sent to Sanitek and the company was given a timeframe to eliminate the shortcomings.

Sanitek, in turn, challenged the issued notices, stating that the failures are due to circumstances related to the condition of landfills.

By landfill, the Beirut-based company meant garbage dumps. Armenia has over 300 unregulated garbage dumps. Unregulated, because there is no proper waste management policies complied with strict environment standards.

According to Irina Ghaplanyan, First Deputy of Nature Protection, Armenia lacks a single sanitary landfill to meet the needs of Armenia’s rural or urban regions.

“Landfill sites are sources of bacterial pollution of the environment and the generation of different epidemic diseases. Animals living in the landfill sites such as dogs, birds and rodents are carriers of such serious diseases. All this can lead to very serious diseases and escalation of epidemic situation which is hazardous for the population,” reminds Ecolur.

The largest landfill is located in Nubarashen, in the outskirt of Yerevan. More than 1000 tons of waste is transported to the Nubarashen landfill everyday. The waste is not regulated and meets no international standards of sanitation. It is buried under a layer of 25-30 cm of soil. This means that the toxins from the rotting waste escape the site in the form of methane gas and leachates, which are liquids that have passed through the landfill and picked up toxic matter along the way, posing a severe health risk to the nearby communities of Erebuni and Nubarashen.

According to the Environmental and Social Impact Assessment study, the current dump site’s uncontrolled leachates have formed a “river” nearby: “Leachate would still drain out from the extant slope which would be accumulated in the valley between extant and new landfill resulting in generating a river/lake of leachate with the same negative environmental effects as it can be observed at the current leachate river on site now, ” reads the study.

To tackle the issue of the unregulated landfills, the Armenian government set the “2017-2036 Solid Waste Management System Development Strategy of the Republic of Armenia,” which was ratified in December 2016.

The strategy aims to build six or nine other large sanitary landfills across Armenia where each landfill will service a designated region. The government hopes that, this way, the unregulated landfills will decrease and issues related to pollution and health will be solved in the long-term.

Among People Under 30, Unemployment Rate Still High in Armenia