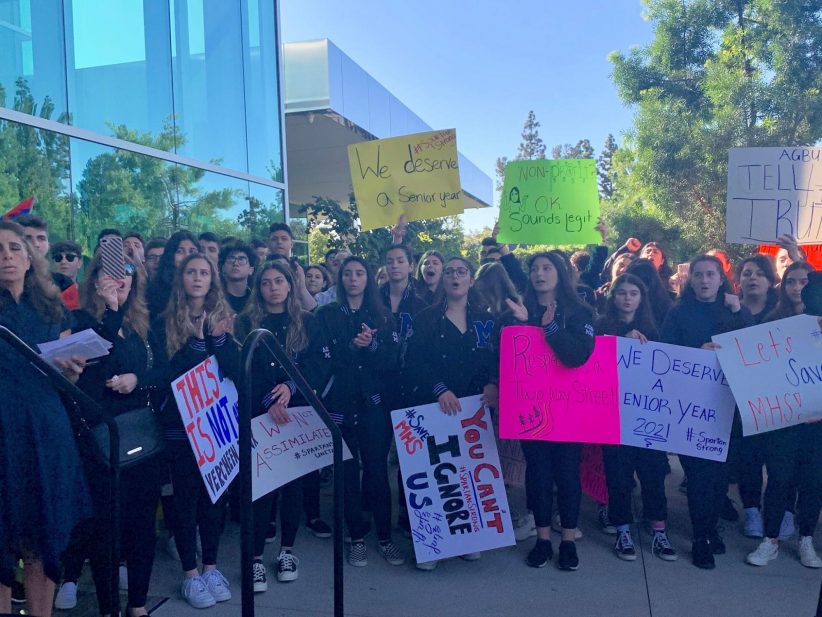 The protest came after students and parents of the Armenian General Benevolent Union’s (AGBU) Vatche & Tamar Manoukian High School (MHS) received an abrupt email on Friday, Oct. 25, notifying them that the school would permanently close at the end of the academic year.

The decision was made by the AGBU Central Board, the Manoukian Foundation and the MHS Board of Trustees, according to the email. The collective blamed the closure on declining enrollment and a growing deficit.

“Since its inception, regardless of enrollment numbers, the school has been heavily subsidized by AGBU and the Manoukian Foundation,” the email said. “Those subsidies have grown significantly every year, nearing almost $2 million this past year, alone.”

The Pasadena school will be combined with the AGBU Manoogian-Demirdjian (MDS) campus in Canoga Park – 31 miles away. The board has offered to finance a bus to take students to and from Pasadena to Canoga Park.

“We are offering an option in combining these schools into one excellent campus,” Arda Haratunian, a member of the AGBU Central Board, told Civilnet. “If an Armenian education at an excellent Armenian institution is a priority, then the distance shouldn’t be an issue.”

The board found that there is a “lower community demand, overall, for full-time private Armenian education,” according to the email they sent to students and parents.

Founded in 2006, MHS is the youngest of 14 Armenian day schools in Southern California, which have a total of over 4,300 enrolled students.

Teachers and staff were notified of the decision at a meeting that took place at the same time the email announcement was sent out.

The board plans to hire faculty and staff from MHS at MDS to support the transition, Haratunian said.

“While I was not involved in the decision to combine our two AGBU schools, I respect my colleagues and the education provided at MDS, and am committed to making sure each student’s transition is handled the right way,” said Gohar Stambolyan, who was named principal of MHS in August.

Students did not take the news lightly. Along with parents, they mobilized over the weekend and held a protest Monday morning. The students staged a walk-out during their homeroom period and gathered in the school quad, where parents, alumni, teachers and community leaders shared their frustration and their refusal to accept the shocking news.

“We, as students, have a lot of things to worry about like our future and our grades. We shouldn’t have to worry about what school we’re going to transfer to,” said Vana Yepremian, a sophomore. “All of the students at MHS love our school but we feel disrespected by the AGBU board.”

During the rally, Maro Najarian Yacoubian, co-chair of the school’s parent support group, said that they were not given a chance to help or find a solution.

“Another Armenian school will shut down and another Armenian community will be broken,” she said. “The modern day ethinic cleansing by assimilation is being perpetrated on us, willingly, by the AGBU Central Board and the Manoukian Foundation.”

During the next few days, students held silent protests with signs that read ‘We deserve a senior year’ and ‘We won’t back down without a fight,’ while chanting, “Save our school.”

The student-driven movement has spread to social media, with students and alumni sharing messages about how they have benefitted from attending the school. Students have also started an online petition, gathering signatures in an effort to save MHS. As of Friday, the petition had over 7,000 signatures.

“We teach our students to be civically engaged. I’m proud of how they have conducted themselves in recent days but hope they continue to recognize that their responsibilities as students have not changed either,” the principal said.

The students said they plan to continue protesting until the decision is reversed.

“We are motivated, we are articulate and we will achieve our goals no matter who stands in our way,” said Joseph Atme, MHS student body president. “It is about providing a true benefit to our Armenian community by keeping this school open.”

Atme is a senior, meaning the closure does not affect him personally but that hasn’t stopped him and the other seniors from organizing and rallying for the younger students.

“This is a loss not only for the entire Armenian community within the region, but also for the continued preservation of our Armenian heritage in the midst of the largest Armenian population in the diaspora,” said Dr. Talin Kargodorian, principal of Chamlian Armenian School in Glendale.

Kargodorian, who was principal of MHS from 2007 to 2014, said that the diaspora as a whole will feel the impact of this loss.

“Our schools, more than ever, play an integral role in nurturing community, exalting culture and offering a stronghold where Armenian American students are anchored,” she said. “I for one feel that we should be establishing more of these institutions of learning and cultural hubs, where students can come together to experience cultural identity and a high caliber education. The challenges of assimilation and losing our sense of identity only grow at an alarming rate when we turn our backs on the most valuable assets to our being: our youth.”

The current AGBU MHS campus is also home to the offices of the AGBU Pasadena Glendale chapter and the AGBU Western District Committee. Leaders of both institutions say they were not involved nor aware of the decision.

“Obviously it’s an unfortunate scenario and I hope they are able to reach an accommodation if there is one to salvage the school,” said Krikor Demirjian, chair of the AGBU Pasadena Glendale chapter.

Three days after the email announcement was made, the Western District sent out an email saying that they were advised of the decision immediately prior to the community at large and had no involvement, pursuant to the governing framework of AGBU.

“We are here, however, to ensure that all concerns are heard and addressed by the appropriate bodies to find constructive solutions,” said Talin Yacoubian, chair of the Western District.

Parents are concerned that they were never told that there was such a deficit or even a concern with enrollment, said Aline Yepremian, a parent of three children, two of whom have graduated from MHS and one who is a current student.

“In fact, when we tried to offer assistance, the school, through its school board, has repeatedly said that there is no reason or need to fundraise or increase enrollment,” Yepremian said. “For the AGBU Central Board to take the position that a sensationalized deficit and low enrollment claim is the cause to close our school is absurd. There is something unsettling about their claim.”

There has to be fiscal responsibility for any nonprofit, Haratunian said. The subsidies have been balanced between the school and the Manoukian Foundation and the school has never made a profit, she added.

“Charities are not businesses,” Dr. Hagop Gulludjian, professor of Armenian Studies at UCLA, told Civilnet. “They exist because the schools or other projects they sponsor necessarily have deficits.”

The high school will be replaced with a state-of-the-art community center that will not only serve as a meeting space for cultural programs, but will also house technology-based educational opportunities in robotics, engineering and computer-based learning, according to Haratunian.

“One reaches potentially 150 kids and the other could reach 1,000 kids, adults, teens, seniors and young professionals,” she said. “Both would require an investment but when you see the deficit going up and the demand not going up, it becomes in some ways a practical decision.”

AGBU, which has 12 other day schools throughout the world, serves nearly 5,000 students globally.

In the case of AGBU, there appears to be a trend, Gulludjian said, which, in context, makes the decision to close MHS even more pronounced.

In October of 2018, the AGBU Toronto Chapter issued a statement, announcing that it could no longer afford to pay its center’s operational costs. The center was eventually purchased by the Armenian Diocese of Canada after much commotion in the community.

In 2005, AGBU cut funding for the Melkonian Educational Institute in Cyprus, resulting in controversy among its alumni and the Armenian community. As a result, the 80-year-old institution closed.

In 1991, the AGBU Alex and Marie Manoogian School in Detroit closed its high school due to declining enrollment. However, in 1995, with parents’ intervention, it was reopened and converted into a charter school.

“All of the above indicate not a preoccupation with deficits, but a policy intended to exclude Armenian schooling, and especially language, from AGBU’s mission,” Gulludjian said.

The AGBU Central Board will meet with select MHS parents and students next week to discuss the school’s closure.

Sareen Habeshian is a digital news producer at KTLA, media content and operations manager at the USC Institute of Armenian Studies, and a reporter and editor for CivilNet.am. Sareen holds a master’s degree in journalism from USC and bachelor’s degrees in media studies and Armenian language and literature from UC Berkeley. She is a graduate of AGBU Vatche and Tamar Manoukian High School.