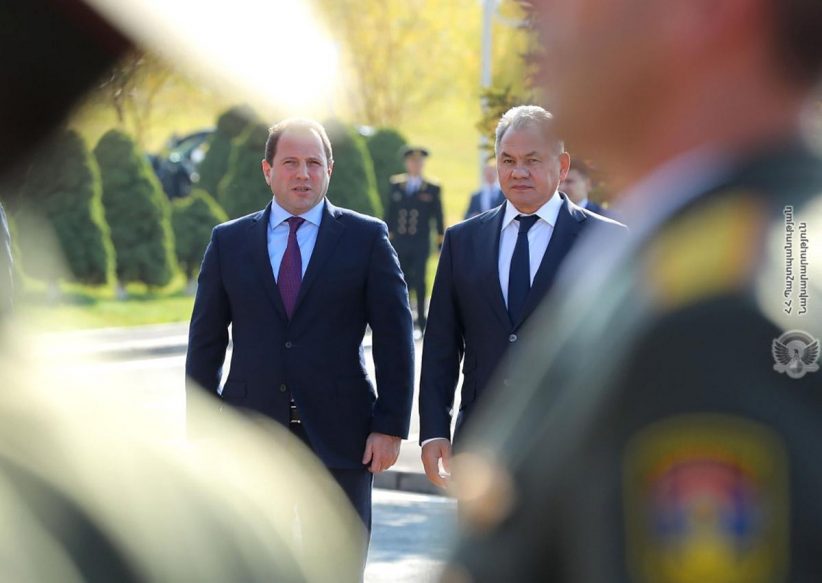 Russian Defense Minister Sergey Shoygu visited Armenia on October 29th, with the state of Russian-Armenian relations again in the spotlight.

Sergey Shoygu’s visit resulted in the signing of bilateral agreements between the defense ministries of both countries.

The visit included high-level talks with Armenian Defense Minister Davit Tonoyan, official talks with Prime Minister Nikol Pashinyan and a visit to the 102nd Russian Military Base in Gyumri. Sergey Shoygu also announced that the military capability of the Gyumri base will be doubled once new and modernized military equipment is fitted in the near future.

According to Russian Kommersant daily, Russia is also working on gaining access for Russian military and health officials to Armenia’s US-built biolabs. However, CivilNet’s sources in Armenia’s Government have specified that the negotiated memorandum would not provide any access to a third party.

Armenia has key defense arrangements with Russia which includes Russian troops patrolling the Turkish-Armenian border as well as having a military base in Gyumri. Armenia sees these arrangements, as well as its adherence to the Russian-led CSTO as a key component for its security.

Armenian post-revolutionary leaders have sought to portray Armenia’s 2018 Revolution as a move against internal factors in Armenia and not against Armenia’s foreign policy set up, aware of Russia’s uneasiness towards revolutions in former-Soviet countries such as Georgia and Ukraine and their aftermath which had clear foreign policy and geo-political contexts.

Hence since the 2018 Armenian Revolution, against some expectations, both the Russian and Armenian Governments have been portraying two states committed to the status-quo, especially in military and economic cooperation, which includes Armenia’s adherence to another Russian-led bloc, Eurasian Economic Union.

Armenian-Russian relations deteriorated after the indictment of the CSTO Secretary General Yuri Khatchaturov, coupled shortly thereafter with the indictment and incarceration of former President and close Russian ally, Robert Kocharyan.

In light of these issues, Pashinyan’s Government seems to have managed to appease Russia in part by sending a humanitarian mission to Syria to serve under the auspices of the Russian military.

However, as a whole, in light of the apparent uncertainty, Pashinyan’s Government remains committed to military and political arrangements with Moscow.

Pashinyan himself in an interview with Kommersant daily stated that “Armenia doesn’t perceive the situation in a way that we must make a choice between Europe and Russia”, and that “Russia is an integral part of European civilization.”

With this, for the time being, Armenia’s Government has shown its keenness to not antagonise the Kremlin or break away from the Eurasian Economic Union. Russia too seems to have accepted that the post-revolutionary Armenian Government is not the offspring of a “Color Revolution” like in Georgia or Ukraine.

Unlike Georgia and Ukraine, Armenia has not distanced itself from Moscow in any meaningful way since the 2018 Revolution. Russia also seems to recognise the undesirability of a deterioration of relations. Thus, the Armenian Government has been generally successful in assuring spectators that it has no policy against having Moscow as a close ally and security guarantor, and Russia too accommodating the new reality in Armenia and dispensing speculation of a murky future.