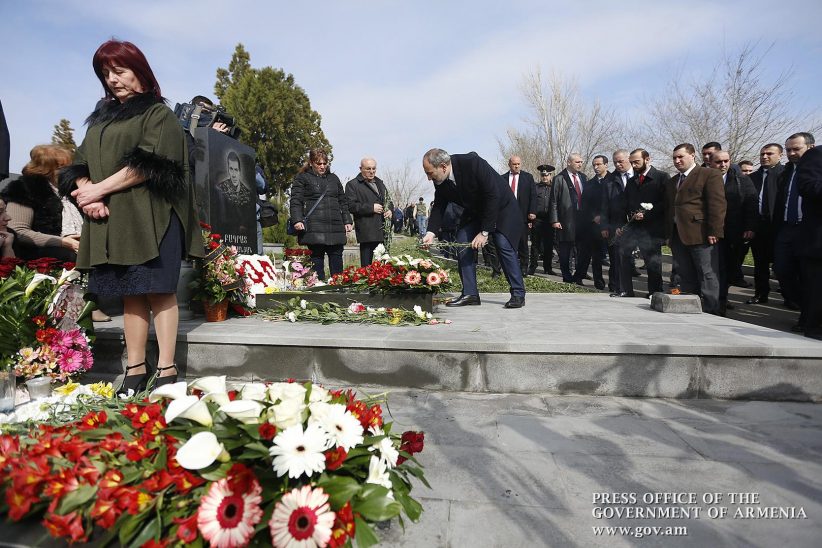 Armenian Prime Minister Nikol Pashinyan visited “Yerablur”, a military cemetery located on a hilltop outside of Yerevan, to pay tribute to soldiers who died during the Four-Day War in April of 2016.

He was accompanied by National Assembly Speaker Ararat Mirzoyan, members of parliament, and high ranking officials of the military.

On the morning of April 2, 2016 alarming news spread from the Nagorno-Karabakh frontline. At 8:18 am, the Nagorno Karabakh Defense Army reported violent clashes across the entire line of contact with Azerbaijan.

The clashes took place between the Artsakh Defense Army, backed by the Armenian Armed Forces, and the Azerbaijani Armed forces. The war lasted for four days. A ceasefire was declared on April 5, 2016.

Watch: War and Ceasefire – The long day of April 5

Pashinyan laid flowers at the graves of soldiers who died during the April war.

In a briefing with reporters, Pashinyan answered a question regarding the conclusions of the April War.

“I have said in the past, and today this issue is on my agenda and on the government’s agenda, that we must deeply and seriously understand what has happened and make conclusions,” Pashinyan said.

The Four-Day War led to losses on both sides. According to officials, 90 Armenian and 31 Azerbaijani soldiers were killed during the clashes, and several pieces of military equipment on both sides were destroyed.

Pashinyan and Aliyev Met in Vienna