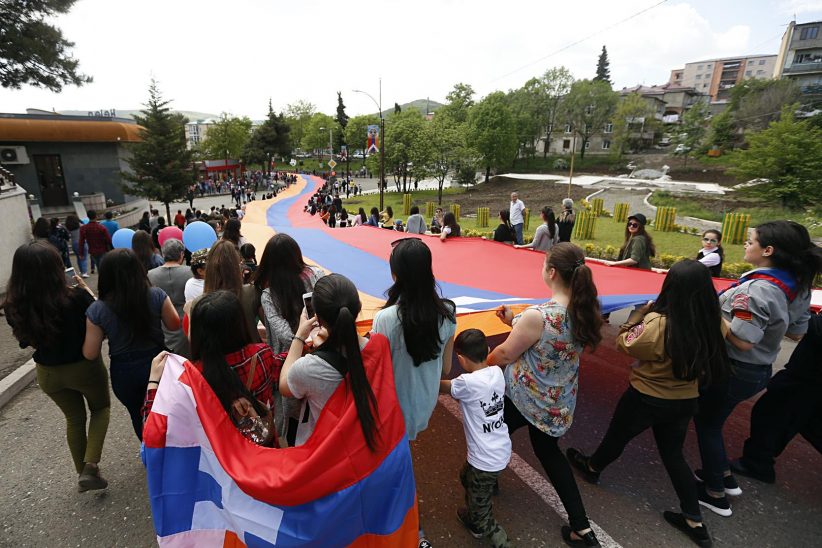 The article was originally published on Washingtonpost.com

After decades of ethnic conflict, the leaders of Armenia and Azerbaijan are preparing to meet to try to resolve their long-term clash over the disputed enclave of Nagorno-Karabakh. Observers have many reasons to be skeptical that yet another one-off meeting will lead to a thaw at long last.

However, something significant has changed since the last such push. A year ago, Armenian protesters brought down a prime minister, leading to free elections last December. Some evidence suggests that democratic societies are more likely to seek peace with their neighbors — and are most likely to achieve it if civil society groups are allowed to reach out and form contacts across borders before the formal negotiations.

Here’s what you need to know about what has happened, and what comes next.

1. A brief history of the Nagorno-Karabakh conflict

Between Armenia and Azerbaijan lies a contested territory controlled by an unrecognized state called the Nagorno-Karabakh Republic (NKR), which is supported, but not recognized, by the Armenian government — and is claimed by Azerbaijan.

In 1921, the Soviet Union joined this Armenian-majority highland enclave with Soviet-controlled Azerbaijan, separating the Armenians as part of Stalin’s divide-and-conquer strategies. In the late 1980s, as Moscow loosened its controls over the Soviet empire under perestroika, ethnic Armenians in Nagorno-Karabakh began campaigning to rejoin Armenia, agitating for democracy, human rights and self-rule — one of the early cracks that brought down the Soviet Union.

When the Soviet Union collapsed, the people of Nagorno-Karabakh formally voted to secede from Azerbaijan — prompting armed conflict between Armenia and the Armenian-majority population on one hand and Azerbaijan on the other. In 1994, after 30,000 people on both sides had died and more than 1 million refugees fled the violence, the two countries signed a shaky cease-fire agreement. Observers consider the standoff to be neither war nor peace, and it simmers with low but persistent levels of violence at the border.

2. The democratic wave in Armenia

Last April, Armenia’s parliamentary opposition leader Nikol Pashinyan led a mass nonviolent civil disobedience campaign that forced the prime minister to resign. For decades, Armenia had been “a soft authoritarian state in which the ruling elite … closely controlled political and economic opportunities,” as political scientists Mariam Matevosyan and Graeme Robertson explained here at TMC a year ago. By December, the protesters had forced free elections that put Pashinyan and his pro-democracy party in power. As I’ll explain below, that gave observers some hope that the Nagorno-Karabakh conflict could be resolved.

In recent months, the OSCE Minsk Group, co-chaired by the United States, Russia and France, has mediated diplomatic efforts between the two sides. Armenia and Azerbaijan had been accusing each other of frequently violating the cease-fire with shootings, mortar attacks and use of other heavy weaponry that kills and wounds soldiers and civilians alike. Such attacks have ceased since Armenia’s democratic transition last year.

The global track record of this type of single-shot peace agreement sought by the OSCE Minsk Group has been mixed, as has the efficacy of external peace negotiators. Russia, one of the mediating parties, has continued to sell weapons to both Armenia and Azerbaijan. Azerbaijan has continued to threaten war and economic isolation to try to force negotiating concessions. And Armenia has continued to insist that it will not withdraw from the seven disputed districts it controls around Nagorno-Karabakh.

Past diplomatic rounds were followed by only temporary thaws. Many analysts and peace advocates remain skeptical about this most recent diplomatic opening, too.

3. Here’s what may now be different

Armenia’s democratic breakthrough may have shifted leaders’ incentives on both sides. Now two countries in the region, Armenia and Georgia, its neighbor to the north, embrace democracy.

Recent studies suggest that when a region has more democracies, the probability of conflict and aggression tends to go down. Democratic societies favor peaceful interactions with their neighbors. They tend to advance cooperation and compromise in their regions. And democratic societies are more likely to support one another’s shared goals of human rights and economic interests in bigger markets. That weakens support for military “solutions” to conflicts.

But that’s not enough by itself. Research also suggests that peace agreements are more likely to be implemented if all parties involved in a conflict are included in the peace process. What’s needed now are ways to engage the groups most affected by the conflict: rural communities near the conflict lines, women, refugees and Nagorno-Karabakh itself, all of which have been left out of negotiations over the years. Studies have shown that single-shot, top-down peace deals often fail — unless the parties simultaneously build broad-based connections among societies.

Of course, calling for contacts between people while militaries continue patrolling the borders, and without regionwide security guarantees, is unrealistic. All affected parties in the region — including Armenia, Azerbaijan, Georgia and Nagorno-Karabakh itself, nongovernmental organizations, civil-society groups and others need to be involved in crafting broader regional security agreements and institutions. Regional security structures that incorporate all such interests are necessary to support and enable a sustainable peace agreement. Otherwise, connections across conflict lines will remain shallow and limited, and formal peace agreements between governments short-lived.

Such regional security can take the form of regionwide rules, treaties, pacts or issue-focused organizations. They can enable community leaders to work together on shared problems — such as drug trafficking, rural poverty, distorted trade routes, water cooperation or preserving cultural heritage sites — across conflict lines.

Building such connections in the region can help shift diplomacy away from short-term concessions and focus it instead on longer-term, regionwide issues of bread-and-butter governance. Such multilateral forums can dilute the rivalry between Armenia and Azerbaijan, helping various social groups build trust and connections across conflict lines — before international mediators and governing elites ask their people for concessions. Regionwide security guarantees can clarify and affirm nonviolence as a foundational principle for the region, and create the political stability needed to enable deeper diplomacy around the conflict itself.

Citizen Day to Become a National Holiday in Armenia