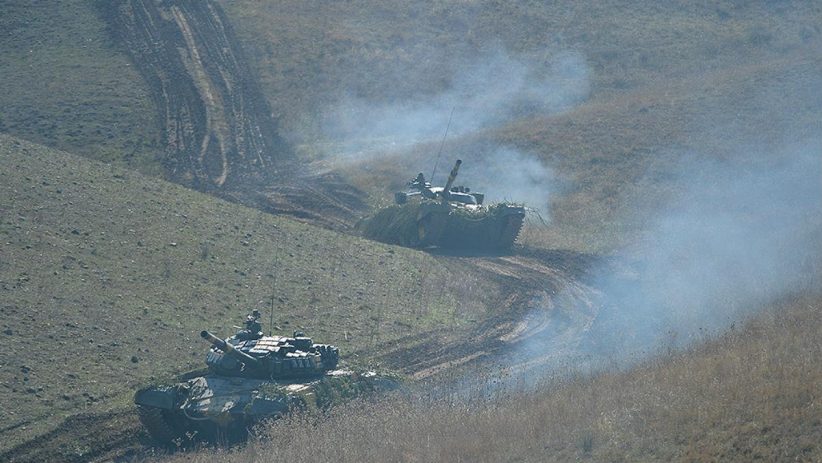 The settlement of Nagorno Karabakh conflict is the number one national security priority for Armenia. Armenia guarantees the security of the people of the Nagorno Karabakh Republic, having supported Karabakh during the 1992–94 war with Azerbaijan and through the years of cease-fire.

Since 1994 Armenia has been involved in negotiation process in order to resolve the conflict with Azerbaijan. In recent years talks focused on the so-called Madrid Principles prepared by international mediators. Armenia accepted these principles as a basis for settlement and expressed willingness to sign a framework agreement during the summit in Kazan, Russia in 2011. If implemented, this agreement would see Armenian forces withdrawn from most of the security zone in exchange for an international guaranteed interim status being granted to Karabakh backed by peacekeeping forces. The final status of the Nagorno Karabakh would be decided via “legally-binding expression of will,” a referendum the details and timing for which would remain undefined. Nevertheless, Azerbaijan refused to sign that agreement, opposing any approach that could even theoretically lead to Nagorno Karabakh’s formal separation.

Since 2011 two key developments have fundamentally changed the equilibrium in the Karabakh conflict. The increased drastic increases military spending made Azerbaijani leadership confident that the balance of power would shift in its favor thus making the strategic goal of returning Karabakh under Azerbaijani control more realistic. Azerbaijan put more emphasis on the use of force, including sniper fire, subversive attacks and artillery bombardments culminating in the April 2016 offensive. In parallel, Azerbaijan was demanding the withdrawal of Armenian forces from the security zone only willing to grant Karabakh “an autonomous status” within Azerbaijan. The strategy was clear: blackmail the Armenians, as well as international community, with a threat of large-scale war and change the status quo with limited use of force.

The second development which has been underway since 2011 with implications for Karabakh conflict is the unraveling of international order. The world is witnessing a relative decline of US influence, still the number one power but one that has lost its hegemonic role. The election of President Trump makes the prospects of the US engagement with the world even more uncertain. Simultaneously, regional powers are vying for more influence within their neighborhood often paying less or no attention to the norms and regulations of the international law. Russia’s actions in Ukraine, Iran’s and Turkey’s military activities in Syria, the Saudi-led intervention in Yemen, China’s assertive policy in the South and East China seas are all evidence of a more chaotic and volatile world and notions of international guarantees increasingly irrelevant.

These developments make the possibility of Madrid Principles-based settlement of conflict highly unlikely. Any changes in the current line of contact without fixing the status of the Nagorno Karabakh will only make Karabakh more vulnerable and increase the possibility of resumption of hostilities as Azerbaijan would be tempted to capture more territory. Given the unraveling of international order the viable guarantee for Karabakh security could only rest on full-fledged international recognition and viable defense.

With Azerbaijan’s war of attrition against Karabakh and Armenia likely to continue, Armenia is left with few real options but try to preserve the current status quo in the mid-term (5-7 years) perspective. The effective way to reach this goal is through a combination of containment and deterrence strategies against Azerbaijan. The containment is implemented through a balanced foreign policy seeking to combine the Russian security guarantees for Armenia through bilateral agreements and membership in CSTO and Eurasian Economic Union while maintaining partner relations with the US, NATO and EU, as long as these entities remain opposed to escalation in Nagorno Karabakh and continue to communicate that position to Azerbaijan.

The deterrence policy is based on continued development of the Armenian military. In this context the “2018 – 2024 Army modernization program” and the “Nation – Army” concept announced by the ministry of defense provide the theoretical framework of this policy. Armenia should also make explicit its right to launch pre-emptive strikes to restrain Azerbaijan, whose leadership has long refused to establish confidence-building measures to reduce tensions and made its hostile intentions clear. Both Azerbaijan and all actors involved in the region should know that in case of an imminent threat towards Armenia and the Nagorno Karabakh Republic, Yerevan would not pursue a wait-and-see approach.