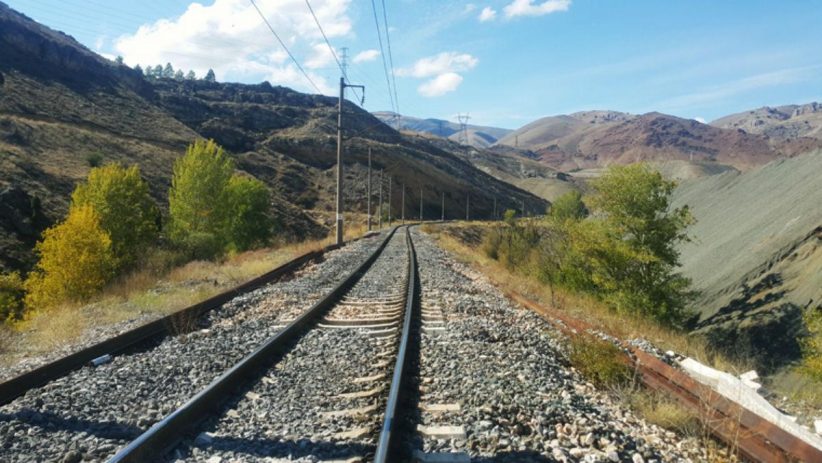 Eastern Express rail now works between Ankara and Kars. After the high-speed train between Istanbul and Ankara started to work, the train to Kars started to commence at Ankara. The line, which is composed of 54 stations, passes through 7 provinces. Although the name is still Ankara-Kars, the train starts in Kırıkkale, in the Irmak Station, stops in Kayseri and goes to Sivas. Turning south from Sivas goes to Erzincan then northward from Erzincan to Erzurum and then to Kars.

There are 3 Greek schools and 1 Greek church in the center of Kırıkkale and there are 10 buildings belonging to Armenians and Greeks in Keskin which is 20 minutes away from the center. The Greek Church, known today as the Karıştıran Church, still survives today. After Kırıkkale, the train passes through Yozgat and enters Kayseri after three stations.

The Eastern Express passes through the Kocasinan district in the center of Kayseri. When walking from the station to the city center, the Armenian Surp Asdvadzadzin Church appears rising on the Inonu Boulevard. After the church was used as a police station for a while and then as a sports hall, nowadays it is in the process of being renovated as a library.

Eastern Express stops at Sarımsaklı Station before moving to Sivas from Kayseri. In Puyandi, with its old name, there is a Greek school and a Greek church; although people remember their places, there are almost no traces left from both.

Eastern Express enters Sivas from Şarkışla. There are as many as 22 registered sites on the map. It continues from here to the center of Sivas. The Sivas city square is full of cultural heritage, The Çifte Minare and the Buruciye Madrasa are the most magnificent of these. Until the 1950s, there was as well the Surp Asdvadzadzin Armenian Cathedral. The people who live around the area which is in the spot of Sirer Pasajı on Sirer Street remember the church very well.

Eastern Express goes to Ulaş, then Kangal in the south, then Divriği in the East. It is possible to see the Armenian graveyards in the centers of Ulaş and Kangal. Both of them are very close to the train stations. Those who want to get away from the center of Kangal may go to Mancılık. Half an hour to see the Surp Toros Monastery in Mancılık is worth the ride. Surp Toros, a medieval structure, was going to be destroyed at the beginning of the 90s, but the Mancılık locals protested against it. When you return to Kangal to get back on the train, you can see the stones brought from Surp Toros on the walls of Kangal Central Mosque.

The Eastern Express goes to Divrigi after Kangal. The Kangal Stream continues to follow the train. Exiting Kangal, the Kangal Stream becomes the Karaboğaz Stream and continues to follow the train. Before entering Divriği, in the village of Kayacık Karaboğaz Stream becomes Çalti Stream, and through the skirts of Demirdağ, passing over the last bridge next to the iron mines, the trains arrives to Divrigi. Right here an old stone bridge appears, called the Girl’s Bridge by the locals. During his journey to Divriği in the 1870s, passing next to this bridge, Priest Karekin Sırvantsdyants said “May God not show these difficult ways even to my enemies.”

In the center of Divrigi you can also visit the remains of the Surp Asdvadzadzin church, just below the marvelous medieval castle and the Great Mosque and Hospital, a site listed on UNESCO World Heritage list. It is easy to find the church, with the walls still standing but a completely collapsed roof. If you really want to go one step further, you can also see the last wall of Surp Yerrortutyun, going from the road of slaughter house passing under Surp Asdvadzadzin.

You can see many other churches, cemeteries, old houses and natural heritage standing in many villages around Divrigi. Eastern Express goes south to leave Sivas again following Çaltı Stream. It passes through the village of Adatepe before leaving Sivas. Here, Çaltı Stream merges with the Euphrates, and when you see the Euphrates, know that you have arrived to at the real East. Pingen, with its old name, a large town with a population of 1,200 people, 4 churches in the center and 5 monasteries in the mountains. Two of these sites can easily be seen today, one in the village and the other on the river bank. The monasteries in the mountain can be reached by a one-day trekking program.

Eastern Express follows the Euphrates and enters the İlic district of Erzincan. While you cannot see traces of the church at the center of İlic, you can go to see the magnificent Surp Dirtad Monastery by a 20 minute drive.

The train follows the Euphrates and passes from İlic to Kemah. 55 buildings are registered under Kemah on our map. While some of them are completely vanished, some are still standing and reachable. In addition, there are two Greeks churches and a school in Kemah’s center. Greek cultural heritage is not often found in this far east. Kemah’s famous castle is also a witness to the old glory of this town. Here are the pagan Armenians temple of Aramazt and the graves of the Arshaguni dynasty, as well as a Persian-Armenian battleground from 367. The last station that the train stops before arriving at the center of Erzincan after Kemah is a 10 minute drive from Alp Village. Garni, with its old name is home of Agavank Armenian Monastery. The monastery, consisting of three separate churches, is an architectural jewel. Here you can find both the beekeepers and look for tombstones with Armenian script.

45 sites are registered in the map that are located in center of Erzincan and surrounding villages. Although most of these structures have disappeared, if you stroll in the old neighborhoods, like Beybasi and you come across a local that remembers the old Erzincan, you have the chance to get some information, you might even get lucky to see some traces. After the center of Erzincan, you may want to go to Üzümlü district, Tsimin or Çimin with its Armenian name. If you go in the right season you may also enjoy Turkey’s only patented grape: Cimin. Right here you can visit Altıntepe Castle and you can feel that you have entered Urartian territory. The castle was later reused, and an Armenian Surp Asdvadzadzin church was built. Remains of the church wall have emerged in a recent excavation.

Eastern Express leaves the center of Erzincan and continues following the Euphrates. The two stations that remain in Erzincan are Demirkapı and Çadırkaya. Üçpınar village, which is in equal distance to both, is Abrank with its Armenian name. The Abrank Surp Tavit Monastery located here is the only church on the list of “places to visit” on the website of the Erzincan Provincial Culture and Tourism Directorate. An Archdiocese sit in 17th century, here can be found in the world’s tallest, 12th century Hachkars – Cross stones that are seven meters tall.

Eastern Express follows Karasu Stream and goes from Erzincan to Erzurum. There are two Armenian churches in the first stop, Aşkale. Here is the Aşkale Plains, part of Northern Plains of Anatolia and is one of the ancient settlements centers in the history of world agriculture.

Eastern Express follows the Aras River from the center of Erzurum, first to Pasinler, then to Köprüköy and then to Horasan. 7 sites in Pasinler, 4 sites in Köprüköy and 5 in Horasan. Even if you cannot find the Surp Asdvadzadzin Church in Köprüköy, you can ask for Meriam Ana Tepesi – Asdvadzadzin Hill to the people who live in the village. Köprüköy’s bridge construction over Aras River dates back to 13th century.

Eastern Express departs from Aras in Horasan and follows the Süngütaşı Stream to the north and leaves Erzurum, entering the sixth and last province, Kars. Still one hour to get to the city of Kars, the train stops for the last time in Sarıkamış. At the center of Sarıkamış, a Russian church is used as the Kazim Karabekir Mosque, while the other Russian church’s known as Yanık (burned) Church, can be found nearbyin ruins. The train, along the way to Kars, runs next to the Kars Stream.

There are many buildings on both sides of the road where the train passes towards Kars. 24 sites are registered in the center of Kars. Among them are the Greek church and school, Syriac monastery, and many other different sites. Perhaps the best known is Surp Arakelots church that has become a symbol of Kars. This building, which is used today as a mosque, is also known as Havariler Church.

Now that you are in Kars, everyone will suggest you see city of Ani. Remember that the city had spread far beyond its the walls, you can especially look for cave churches and stone dovecotes.

By this, the Eastern Express has come to its last stop, but the railways do not end in Kars. Following the Kars Stream, it continues further eastward. The rails extend to Armenia from the closed border gate of Akyaka, a little north of the place where Kars Stream falls in the Arpaçay Dam.

The photostory was published on Hrantdink.org