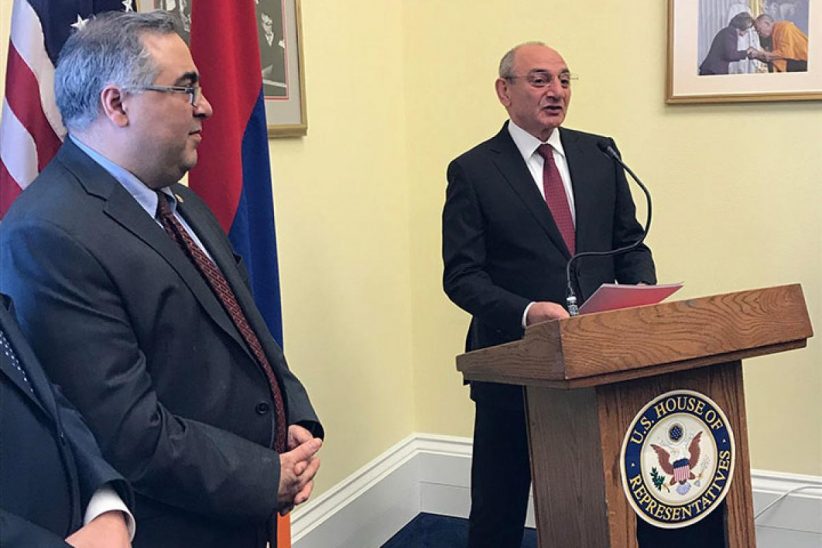 By Joshua Kucera, the article waspublished on Eurasianet.org

Azerbaijan objected, arguing that giving a US visa to the de facto president was an implicit recognition of the breakaway state.

The de facto president of Nagorno Karabakh, Bako Sahakyan, has made an unprecedented visit to Washington to try to boost American support for the unrecognized state. Azerbaijan, which claims Karabakh as its own, called the trip a “serious blow” to US-Azerbaijan relations and threatened to retaliate.

Sahakyan appears not to have visited with any administration officials, but on March 14 attended a reception organized by the Armenian Embassy, Armenian-American lobbying organizations, and pro-Armenian congressional representatives at the US Capitol. It was reportedly the first-ever visit by a Karabakh leader to the capitol building, though Sahakyan’s predecessors did visit Washington in the 1990s.

At the event, Sahakyan gave Presidential Medals of Gratitude to a number of pro-Armenia members of Congress, who called for formal US recognition of Karabakh’s statehood, something no state – including Armenia – has yet done. One of the awardees, California Representative Brad Sherman, recalled advocating for US aid to Karabakh. “The State Department opposed it on the theory that it would be an implicit recognition of your independence. I thought, as they say in Silicon Valley, that’s not a bug, that’s a feature,” he said.

Armenia and Azerbaijan are locked in conflict over Karabakh, which broke away from Azerbaijan in a war in the early 1990s. The de facto Karabakh republic is backed by Armenia, while Azerbaijan vows that it will take back the territory, by force if necessary. The US has stayed relatively neutral in the conflict, and is one of the co-chairs of the OSCE Minsk Group, which is attempting to mediate between the two sides.

Ahead of the visit, a former US ambassador to Armenia called on Washington to formally recognize Karabakh. “It is time for the international community to welcome the Republic of Nagorno-Karabakh—Artsakh—into the community of nations,” the ambassador, John Evans, wrote.

Another congressman honored at the reception, New Jersey Representative Frank Pallone, highlighted the efforts by pro-Armenia members of Congress to encourage visits to Karabakh. Pallone was one of three members of Congress who visited Karabakh last year, ending up on an Azerbaijani blacklist as a result.

“When we were there (in Armenia) in September … we were strongly urged by the Administration, by the State Department not to go to Artsakh, which I think is very wrong that they continue to do that,” Pallone said, using the Armenian term for Karabakh. Pallone then sponsored a resolution encouraging further US contacts with Karabakh. “That is one of the reasons that we introduced this bill – to make it clear that travel and communications with Artsakh – even though it is not recognized by the United States – is very important.”

While the US doesn’t recognize Karabakh, Azerbaijan objected to the fact that the State Department gave Sahakyan a visa to the US “In a situation where the US and Azerbaijan have friendly relations in various spheres, we view this surprising step as a change in the US’s position on the Armenian-Azerbaijani Nagorno Karabakh conflict and consider it to be biased,” the Azerbaijan Foreign Ministry said in a formal note to the State Department. “Considering that the US has sanctioned other separatist regimes in the post-Soviet space, allowing the entry into US territory by the representative of a self-declared regime, created as a result of military aggression and bloody ethnic cleansing against Azerbaijan, represents a double standard.”

Last year, the de facto foreign minister of another unrecognized government, Abkhazia, said he was denied a visa to visit the US when he was invited to attend the National Prayer Breakfast.

“This is nuts! Should have never been granted a visa!” tweeted Luke Coffey, the head of the Foreign Policy Center of the Heritage Foundation, a conservative Washington think tank that has become noticeably more pro-Azerbaijan of late, in response to Sahakyan’s visit.

Foreign Ministry spokesman Hikmet Hajiyev threatened the US with unspecified retaliation. “This sort of move by the US causes serious harm to relations in the eyes of the Azerbaijani people and public opinion,” he said. “In response to this behavior by the US, Azerbaijan will proceed from the principle of reciprocity.”