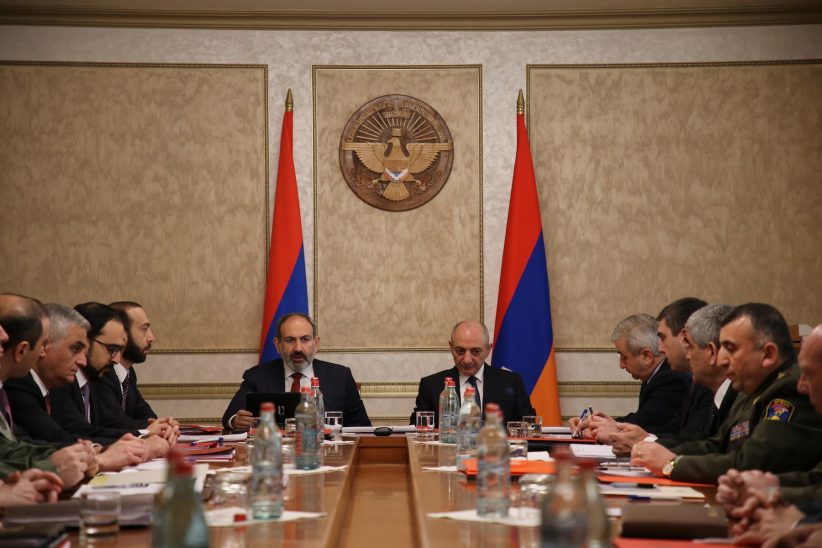 The meeting’s agenda included a joint assessment of the current situation in the Karabakh peace process as well as an outline of coordinated efforts. Both Pashinyan and Sahakyan made speeches before discussing the agenda items.

In his first visit to Karabakh following the December 9, 2018 parliamentary elections, Pashinyan stated that the relations between Armenia and Karabakh have entered a qualitatively new stage.

Sahakyan, in his opening remarks, said that the top priority is the international recognition of the independence of the Republic of Nagorno-Karabakh and that the joint meeting would address ways of achieving that goal.

The meeting comes after Pashinyan said last month that one of the most important issues for Armenia in the negotiations process is the full involvement of Karabakh.

During the joint meeting, Pashinyan stated that while he represents Armenia, and Azerbaijani President Ilham Aliyev represents Azerbaijan, there is no legitimate representative for the Armenian people of Karabakh in the negotiations process.

”The main question is who should represent the people of Artsakh, the Armenians of Karabakh, in the negotiation process,” Pashinyan said. “This issue will continue to be one of the most important points of our discussions with Azerbaijani President Ilham Aliyev and the OSCE Minsk Group Co-Chairs.”

On March 9, the Organization for Security and Co-operation in Europe (OSCE) Minsk Group announced that they are preparing for a meeting between Pashinyan and Aliyev.

The members of the Security Councils of Armenia and Karabakh reiterated their support and commitment to the “exclusively peaceful settlement of the conflict under the auspices of the OSCE Minsk Group, based on the fundamental principles of international law, in particular the right of peoples to self-determination,” according to a press release from Pashinyan’s office. They also emphasized that the security and the status of Karabakh were absolute priorities.

This meeting takes place at a time when, as Emil Sanamyan, a Washington-based reporter and a specialist on Karabakh, said, there is some obvious distrust between Pashinyan and the government of Karabakh.

“This [distrust] became public before the December parliamentary election, and later resulted in the removal of General Levon Mnatsakanyan, the Defense Army commander,” he explained.

“It appears, the outgoing president Bako Sahakyan has selected retired General Vitaly Balasanyan as his successor. Balasanyan has criticized Pashinyan for prosecuting Robert Kocharyan and former senior military officers over March 1, 2008 clashes,” Sanamyan said. “Pashinyan could endorse another candidate in the Karabakh elections. This uncertainty regarding the next Karabakh leader is a factor that has its bearing on Pashinyan’s ability to negotiate.”