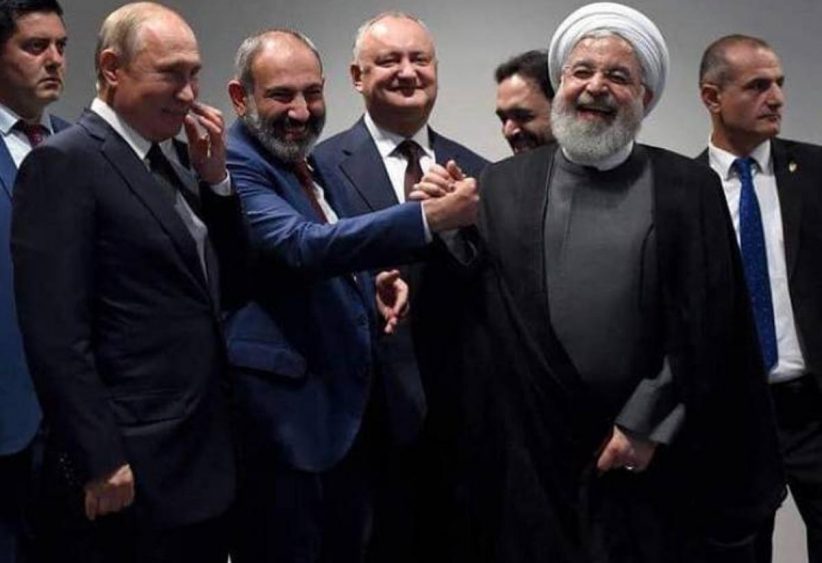 A large delegation headed by the Iranian president Hassan Rouhani was in Yerevan on October 1 to attend the Eurasian Economic Union (EAEU) Supreme Economic Council meeting. An interim agreement on the establishment of a Free Trade Zone between the EAEU and Iran comes into force this month. Iranian political analyst, Al-Monitor’s contributor, assistant professor of regional studies at Shahid Beheshti University Hamidreza Azizi talks to CivilNet’s Stella Mehrabekyan on topics related to Iran’s increased interest in the cooperation with EAEU and Armenia particularly.

– What is the significance of the cooperation with the EAEU at this stage of Western sanctions against Iran, both politically and economically?

– The decision to strengthen and develop ties with neighbors, as well as non-western powers came well before the US withdrawal from the JCPOA (Joint Comprehensive Plan of Action) and the new round of sanctions. Actually, right after the conclusion of the nuclear deal in 2015, the Iranian administration started to devise a more concrete strategy toward expanding ties with the neighbors in order to make a balance in its foreign policy, which was previously dominated by the Western concern, as Iran was trying to reach a deal with the West on the nuclear issue. Apart from that, the expansion of ties with Russia and China, as the two main non-Western world powers, came even before the nuclear deal and since the beginning of Hassan Rouhani’s presidency we’ve witnessed an upward pattern in relations between Iran and these two powers. But indeed, now that the country is under strict US sanctions, the non-Western – I prefer to say Eurasian – vector in Iran’s foreign policy has gained even more importance. In terms of political benefits, Iran has been trying – with a great deal of success – to show that the US pressures would not result in Iran’s isolation in the world arena, and the current status of relations with the Eurasian countries and their political support for Iran, show this very well. In terms of economic objectives, Iran tries to define and establish various non-dollar channels in order to sustain its international economic interactions. This is why the EAEU can be a suitable context for Iran to pursue its economic diplomacy.

– Iranian public opinion and the Iranian government alike, highly value the country’s ties with Armenia and the overall perception about Tehran-Yerevan relations have been always positive. As a result, almost all the analyses about Rouhani’s recent visit to Armenia were positive, both in terms of bilateral ties with Yerevan and multilateral diplomacy within the EAEU. As for the Iranian view toward political changes in Armenia, the overwhelming view in Iran was that it’s a purely domestic issue. Iran’s only concern was the possibility that the events might have caused instability in Armenia, which would affect Iran directly because of its neighborhood with Iran. But fortunately, the calm came back to Armenia very soon and the new administration showed that it’s stick to the policy of good relations with Iran.

– During a meeting with Armenia’s Prime Minister Nikol Pashinyan, Hassan Rouhani stated that Iran is ready to expand the gas and electricity project with Armenia and deepen cooperation in the energy sector. How realistic is the prospect of Iran supplying gas to Armenia outside the formula gas-for-electricity? Armenia, for example, buys Russian gas at $165 per 1,000 cubic meters. Do you think Iran could be an alternative to Russia on that price frontier? In general, to which countries and at what price does Iran sell gas?

– I don’t have specific information of the prices, as this is not my exact field of study. But from the geopolitical point of view, Iran has neither the interest, nor the capacity to compete with Russia in the energy field. But Tehran believes that based on the supply-and-demand logic, there’s room for further cooperation with Armenia in this field. For now, the main problem facing the realization of the project is not Russia, but the US and its sanctions. That’s because any enhancement in the bilateral ties in the energy sphere needs the development of infrastructures, and the development of infrastructure needs financial resources. This is a filed in which Iran is experiencing hardships as a result of the American sanctions.

– Armenia is opening an embassy in Israel. There are worries in some Armenia’s circles that this may in any way affect Armenian-Iranian relations. How was this fact perceived in your country?

– I haven’t seen any official reaction to this issue so far in Iran, but there are real grounds for concern. Israel has for decades been trying to advance a policy of “encirclement” against Iran by trying to expand its influence in the countries with shared borders with Iran and Iran has always been sensitive toward the Israeli moves in its vicinity. So, I think Armenia should be cautious in managing its relations with Israel respecting Iran’s red lines in this area. Maybe the mere opening of an embassy would not provoke a reaction from Iran, but in case of the expansion of Israeli activities against Iran using its ties with Armenia, there will definitely be a reaction in and this will negatively affect Tehran-Yerevan ties.

– According to Prime Minister Nikol Pashinyan, our relations with Iran should be as far from geopolitical influences as possible. We also remember now former US President security adviser John Bolton’s visit to Armenia and the talks of his possible pressure on Yerevan. To what extent do you think Tehran and Yerevan really manage to keep their relations free from geopolitical influence?

– So far, they have been able to fulfill this hard task for about three decades, because the American desire to drive a wedge between Iran and Armenia has always been more or less in place, but the two sides have managed to continue their cooperation. As a result, I think as long as the political will to develop ties is in place, the “third actors” won’t be able to influence this bilateral relationship in a negative way.