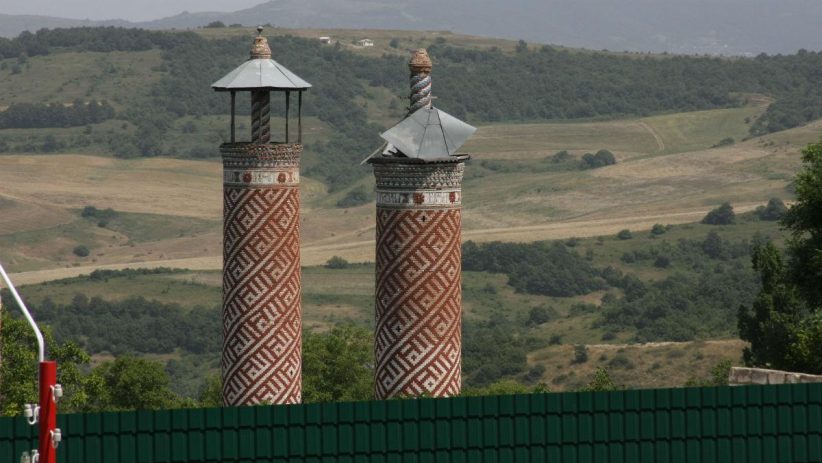 Ruben Vardanyan’s IDeA Foundation to support the restoration of Upper Mosque in Shushi.

Within the framework of cooperation between the Initiatives for Development of Armenia (IDeA) Foundation, the Government of Nagorno Karabakh and Revival of Oriental Historical Heritage Foundation, the restoration program of Gohar Agha (Upper Juma) Mosque is already underway.

The restoration program of Gohar Agha (Upper Juma) Mosque in Shushi kicked off in 2015 when a donor of the IDeA Foundation, entrepreneur Kairat Boranbaev expressed a wish on visit to Armenia and Karabakh to support and have his input in the restoration of the Mosque and made a substantial donation to this end.

Within the framework of the restoration program, the IDeA Foundation acts as a platform between the Government of Nagprno Karabakh, the Revival of Oriental Historical Heritage Foundation and the donor.

The program aims to fundamentally restore the Gohar Agha Mosque by securing its original appearance, renovating the adjacent area and carrying out works aimed at capital strengthening of the madrasa building located close to the Mosque in order to prevent collapse of the building in the future. The program will enable to preserve this architectural monument and use it as a cultural and tourist destination in the future. Currently, construction works are underway in the territory of the Upper Mosque. Earlier geological and geodesic studies were completed, archaeological excavations were conducted, projecting works were brought to an end and preliminary calculations were made.

“Shushi is one of the unique places in Karabakh and the Upper Mosque forms an integral part of the ancient city’s history and culture. We are happy to see that one of our donors has expressed a wish to make a donation for the restoration of this unique monument. The program will not only enable to present the historical and cultural heritage of the region and Shushi, but also establish a new hub on Nagprno Karabakh’s touristic map,” said Suren Amirbekyan, Manager of Artsakh Development Program at the IDeA Foundation.

Since the Upper Mosque represents the history and culture of Iran, Part Saman Jahan architectural firm and specialists from the Islamic Republic of Iran have been engaged in the monument’s restoration works. ICOMOS Armenia (International Council on Monuments and Sites of Armenia), the partner of the program, conducted an examination to make sure the design works comply with international standards.

Restoration works in the territory of the Upper Mosque in Shushi are scheduled to be completed by fall, 2018.

The IDeA Foundation was founded by entrepreneurs and philanthropists Ruben Vardanyan and his wife Veronika Zonabend. Foundation aims to promote social entrepreneurship and ensure the sustainability of long-term, non-profit projects that achieve tangible socioeconomic development.

A Small Nation Can Maneuver Amid Big Powers

What Can Armenia Learn from Ireland?