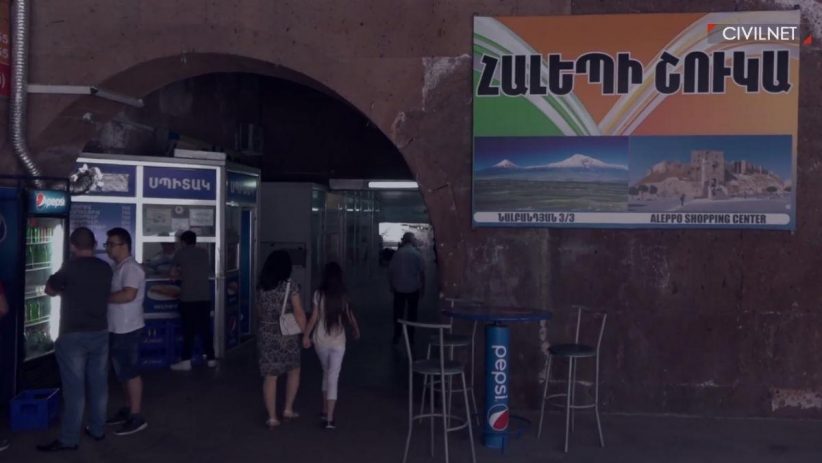 Dalida Degirmenjian says Armenian women lived like queens in Aleppo. The mother of three tended to the family home while her husband earned a steady income as an auto mechanic.

“In Aleppo, we wouldn’t work,” Degirmenjian says. “But when we came here, and the men didn’t find work, the women have to assist.”

Degirmenjian moved to Armenia three years ago, joining millions of Syrians forced to flee civil war and political persecution in their home country. She is among more than 22,000 Syrian refugees who have resettled in Armenia, according to the Ministry of Diaspora.

Degirmenjian learned the recipes for her rosewater-soaked baklava and cheesy baked phyllo from her mother and grandmother. Her eponymous pastry shop is one of several Syrian-owned businesses within the underground metro station; they are known collectively as Aleppo Market.

A few doors down from Dalida’s Kitchen, Bedros Kirasian arranges plastic tubs of black and green olives on a warm Tuesday afternoon. The aromas of freshly ground spices — fragrant cumin, fennel seed, cardamom — fill the air of his small storefront.

Kirasian imports most of the goods from Syria, using shipping routes through Lebanon, Turkey and the United Arab Emirates. While it can be dangerous to source products from the war-torn nation, he says the authentic flavors of Syria have made Aleppo Market a popular destination for locals and tourists alike.

“All of the Syrians who come from outside or tourists who come from Europe and other countries want to come here to see the people of Aleppo,” Kirasian says.

Kirasian, who moved to Armenia in 2012, was the first vendor to set up shop in the metro station. Over time, he gathered friends, acquaintances and family members from Aleppo, and expanded the market to what it is today. The offerings now include a barbershop, sportswear boutique and sandwich stall.

“I say here that we don’t have customers. All of them are friends. Even people we don’t know, we turn into friends,” Barsomian says. “They help me a lot.”

A century ago, Armenians fled to Syria to escape genocide at the hands of the Ottoman Empire; now they have been forced to leave yet another nation ravaged by war and human suffering.

Unlike in other countries, the Armenian government regards Syrian-Armenians not as refugees, but as members of the global diaspora. They share a common ethnicity, language and religion, and practice similar cultural traditions, as the local population.

The government eases the integration process by immediately granting Syrian-Armenians citizenship and access to social services such as healthcare and education. Still, the adjustment period has been far from simple for the thousands who have moved to their ancestral homeland.

Degirmenjian, Kirasian and Barsomian hadn’t planned to open brick-and-mortar stores in Armenia. But after struggling to find formal employment, they turned to entrepreneurship in the service industry.

“You need to get used to it,” Kirasian says. “If you work, you will live well. If you sit lazily, you can’t do anything.”

Although Armenia offers limited economic opportunities, the country provides a safe haven — and sense of community — that many Syrian-Armenians have come to value.

“Life in Armenia is very good. The people are good. All in all, it is important that everyone is Armenian,” Degirmenjian says. “In your motherland, you are safe.”

International Humanitarian Law in an Age of Changing Warfare