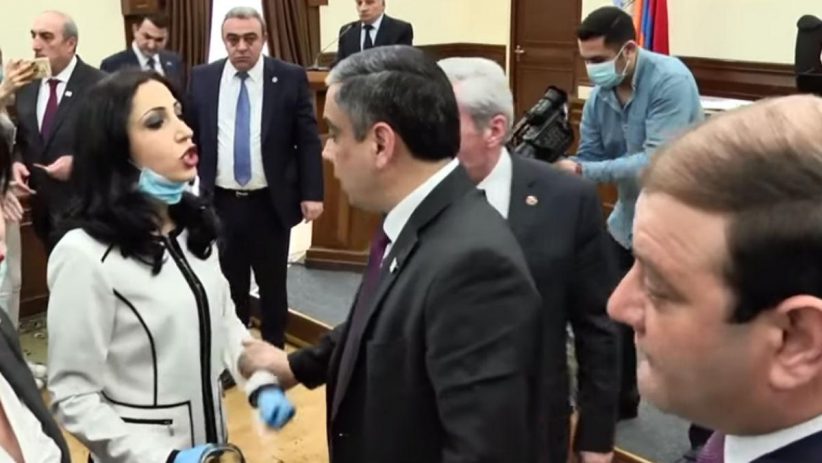 An attempt by members of the Yerevan City Council to raise awareness about the health effects of damaged sewage infrastructure resulted in a dramatic scuffle between female and male members of the council. The incident raised concerns about organizational and professional standards that the city council operates at as well as violence against women.

Roughly five years ago, line pipes of the Nubarashen penitentiary had been damaged. Since then, sewage flows on the surface, leaving behind a pungent smell that causes health issues for the residents of Erebuni District of Yerevan.

Here is what happened

– On February 13, Yerevan City Council session resulted in a scuffle between members of Yerkir Tsirani Party and the Republican Party of Armenia.

– During the session, two female members, Marine Khachatryan and Sona Agekyan, of Yerkir Tsirani brought bottles of sewage water and attempted to approach the Mayor of Yerevan, Taron Margaryan, and have him smell it.

– The Republicans blocked the women from approaching the Mayor. A brawl broke out, and the Republican members attacked the two women.

– Yerkir Tsirani supporters and activists staged a protest outside the Yerevan mayor’s office demanding council members who used force against the two female members to be brought to justice.

– On February 14, the Municipality of Yerevan finally tackled the issue and started work on Nubarashen penitentiary line pipes.

– Immediately after the publication of data on violence against the two members of Yerkir Tsirani faction, the Human Rights Defender has appealed to the General Prosecutor to initiate criminal proceedings.

– “We can not encourage such behavior. At the same time, the problem is in the area of law enforcement and I do not want to make any comment, ” said RPA spokesman Eduard Sharmazanov օն February 15, referring to the scuffle at the Yerevan Council.