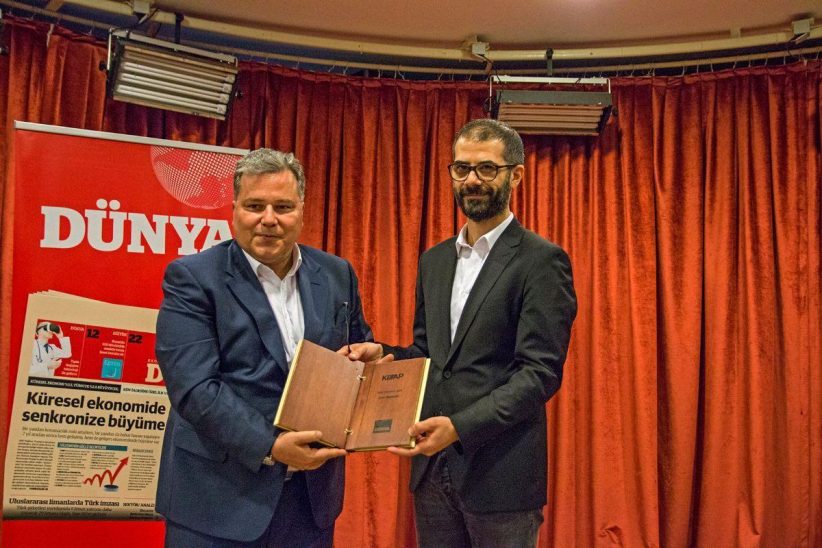 Founded in 1993 by Hrant Dink, Mgrdich Margossian and Edward Tovmasyan, Aras is the only publishing house in the country that publishes books in Armenian and Turkish. It was created as a means of bridging the cultural legacy of Turkey’s Armenians to that of future generations.

“We understand this award as a sign of increased understanding of the importance of the Armenian problem, culture, literature and history in the struggle for a more democratic and pluralist Turkey,” editor-in-chief of Aras, Rober Koptaş, told CivilNet.

Koptaş spoke about the significance of the award in the current political climate: “Although there is a unbearable atmosphere in Turkey on the basis of demolition of all democratic mechanisms and institutions, there is always strong solidarity among civil and democratically minded circles. The award is really prestigious because it comes from a newspaper with a tradition and it is the only award given to publishing houses whole year.“

Koptaş received the award on behalf of Aras from award committee member and writer Başar Başarır at a ceremony on January 24.

Calling Aras the “window to Armenian literature, history and culture with its special, meticulous and quality books for years,” the Dünya award committee said the publishing house shows that “understanding each other can be possible and sustainable through art and literature.”

In his speech, Koptaş thanked everyone involved with the publishing house, including authors, translators and readers who keep it alive.

“We work with the awareness that books and literature play an important role in overcoming prejudices between peoples and eliminating the obstacles, and have always tried to publish meticulous and quality books despite difficult conditions,” Kopaş said.

Koptaş dedicated the award to all the citizens of Turkey who are jailed and prosecuted because of their thoughts, particularly Aras board member Osman Kavala who is currently imprisoned.

“We dedicate this award to our board member Osman Kavala who has been unjustly in jail for 450 days and to all prisoners who fight with their thought for democratization of Turkey,” Koptaş said. “We send our feelings of solidarity and greetings to all publishing houses that are suppressed, ignored, publishing books concerning all the oppressed groups, claiming rights and being sensitive to the efforts of those who claim their rights.”

A philanthropist and businessman, Kavala was arrested by Turkish authorities in October 2017, and has been held in solitary confinement since, without indictment. Kavala is being accused of overthrowing the government.

President Recep Tayyip Erdoğan has detained more than 160,000 people since the failed military coup in 2016, and his administration has banned hundreds of news outlets and civil society groups.

Yerevan to Get Two New Subway Stations And a Ropeway