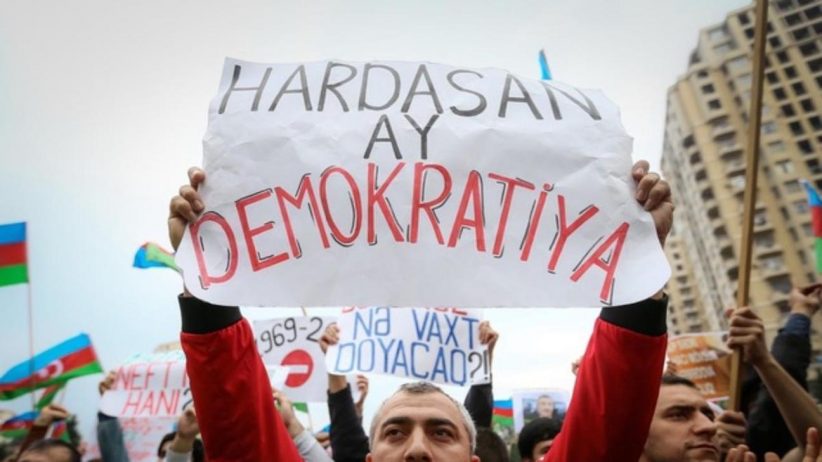 On January 19, nearly 20,000 attended what has become one of the largest protests in recent years in Azerbaijan’s capital of Baku. The country’s opposition organized the demonstration, calling for the release of imprisoned blogger Mehman Huseynov and other political prisoners.

Huseynov, who has been sentenced to two years in jail, was presented with new charges in December of 2018, in response to which he began a hunger strike. The European Parliament and various international human rights organizations criticized authorities, demanding freedom for the blogger. In a letter addressed to Azerbaijani President Ilham Aliyev, Huseynov asked the leader to intervene in his case. Since then, the prosecutor’s office has suspended the new criminal charges.

In a conversation with CivilNet’s Stella Mehrabekyan, prominent Azerbaijani journalist and blogger Arzu Geybullayeva discusses the recent wave of protests in Azerbaijan, the developments in Mehman Huseynov’s criminal case, the unifying civil society, and the current public mood in Azerbaijan.

Stella Mehrabekyan: The opposition claims that around 20,000 people have taken part in the recent rallies. There have been rallies before, the issue of the political prisoners is not new as well, but this time it seems more people have mobilized. What do you think is the reason?

I think in a country like Azerbaijan where we have gotten so used to injustice and crackdown, that the sense of unity that came out as a result of these recent weeks was something inspirational. Perhaps even a morale boost among the civil society community.

As for the rally – the authorities in Azerbaijan have always claimed lower turnouts at opposition rallies. Rather than focusing on the numbers, I think it is rather important to focus on the sense of unity we have observed in the recent weeks, the campaigning, and of course, the results – authorities dropping charges against Mehman. Having said this, neither Mehman, nor any of the other political prisoners currently serving time behind bars should be locked up in the first place. And if the authorities claim to show their “human” side then why not drop all charges immediately and release all of the political prisoners?

Dropping fake charges and promising to release Mehman doesn’t make them human. It only shows that oppression and inhumane treatment of activists is an act at which Azerbaijani authorities are very good at. And had it not been for the hunger strike, the unity, the EP resolution, and other recent examples and the headache it all caused the authorities, who knows what would have happened.

SM: The opposition criticized the authorities for their “overly lenient” and “peace-loving” position on Nagorno Karabakh. What does this mean?

AG: My understanding of the criticism (by the opposition) was not necessarily about the steps forward or the positive reflections on recent wave of negotiations (between the two governments) but about the package that is being discussed between the leaders.

One of the biggest questions asked by the opposition is the kind of negotiation package being discussed. Does it mean that Azerbaijan is taking a step back from the “step by step” resolution plan or does it mean that Armenia has agreed to return occupied territories around Karabakh? Another question that is asked is whether Nagorno Karabakh will have its own referendum.

And since the content of these as well as previous negotiations continues to take place behind closed doors, naturally it creates ground for these and other questions to be raised.

SM: How do you assess the overall public mood? Is it possible for these protests to grow into something larger?

AG: This is a tough projection to make. On one hand, seeing the solidarity among people has given me hope, on the other hand, it is important to see this momentum grow rather than get lost as government takes a step back.

Timing is an important factor as well as commitment of the Azerbaijani civil society. Because it isn’t just about the opposition parties, it is about the wider civil society, and how it keeps this momentum going.

SM: To what extent is Azerbaijan’s opposition united, and if it isn’t, what are the reasons?

AG: January 19 protests are just a start of what might turn into larger grass root organizing, awareness and finally, possibly stronger, and rooted resistance.

But as I tried explaining, much of this feels new and unchartered territory after years of crackdown, weakened civil society and persecution. For the opposition, having seen, wider than usual support among the people during the January 19 protests, it is certainly a sign of hope that not all is lost and that people care about the future of Azerbaijan.

Having said this, Azerbaijani oppositions’ opponent [the government of Azerbaijan] still holds the strings to all control mechanisms. The fact that scores of protest attendants were called in for questioning (thanks to facial recognition cameras used at check points) after attending the rally on January 19, indicates how easy it would be for the authorities to keep crushing any form of dissent.

SM: Has Armenia’s Velvet Revolution had any influence on the events currently underway in Azerbaijan?

AG: I think the recent awakening is largely due to one man’s story and his act of resistance. And that is Mehman Huseynov who used the only option he had – a hunger strike – to protest the injustice. His act of resistance, sparked others to either join the hunger strike, or join the campaign calling to end this inhumane treatment of Azerbaijani political prisoners. Surely, watching the events unfold in Armenia cannot be dismissed but it is certainly not what sparked the unity we are currently observing in Azerbaijan.

Read More: EU, World Bank to Allocate Over €730 Million for Projects in Armenia