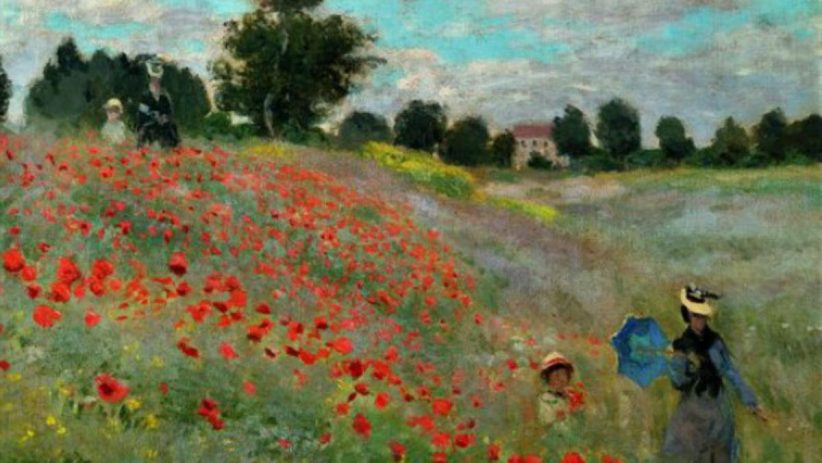 By Maral Boyadjian, author of “As the Poppies Bloomed”

All four of my grandparents were survivors of the Armenian Genocide of 1915.  And they were each the only remaining members of their families.

Of the four, my maternal grandmother was the only one I ever knew. She was about 5 years old when the genocide began and at that age she believed she knew two things. One was that she came from the village of Gesaria in Eastern Turkey, and two, that the floor of her father’s home had shiny white tiles.

My grandmother was taken by Bedouin Arabs who lived in the deserts of Der Zor.  For about the next eight years of her life, she was sold, exploited and abused by different Arab, Kurdish and Turkish tribes.  She was given a very large tattoo on the inside of her lower arm to mark whose property she was. She was  taught to serve them, work with them, dress like them, speak their language and worship as they did. But for comfort and warmth, at night she snuggled close to the bellies of their camels.

She was about 13 when my grandfather spotted her, and knowing that she was a captured Armenian girl, bought her. My grandfather was much older than my grandmother.  He was a merchant who had lost his wife and children during the massacres. He married Guluzar and by the time she was 15, she found herself in Syria with a husband and soon after, a daughter, my mom.

For many reasons, Guluzar was not willing to live with my grandfather.  She took my mother and left him to go live in an orphanage, and together they endured years of poverty and hunger. My mother never forgave her for what she called this selfishness.  She felt Guluzar deprived her of the safety and security of a life with a father who could provide for her.  But in retrospect I realize that Guluzar, at the age of 15 had already learned to trust no one.  And poverty and hunger – so what? That was all she knew anyway.

There were, at that time, philanthropic organizations like the Armenian Relief Society, the Armenian General Benevolent Union, European and American missionaries, and others where women actively aided the genocide survivors, but my grandmother’s life was such that she could never join their ranks.  She was like the thousands of other orphaned Armenian children, just slowly returning from the dead.  She could walk and she could talk, but she couldn’t forget.

They scraped by. But they both had a jealous craving for dignity.  What had happened to them and their people they could never understand, but my grandmother never forgot that she was meant to grow up in a large house, with a father and mother, and Osana, and a floor of shiny white tiles.

While my grandmother lived her days wary and suspicious and mistrustful, my mother was just angry.  She became a teacher and taught English and science. She married and had three children. Tired of being counted among the weak and needy, she joined the Armenian Relief Society. She was openly outspoken about the plight of the Armenian nation.  So outspoken that in 1963 she was blacklisted by the newly nationalistic Syrian government, and our family had to leave Syria immediately, or we feared Mom would end up behind bars.

Grandma joined us soon after, in The States, in our little house in Encino.  And she was my roommate.  Guluzar, a grown woman, was a paradox.  I was about 6 or 7 and delighted to have a roommate, but I could see straightaway that the woman was different. Certainly different from the grandmothers of the kids I went to school with or played with from the neighborhood.

After the orphanage, Grandma had worked as a housemaid for a well to do Syrian woman for many years. While in her employment, she had learned to bake, sew and clean and she took over those jobs completely when she lived with us.  Even before there were Armenian stores in Los Angeles, my grandma baked bread and  lahmajun, beurag, choreg and kakhke,.  Pita bread of all sizes .  Dolma, sarma and kufta.   She even made string cheese for us. Once a year, she stood over a large steamy pot of salt water, and repeatedly dipped her cheese filled hands into the steaming, salty water, stretching and coiling the cheese into twisted bundles.  Proud of her bright red, aching hands.

She loved us innately. But she had no clue as to how to nurture us.  She would plunge her hands into that boiling water to make string cheese for us, but she wouldn’t let anyone watch her and help.  She would clear the kitchen on baking day, and never showed anyone her measurements.  If we inexpertly tried to wrap sarma with her, she would snicker  at our lopsided  efforts.  She had only ever been ridiculed at her ignorance  and she jealously  coveted all she did know.

She had a jealous craving for dignity.

I loved my grandmother, but I knew to keep my distance from her as well.  When she wasn’t in the throes of baking and  cleaning, she would sit crossed legged in a corner of the house, on a small carpet she had woven herself, and think.  She never sat on the sofa. Sometimes she would gaze at the inside of her arm and inspect the intricacies of the tattoo as if she had never seen it before.  I knew then what was coming.  I would listen to her tell and re-tell the beatings and the hair pullings she had endured.  Her mother’s screams .  The nights she cried and never slept. She would ramble in Arabic, and talk about the bitingly cold desert nights. But her voice would always soften and she would smile when she spoke of the camels.

She never reacted normally to even a knock at the front door .  She would peer through the curtains, and if it were a stranger, she would whisper, “Thief! Hide!”  and leave me cowering under the dining room table while she would go off to hang the laundry.

She prayed several times a day, on a small prayer rug she had made herself.  She wrapped her head with colorful scarves and faced east.  Open palmed she raised and lowered her body.  But she prayed to God, in Armenian.  I could hear her every morning.

While some genocide survivors choose to never speak of the horrors they witnessed and lived through,  Guluzar was not one of those.  She spoke regularly of what happened to her and what she witnessed.  It broke my heart.  It broke my heart that it could happen at all, that it had happened to my people, and that it had happened to my grandparents. I pulled away from those stories when I should have listened harder, and I should have asked questions.

I was young.  I wanted to live my life and be carefree like the kids I went to public school with.  But I couldn’t ever be like them.  I was different.  I was Armenian and I had a secret .  My family – my people, were victims.  We had suffered heinous crimes. We were victims of heinous crimes, and our perpetrator belittled us and called us liars.

The other kids at school thought the world was kind and the world would provide.  At the age of 10, I already knew different.

I was different.  And no matter how well I lived as a citizen of the United States, I could not get away from the fact that I was different and that I had a responsibility to right a wrong.

My daughter came home one weekend and told me that one of the new girls she had met at school had never heard of the Armenian genocide.  This girl had asked my daughter what book she could read to learn about it.  I can tell you I will never forget that moment. I still remember where I was standing, what time of day it was, and how my entire body felt singed.  I had no idea what to give this girl to read.  She was 18.  She was a college freshman with a certain amount of free time and a certain amount of interest in learning about the Armenians, and while I should have had about a dozen books to pull from my shelves to give her, I realized I didn’t.  And that was the moment I decided that I would write just that type of a book. I would write a historical fiction novel, the kind of book I would want to read, where the excitement begins on page 1, where the book is full of secrets and adventure, and the ending is such that one never forgets who the Armenians are.

It was important to me that I depicted us as a people, and not just victims of genocide.  It was important that I filled in all the holes my grandma had left gaping — through no fault of her own.  She was too young to know the type of people who made up her village; how they made a living; why they dressed as they did; what crops they grew;  what forms of recreation they had…

So began my five years of researching and writing; studying maps and atlases, reading one heart wrenching memoir after another, novels and history books.  I travelled to the very villages in today’s Eastern Turkey where the Armenians have lived for 3000 years and more, and found that it wasn’t mythical at all.  It was real. And beautiful. And while traces of our civilization are being systematically wiped out, I recreated them in AS THE POPPIES BLOOMED. I write about the village leader, and the beekeeper; the ironsmith and his scornful wife; the busy village square, and the young fedayees who move at night; and about Anno and Daron who dream of a life together to marry and love as all people are entitled to.

My grandmother, my mother, my daughter, and I, are all victims of genocide – We do not have the luxury of loving and living for ourselves. We are linked by loss, by terror, by faith and by hope. And as time has proven, strength.  We are the women who remember yesterday, but live for tomorrow. We have a responsibility – to continue to live and create – as all people are entitled to.

The 'Other' Citizens of Turkey: Hratch Tchilingirian discusses discrimination against Armenians