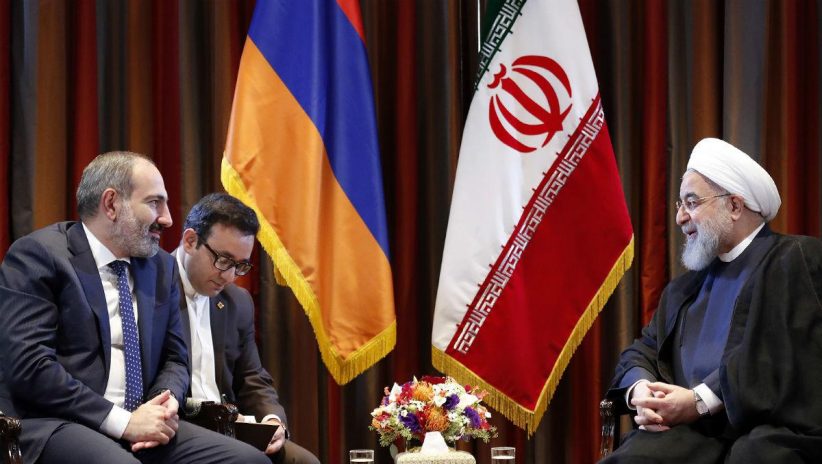 The article was originally published on Jamestown.org

Armenia’s Prime Minister Nikol Pashinyan held talks with Iranian President Dr. Hassan Rouhani, on September 26, on the sidelines of the United Nations General Assembly, in New York (Premierminister.am, September 26). The meeting, initiated by the Iranian side, was immediately heralded as signifying a new era of amicable relations and strategic interaction (Panorama.am, September 27). Reportedly, the leaders touched upon a wide spectrum of issues, including trade and economy, transport logistics construction, as well as regional security challenges. President Rouhani noted that “the countries boast a high level of mutual trust” (Mehrnews.ir, September 26).

The perspective of dynamically developing ties with Iran fits into Pashinyan’s concept of forging long-term strategic relations with pro-Western democracy Georgia as well as theocratic authoritarian Islamist Iran (Hetq.am, June 5). Trapped in a conflict with arch-rival Azerbaijan and under an economic embargo by Turkey, landlocked Armenia considers positive diplomatic relations with its remaining neighbors, Georgia and Iran, to be of paramount importance. Moreover, the idea to pursue a qualitatively new paradigm of partnerships with Tbilisi and Tehran is plausibly driven by Pashinyan’s objective to build a foundation on which to balance Armenia’s profound dependence on Russia.

Earlier this year, in a phone conversation with Rouhani, the new Armenian prime minister reassured Iran’s president that Yerevan would continue to avoid any “anti-Iranian” international initiatives, which helped to dispel concerns in Tehran about the recent democratic revolution and resulting regime change in Armenia (Isna.ir, May 14). Soon thereafter, with bilateral trade turnover having grown to $264 million (Panorama.am, February 2), Pashinyan inaugurated the long-articulated Meghri trade zone in Armenia’s south, designed to boost economic/trade development with Iran as well as enable the establishment of new joint ventures. The Meghri trade zone is widely understood to be a key connection for Iran to be able to access the Russian-conceived Eurasian Economic Union (EEU), which Armenia joined in 2015. Interestingly, however, the interim free trade accord reached between Iran and the EEU last May makes no mention of the Meghri site (Eurasiancommision.org, May 17).

In contemporary International Relations studies, the alignment between the market-leaning Christian democracy of Armenia and the Islamic theocracy-based authoritarian regime of Iran is often seen as a sporadic example of good neighborly relations between contrasting types of state systems (Edward Wastnidge, Diplomacy and Reform in Iran: Foreign Policy under Khatami, 2016). This harmonious coexistence, however, is heavily based on historically shared interests and ethno-cultural similarities derived from civilizational closeness. Furthermore, it is underpinned by a mythologized ideational-political narrative in both societies about the competition between the “Turkic World” and “Pax-Iranica.” Nonetheless, Armenia and Iran have hitherto failed to reach an all-embracing strategic treaty, despite repeated attempts in past years.

The first visible efforts to develop an all-encompassing, institutionalized, long-term partnership were made under the presidencies of Mohammad Khatami and Robert Kocharyan, who assumed power in Iran (1997) and in Armenia (1998), respectively. The so-called Dialogue Amongst Civilizations concept, vigorously articulated by Khatami, become an operational framework for structurally renewing Iran’s foreign policy strategy, which hence reinvigorated Yerevan-Tehran ties. It suggested a milestone plan to reach a trilateral pact initially comprising Armenia and Iran as well as Greece. Based on this interplay, it was envisaged that Georgia, Syria, Cyprus and Bulgaria would also subsequently be drawn into this alliance. Outlining the negotiations held in Tehran in June 28, 1999, then–Greek defense minister Apostolos-Athanasios Tsokhatzopoulos announced that Greece, Iran and Armenia would soon allegedly sign a defense cooperation agreement to substantially reinforce the tripartite Treaty of Friendship and Cooperation, adopted back in 1997. The statement ultimately sparked discontent in the United States and Russia, however. And the process of trilateral rapprochement was derailed, restraining Greece and Armenia from further steps, including the presumed exchange of military expertise and technologies.

As WikiLeaks revealed, the pressure tactics applied by some US officials but most aggressively by Russia resulted in revisions to the Armenia–Iran gas pipeline, which was then under construction. The initially agreed-upon pipeline diameter were severely downgraded, making it of little use even for Armenian domestic needs. And later, as a result of corrupt deals during 2013–2016, all of the Armenia–Iran pipeline infrastructure was taken over by Gazprom, sparking bewilderment in Iran (Lragir.am, August 3, 2016).

Under Serzh Sargsyan’s rule, Armenian relations with Iran drifted toward gradual stagnation stemming from his government’s chronic difficulties with formulating a strategic vision for his country. Moreover, Yerevan’s inertia was combined with Tehran’s reluctance to irritate Moscow by encroaching on what Russia considers its zone of privileged interests. With Armenia’s accession to the EEU at the expense of prospective relations with the European Union, Yerevan found itself significantly constrained in its ability to pursue a diversified foreign policy. On the other hand, the nuclear deal the international community soon reached with Iran yielded a relatively favorable environment for Armenia (see Commentaries, August 7, 2015). Sargsyan’s regime thus started championing Armenia as a bridge between the EEU and Iran. However, the Iranian side showed somewhat less enthusiasm, considering this initiative more of a Russian than an Armenian idea. Conversely, Armenia’s continued attempts at euro-integration (see EDM, December 4, 2017) were tolerated by Tehran as it considered Yerevan a convenient “channel” for dealing with the West.

In those intervening years, Serzh Sargsyan’s succeeding prime ministers Tigran Sargsyan and Karen Karapetyan failed to carry out a series of joint projects with Iran—namely, the Iran–Armenia North-South highway and railway (see EDM, June 24, 2015). Part of the problem was their limited room for collaborating with Tehran, primarily due to a need to consider Russian interests. This behavior obviously irked the Iranians, who opted to expand Iran’s cooperation with Georgia and Azerbaijan (see EDM, November 9, 2017), so as not to be trapped by Russia’s zero-sum playbook while dealing with Armenia.

In private meetings, some Iranian diplomats admit that the Armenian “Velvet Revolution” to a certain degree engendered hope in Tehran that the new leadership in Yerevan might prefer to rehabilitate the atmosphere of strategic alignment in an effort to diversify Armenia’s stagnating foreign and security policies. Yet, Moscow is certain to view any such steps taken by Yerevan as threat to its preponderance in Armenia and to challenge these moves. Above all, however, the main obstacle Armenia’s post-revolutionary government may need to overcome in seeking closer ties with Iran is the predictable anger from Washington. To alleviate the negative consequences, Yerevan may try to take a proactive approach by initiating a genuine and transparent dialogue with Washington about its intentions to mitigate Russia’s malign influence while additionally seeking to regionally balance the Turkey-Azerbaijan alliance through a partial co-alignment with Iran.

Journalists, friends and the brewing revolution

The Revolution Will Not Be Postponed: What Does Pashinyan’s Resignation Really Mean?