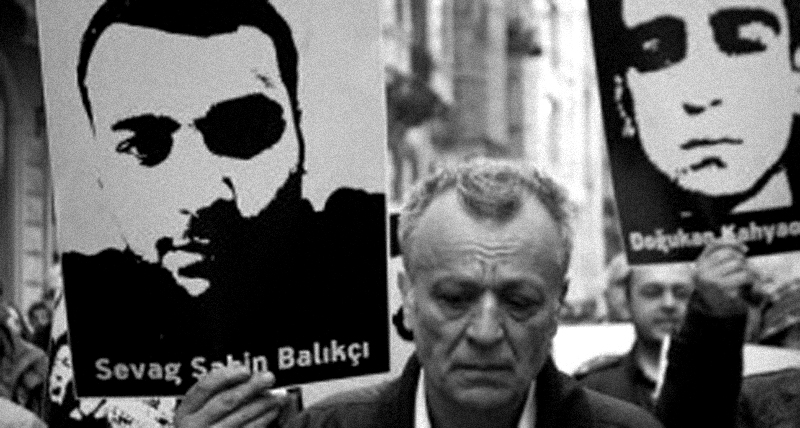 Garabed Balikci holds up a poster depicting his murdered son’s image in Istanbul.

In 2011, while serving in the Turkish armed forces, Armenian soldier Sevag Sahin Balikci was killed by a fellow serviceman on April 24, just a few weeks short of his release from the army.

The Diyarbakir Military court ruled that Sevag’s murder was not premeditated but an isolated incident and sentenced Kvanc Aghaoghlu, the serviceman who shot Sevag, to four years and five months in prison.

Sevag’s parents insisted his death wasn’t an accident, although the court ruled to the contrary. According to Ismail Cem Halavurt, the Balikci family lawyer, all available evidence and undisclosed information indicate that this was not an accident. In a conversation with Civilnet in 2014, Halavut pointed out that “the fact that the murder was not accidental is proven by numerous documents and information included in the court material. The fascist views of the killer, the Armenian nationality of the victim, and it coinciding on April 24th convinces us that the killing was not accidental.”

The Turkish-Armenian weekly Agos reports that a court trial that took place in the Turkish Batman province on December 16 sentenced Halil Ekshi to two years and one month imprisonment on the count of giving false evidence in regards to Sevag Balikci’s case. This happened after Sevag’s family objected to Halil Ekshi’s initial testimony and demanded that he re-testify. Ekshi, who was one of the witnesses to the murder, said that his preliminary testimony was influenced by Bulent Kaya, a fellow serviceman and another witness to Sevag’s murder, also a relative of Kvanc Aghaoghlu. The new court ruling also sentenced Bulent Kaya to 3 years and a month’s imprisonment.

Ismail Cem Halavurt believes there should be a harsher punishment for such a crime. “That is why we appealed the case and it is now being investigated by the Military Court of Cassation, if the latter approves the verdict of the Diyarbakir military court, the case will be closed. We will appeal to the Constitutional Court, if this proves futile, we will transfer it to the European Court of Human Rights,” says Halavut.

This is No Longer a Ceasefire, this is War