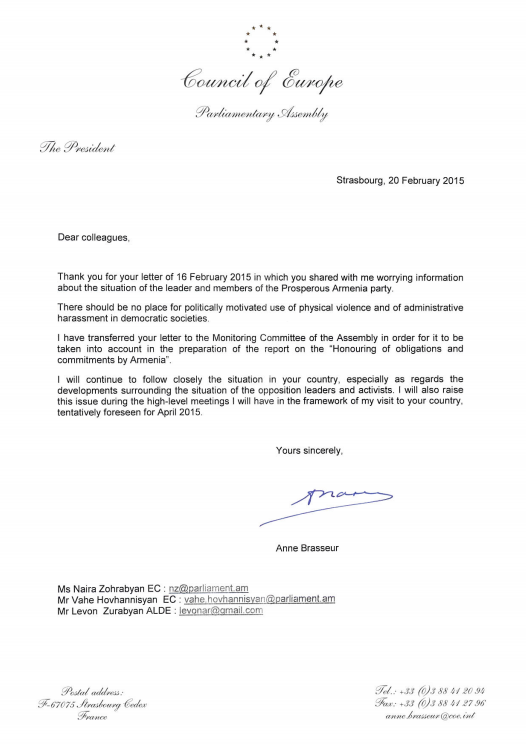 “What’s happening in Armenia is clearly political persecution and repression.” This is what was written in a letter dated February 16 and addressed to the President of the Parliamentary Assembly of the Council of Europe (PACE) Anne Brasseur by three members of Armenia’s National Assembly. Naira Zohrabyan and Vahe Hovhannisyan of the Prosperous Armenia Party and Levon Zurabyan of the Armenian National Congress told Brasseur that President Serzh Sargsyan had “declared all-out war against Armenia’s second largest political force, the Prosperous Armenia Party.” Two days after the letter was sent, Brasseur, on February 18, responded by saying, “There should be no place for politically motivated use of physical violence and of administrative harassment in democratic societies.”

On February 12, President Serzh Sargsyan delivered a speech during the Republican Party’s political council meeting, publicly humiliating and discrediting opposition leader Gagik Tsarukyan and threatening retribution for ‘alleged’ criminal activities. That speech set into motion a series of events that led to the almost near-decimation of one of the most powerful opposition parties in the country.

An anonymous source provided CivilNet with copies of those letters.

Below is the full text of the letter addressed to PACE President Anne Brasseur:

You may already be aware of the unexpected developments of the past two weeks in Armenia. On February 12, during the ruling Republican party’s Political Council meeting, the President of Armenia Serzh Sargsyan, who is also the Chairman of the ruling party, declared all-out war against Armenia’s second largest political force, the Prosperous Armenia Party.

Mr Sargsyan publicly avowed that he will do everything in his power to deny the Chairman of the Prosperous Armenia Party Mr Gagik Tsarukyan the right to engage in political activity. He immediately issued his first decree dismissing Mr Tsarukyan from the National Security Council of Armenia. The President also instructed the Chairman of the National Assembly to consider the issue of stripping Mr Tsarukyan from his parliamentary mandate. Furthermore, he ordered the Prime Minister to begin tax audits in all enterprises where Mr Tsarukyan has a stake. This is obvious political persecution; the reason is simple: Prosperous Armenia Party’s public refusal to support the constitutional  changes suggested by President Sargsyan, the sole aim of which is to prolong his grip on power for another 10 years.

Madam President, political harassment against the members of Prosperous Armenia Party have already begun. Last week, Mr Artak Khachatryan, a member of the Political Council of the Prosperous Armenia Party was kidnapped and brutally beaten. He was released after several hours. The person or persons responsible for this atrocious crime have not been uncovered. Soon, the ruling party, which has absolute majority in Parliament, will proceed to strip Mr Tsarukyan, the leader of the largest opposition party, of his parliamentary mandate, as ordered by the President.

What’s happening in Armenia is clearly political persecution and repression. Madam President, we hope and expect that as head of the Parliamentary Assembly of the Council of Europe, you will publicly react to these unprecedented events and developments in Armenia.

The situation is potentially explosive, and the right kind of rebuke and strong cautionary statements may prevent serious confrontation and turmoil.

Below is the full text of the letter received from PACE President Anne Brasseur, addressed to parliamentarians Naira Zohrabyan, Vahe Hovhannisyan and Levon Zurabyan: