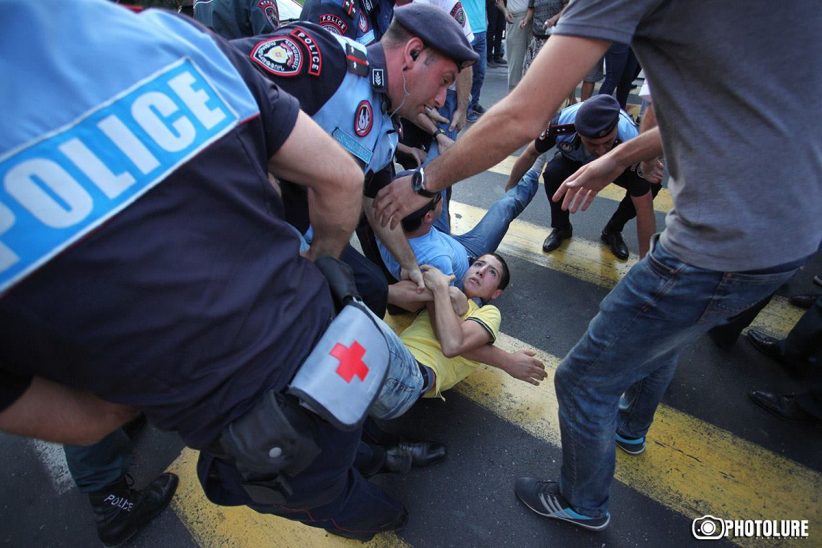 During the clashes, an elderly man was slapped by a police officer. The officer in question was led away by other security personnel.

Protesters were attempting to block Vazgen Sargsyan Street, which is adjacent to Republic Square. Deputy Police Chief Valeri Osipyan is now in the square where protesters are continuing to remain despite requests from police to clear the area.

The civic initiative is demanding that electricity rate hikes be clawed back and that members of the country’s Public Services Regulatory Commission resign.

When Armenia’s Public Services Regulatory Commission unanimously approved the electricity rate hike on June 17, it sparked nationwide protests. The Russian-managed Electric Network Armenia company had applied to the Commission to increase electricity tariffs due to a $250 million debt it had accrued. Critics of the company said it was due to poor governance and mismanagement.

On June 19, thousands of Armenian citizens gathered in Yerevan’s Liberty Square to continue protesting the electricity price hike. Among the organizers of the protest was the No to Plunder civic initiative. They announced that if their demands were not met in three days, they would take the protests to Baghramyan Avenue where the Presidential Palace is located.

At 19:00 on Monday June 22, after their requests were not met, thousands of protesters, many of them young people, began marching toward Baghramyan Avenue where they were met with riot police blocking the way to the Presidential Palace. Yerevan’s Deputy Police Chief Valeri Osipyan warned the protesters that their march was illegal and threatened to use force if they did not turn back.

In the early morning hours of June 23, at approximately 5:30am, riot police began moving towards the crowd, using water cannons against the peaceful protesters. Police officers dressed in civilian clothing used batons to drag people away from the scene and arrested hundreds of people. At least 25 people were taken to the hospital as a result of the violence, and 237 people were arrested -an unprecedented number in Yerevan. Journalists were also targeted and many of them had their equipment confiscated or damaged. Other reporters were detained by the police.

After several weeks of closing down Baghramyan Avenue, police cleared the street of demonstrators.

Reaching the Summit One Step at a Time