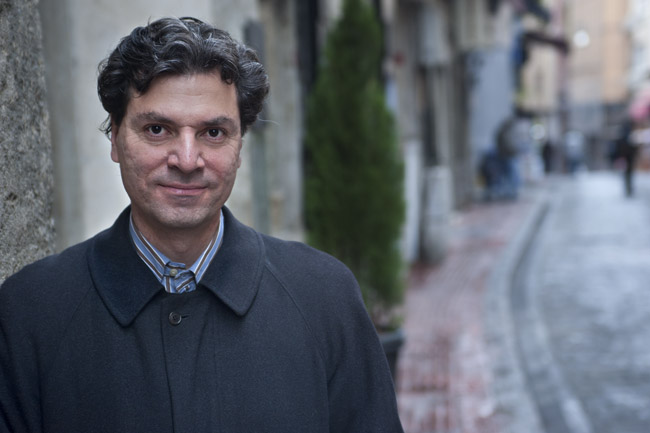 Below is the full transcript of the interview:

Maria Titizian: What motivated you to write this book?

Vicken Cheterian: The idea came from 2011. In fact it was my publisher in London, Michael Dwyre, who suggested that I write a book on the 1915 genocide for the centennial.

I told him that while there are a number of very good books that were recently written about the events during the First World War between 1915 and 1923 period, what was lacking was the consequences of the genocide later, the history of its denial and the impact of the denial of the Armenian Genocide on global political culture. So I wanted to investigate the question of what happens when there is a crime committed and the world pretends that it doesn’t happen? Does it fade away? Does it disappear? Or does it leave traces? I wanted to research those traces left behind.

MT: And you looked at both the Armenian experience and the Turkish experience, I presume?

VC: I didn’t distinguish between the Armenian and the Turkish experience I wanted to see what such a crime does to humanity in general. Victims, perpetrators, bystanders, does it have any impact? And of course we know that for the survivors of the genocide and their descendants it has a huge psychological impact.  What I was missing at the time was the impact it left behind for the survivors of the genocide in Turkey itself but also for the perpetrators. The impact of the genocide, the way it shaped the political culture in Turkey is incredible and this was kind of the big surprise of this research.

So I wanted to investigate the question of what happens when there is a crime committed and the world pretends that it doesn’t happen? Does it fade away? Does it disappear? Or does it leave traces?

MT: In the book you say that Turkey cannot move forward, that it cannot establish justice and democracy as long as it does not confront the sins of the past, and that the modern Turkish republic really has been formed because of the Armenian Genocide or on the ruins of the Armenian nation in the Ottoman Empire. Is that what you found in your study and examination of this?

VC: Yes, absolutely there is such a strong continuity between this huge crime committed back in the First World War and the political culture established later on. Because when we pretend that a crime is not a crime, it is a heroic act. Heroic act, that’s the qualification given to the criminals in Turkey.  What happens later is that the crime itself becomes legitimate and the political institution –the Turkish state in this case, which is behind this crime, does not shed away the instrument of the crime. The mechanism of the crime becomes legitimate and goes on functioning. When we look at the Turkish history once the Armenians were eliminated those who were left on the same land mainly the Kurds become the new minority and become the new victim of state policies. So one of the major legacies of the Armenian Genocide is that when we do not identify a crime as such then crime becomes both legitimate and an efficient instrument of conflict resolution. So we put aside other instruments diplomacy, policy, various other instruments of conflict resolution and we apply the instruments used during the genocide.  Deportations, massacres, repression, and denial of the identity of the other all those policies continued for decades in Turkey.

MT: It’s an incredible narrative, the continuation of that. Talk to me if you will what Hrant Dink, his life and his death, what did it mean for consciousness in Turkey about confronting history

But what marks Hrant Dink’s assassination is the funeral and 100,000 people walking and saying “we are all Hrant Dink” and “we are all Armenian.”

This was a revolution in the Turkish public opinion in its consciousness.Hrant was the first Armenian who claimed public space in Turkey, since 1915 in fact, and he was assassinated for that. He was assassinated because he dared to talk. What Hrant was trying to do was to create a dialogue with the average Turk, with the Turkish public opinion talking to his consciousness and saying listen brother, in your village or neighborhood 100 or 90 years ago there were Armenians, there were churches there were schools. They are not here now what happened to them?

And I feel like large sectors of Turkish intellectuals feel very responsible. Because when Hrant was under threat they didn’t realize that Hrant was different. They thought this was yet another pressure from the state on pro reform intellectuals. But there was one point which distinguished Hrant from the others. It was the fact that he was Armenian

MT: In talking with some of our Turkish colleagues and when we have traveled to Istanbul we will hear from Turkish civil society and from Turks that life for them changed after Hrant’s assassination. That there was this fundamental shift. And in your book I believe you look at that 100-year period of almost neurotic obsession for the Armenians when it comes to genocide and then the Turkish state’s neurotic obsession with denying it. We are now in the 100th year, the centenary of the Armenian Genocide on April 24 the world, Armenia, will be commemorating it. A variety of events taking place, commemorations. What is going to happen on April 25?

VC:  I think first all of us will feel a huge fatigue, emotionally and physically. To work on a genocide is very demanding and it’s very tiresome. It puts us in front of fundamental questions, existential questions. And on April 26 what we have to do is we have to go on working on this, because humanity until now did not make the conclusions necessary from this experience. And our message should be that all of us, humanity in general, not just Armenians, have paid a huge price for ignoring the first holocaust of the 20th century, the holocaust that took place during the first world war. And for this ignorance, for closing our eyes, humanity has degraded its political culture and accepted levels of violence unseen in past centuries. We have to correct this. And we as Armenians have this responsibility to go on reminding the world of its responsibility.

MT: The perfect message especially this year about the responsibility as human beings as citizens of the world not just for the Armenian nation itself. Final question — what did it mean for you to write this book? How important was it for you to say what you needed to say with this work?

VC: To be honest I am not someone who has worked a lot on the Armenian Genocide in the past. Simply thinking about the subject of simply reading books was so painful that I tried to avoid it. But in 2011 I started working on this because I was encouraged by the fact that a number of Turkish intellectuals were already working on it. So it stopped being the pain of my people, of the Armenians, it became something bigger than that.

But the second lesson I learned was by researching on 1915 and its meaning, I discovered that we had such a huge civilization throughout the Ottoman Empire which disappeared, which was destroyed. And we have also the responsibility to go beyond 1915, to go beyond the genocide and to rediscover the incredible civilization our grandfathers and grandmothers were building on various localities in the Ottoman Empire and to value it again.

MT: What wonderful sentiments and beautiful words that should be the banner for Armenians in the coming century to really appreciate the civilization that existed and to rebuild once again past the 100th anniversary.

Reactions to European Parliament’s Resolution on the Armenian Genocide

Route Your Roots: Mapping the Deportations