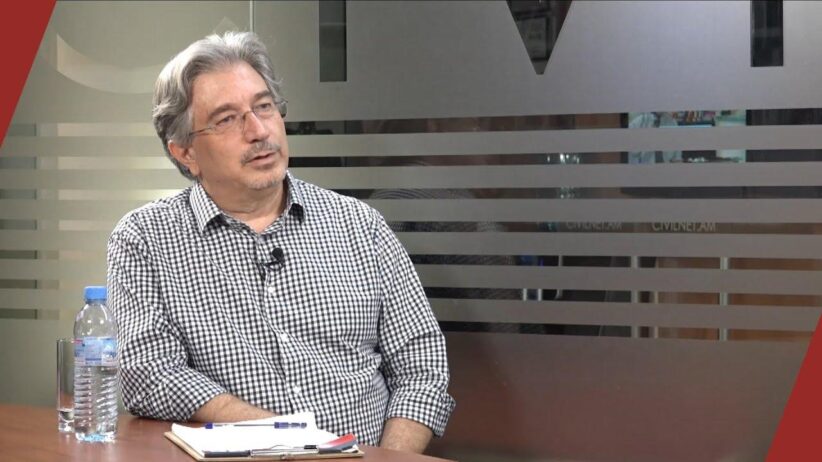 U.S. Political consultant Eric Hacopian gave his take on what the end of the 2020 Karabakh war means for Armenia and Armenians, as well as what steps should now be taken, and what is the current situation within Armenia. Below is the transcript of the interview.

Welcome, we’re joined by Eric Hacopian, a consultant in American politics. We’ll be discussing the end of the 2020 Karabakh war and what this means for Armenia and Armenians. Eric, thank you very much for your time. So, what is the situation, what has happened and I’ve also like to ask specifically, what happened last night in Yerevan that saw the Parliament and government buildings ransacked?

Well, obviously there is a tremendous amount of anger, confusion about this agreement, even though we know most of what the agreement is, but not everything about the agreement. Some of those scenes were frankly quite ugly, and I think it was a combination of real anger from real people, and then I think it was taken advantage of by, to be kind, a group of opportunists and thugs, who … What was interesting about them is you have all of these people who are essentially saying the war should continue, and they are all young fit guys who were good enough to tear the whole Parliament apart, but they somehow never went to the front, if they really want the war to go on. So I think, some of it was that the public anger and confusion is real, but it was obvious that some political forces were trying to take advantage of that and use that for their benefit and trying to hurt the current government.

And with the 2020 war and now this subsequent peace agreement, what have we learnt as Armenians?

Well, let’s take one step back. I think, there’s two things that we need to study. The first thing is we need to admit defeat, and we need to learn from it. We need to understand what brought us to this moment, what caused the defeat to what extent all of us were responsible on some level, even obviously there’s other people who are responsible a lot more than others. I think first we need to face that, before we can move on. We shouldn’t be pollyannaish about this, we need to admit what happened was a calamity and a defeat, it’s not the end of the world but we need to be realistic about it and learn from it.

The second thing, and that’s the negative ledger. I think in the positive ledger, it’s more factual than positive is, we need to be eternally grateful as a nation and as a people for this fantastic effort that was put by this army that was outgunned, outnumbered, out-everythinged, for 43 days, and essentially by their heroism and their very valuable lives prevented a complete ethinic cleansing and genocide in Karabakh. So we need to be forever grateful for them, and as a people, we need to do everything we can to help their families and be forever grateful to them.

I think one thing that I’ve noticed in my conversations with people is I think since the government was always very positive about “Haghtelu enk, Haghtelu enk,” people never really understood what we were up against. Armenia was fighting 6 or 7 countries in different forces. You had thousands of Turkish special forces there, you have Azerbaijan itself that has an army twice the size of ours, you had massive elements of mercenaries and terrorists brought in by Turkey from Syria and other places. There have been reports of Pakistani special forces or Afghans that were brought in.

So people need to understand that what our guys were fighting was not Azerbaijan.

The closest analogy to this, historical analogy, a recent one is really the 1940 Soviet invasion of Finland, in which the Finns who were supposed to be defeated in a couple of days held out for a month or two, and by doing so they preserved their independence despite the fact that they lost some territory.

Armenia was taking on the combined powers of 90-100 million people. And that kind of imbalance cannot go on forever. We know from reports about military attaches that the initial plan for this war was supposed to be finished in 3-5 days. And that’s what everybody thought, in 3-5 days they would have caught across the south, gone up north, which is what happened, get to Shushi, and then the other group would have gone into Kapan, and that would have been a checkmate. Except that 3-5 days turned into 43 days, and in that process by the heroism of these fantastic young people that we have, they saved us from calamity.

So those are the two primary things that we need to acknowledge first. But what did we learn from it, I just want to give some background: These are the things we learned from it, that the most important thing for us from this point on and has been in the past, is to create an Armenia that is democratic, prosperous and just. Because everything else we want to do stems from that. Because if we don’t have that, nothing else matters.

The second thing is what we learned is that corruption kills. The corruption of the past 20 years, you know, our drones were in the houses of the oligarchs, our air defenses were in their bank accounts in Switzerland. That’s reality, we have to be cognitive of that and understand that and move on.

The other thing is, visionless or mediocre diplomacy kills. We had diplomats without any vision who essentially left this country alone and stranded when this crisis started. The other thing is, Azerbaijan has friends in the world, we simply have acquaintances. They have friends that come through, ours just send us really nice words for the most part. That made a huge difference, as we know, on the last 43 days.

And the most important thing that we should learn, is that we should never ever send our guys into battle without the most modern equipment that we can buy, even if we need to borrow money to do it. We cannot rely on using 19th century bravery and 20th century weapons to fight 21st century wars. It doesn’t work. It can only take you so far. We as a collective, have to pledge that our fighting men and women will never ever go into battle without having the latest most modern equipment to defend themselves and to win the war.

Well, it’s a calamitous moment in so many ways. I mean, and I don’t want to exaggerate, but I mean it’s close to what happened in the start of the last century on the negative ledger. And we have to look at it in those terms, because let’s be honest, the purpose and the mission of the other side was ethnic cleansing and genocide. That’s never been not on the table. We all know that. So, 100 years, 105 years after the first genocide, we were actually looking at a  serious chance of a second one. But having said that, by having a state and by having enough of a wherewithal, we prevented the worse from happening. And I don’t want to downplay that. We need to understand that and appreciate that. There’s a reason that what happened to the Yazidis isn’t happening to us, is because we have a state and the ability to defend ourselves. Maybe not as much as we wanted to, but we have the ability to fight and prevent the worst from happening. So those are the two things that I would say

And is there anything else you would like to finally add?

I think we have to look at what it is that we need to do from this point on. I think I would say there’s two things: we need to prepare for war and we need to prepare for peace. It’s not out of the question that this agreement that is done holds for the next 50 years. There’s plenty of examples of it, Cyprus and other places, that for different reasons the parties don’t want to start another war. However, the way this agreement is written, in 5 years the peacekeepers can be asked to leave. And if the peacekeepers leave, that’s almost a definitive signal for another war, if any party asks for that, because why would you ask them to leave otherwise.

So we need to prepare for what could come, and be prepared for it, and the way you prepare for it, is we need to look at a development model of what I call a garrison state, where we need to create our own military industrial complex. I know that sounds very highfalutin for a country as small or not affluent as Armenia, but the truth is in modern warfare, with all these new drones and other things going on, none of these things are exceptionally expensive, and they’re not really that hard to do. We have plenty of Armenians around the world with money who can and should invest in that. So I think we need to create this garrison state model, where we use the fact that we should always be ready for war as a way to develop your economy.

I think on the other ledger, what I call the peace ledger, we need to have a concerted effort to use the way Azerbaijan conducted the war, against them as the absolute proof why we need remedial cessation and recognition of Artsakh. Because there’s no more excuses, there’s no more refugees, no more land to give back.

The issue now is does Azerbaijan have the right to rule the people of Artskah who’ve been independent for 30 years, have run themselves and who, Azerbaijan in this war proved, whose intentions towards were genocidal and criminal. Azerbaijan, by the way, proved in this war that it shouldn’t even be running its own people, much less people from other ethnicities. Just the way, the pitiful way that they handled their own soldiers and what happens to them when they’re injured.

So I think, as a collective, we need to have this push on the one side which is focus on economic development and creating this garrison state, while at the same time be very aggressive and try to get recognition for Artsakh, and by prosecuting Azerbaijan for the way it conducted the war in the criminal manner, because that’s the prima facie of evidence that they should have not only legal, but no moral right to rule the people of Artsakh.

Eric, thank you as always, and thank you for joining us on CivilNet.