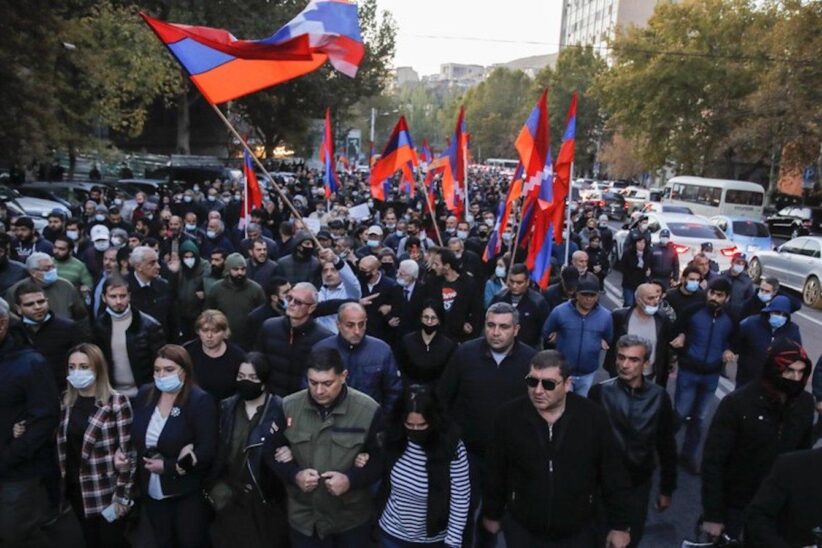 Armenian Prime Minister Nikol Pashinyan says that while there are constant rumors about his resignation, he does not plan to step down unless that’s the will of the Armenian people, majority of which he doesn’t believe want him out of office.

In recent weeks, institutions throughout Armenia and the Diaspora, including the Armenian president, the Church, academic institutions, and most political parties, have called for his resignation.

Pashinyan’s My Step Alliance is a parliamentary majority, while most of the current opposition does not currently hold seats.

Opposition protests on the streets of Yerevan, which began on the day that Pashinyan signed the trilateral “end of war” agreement, are also growing continuously. A significant increase in the number of protestors was seen on Monday as demonstrators marched from Yerevan’s Komitas neighborhood to the Republic Square, and to the Holy Mother of God Kathoghike Church.

Protestors flooded the streets of Yerevan, creating widespread traffic throughout the city.

Opposition groups said they will continue the rallies throughout the week until Pashinyan resigns.

The increase in the number of protesters coincided with the renewed Azerbaijani aggression in Karabakh, which ended with Azerbaijan  advancing towards the Armenian held villages of Khtsaberd and Hin Tagher.