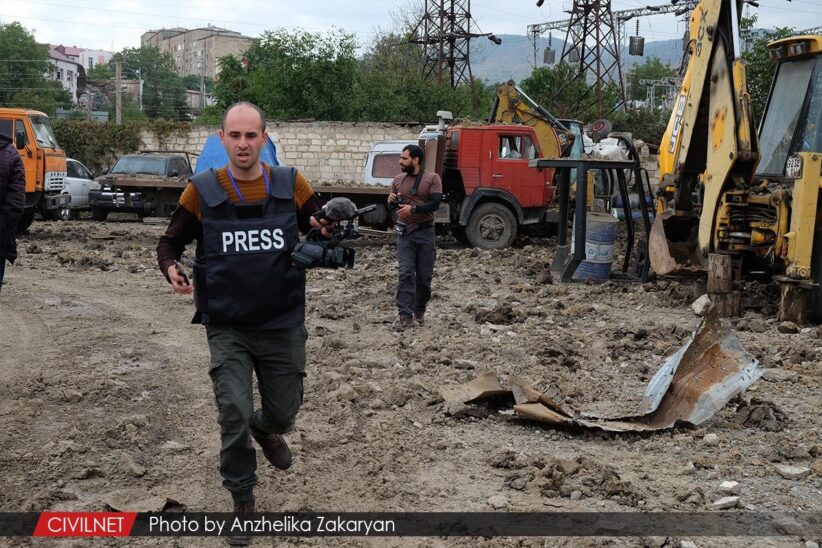 Artak Beglaryan and Arman Tatoyan, human rights ombudsmen for Artsakh and Armenia, respectively, have issued a report on foreign media coverage of the Karabakh fighting between September 27 and November 10, 2020.

According to the report 390 reporters from 90 different countries covered the fighting from the Armenian side. Some of these reporters came under attack from the Azerbaijani side, with seven seriously injured and one local fixer killed. Azerbaijani authorities also filed criminal charges against Russian war correspondent Semyon Pegov, who was embedded with Armenian forces through most of the war. Other journalists were blacklisted for visiting Artsakh without Azerbaijan’s permission, as has been Azerbaijan’s policy for years.

Some of the more serious incidents with media included:

On October 1, a group of international and Armenian media were shelled in the town of Martuni. As a result, two French journalists for Le Monde, a journalist for 24News.am and a cameraman for Armenia TV were injured, and a local fixer was killed. Journalists for Agence France Presse and Russia’s Dozhd TV also came under attacked, but avoided injuries. The injured journalists were evacuated to Yerevan, and the French government subsequently sent a plane to take the Le Monde journalists back to France.

On October 2, a media van was shelled near the town of Mardakert, in Karabakh’s northeast. While the van was seriously damaged, the attack did not cause injuries.

On October 4, as a result of repeat attacks on journalists, Artsakh authorities relocated the foreign media center to Goris, in the Republic of Armenia. Journalists who chose to stay in Artsakh were free to do so.

On October 8, Turkish and/or Azerbaijani air forces launched precision-guided missiles at the Armenian cathedral of Shushi causing significant damage to the building. During the second attack, two Russian journalists were injured. One of the journalists Yuri Kotenok remains hospitalized in Yerevan for over two months.

According to the report the attacks were conducted with the help of reconnaissance drones and were part of the deliberate effort to keep foreign media out of Artsakh. At the same time, Azerbaijani authorities largely forbid foreign media access to its side of the frontline, making exceptions for a few Turkish journalists. Foreign journalists allowed into Azerbaijan were restricted in their coverage by government minders accompanying them.

This piece originally appeared in Focus on Karabakh.