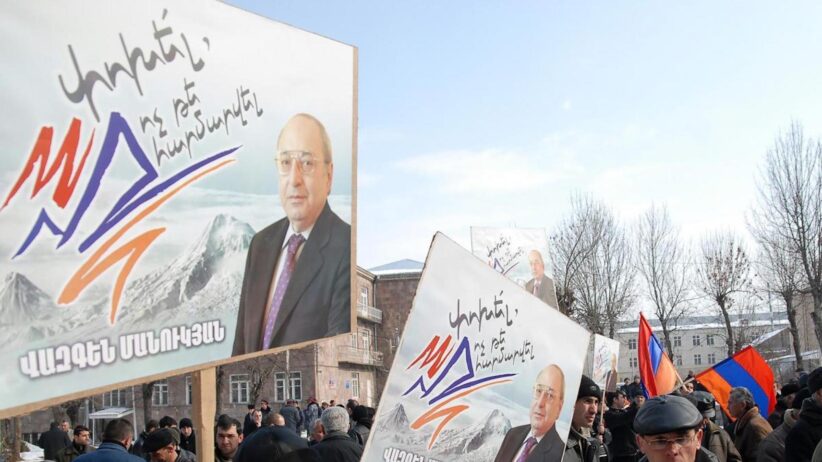 Vazgen Manukyan has been involved in Armenia’s politics since 1988. Back then, the rallying place of the Armenian people was Yerevan’s Freedom Square, near the opera.

Manukyan was born in Gyumri; he is almost 75.

Most prominently, he is known as the coordinator of the Armenia Organizing Committee of the Karabakh Movement. The leaders of the Movement used to gather in his family home to discuss the Artsakh issue and the future of Armenia.

On March 19, 1988, the Organizing Committee of the Karabakh Movement issued its first statement in the form of an eight-point leaflet authored by Manukyan. Most notable was the fifth point, which expressed the foreign policy views of Armenia as seen by Manukyan, his then-thought partner Levon Ter-Petrossian, and Rafael Ishkanyan, the linguist, historian,  academician, and Manukyan’s father-in-law.

Manukyan was referring to Turkey as the permanent enemy and Russia as the permanent friend. He was in favor of establishing relations with Turkey, and considered Pan-Turkism a theoretical threat.

At that time, Manukyan represented the national-democratic strain of the multi-layered Armenian National Movement Party, which was Armenia’s first post-Soviet political party, and the institutional offshoot of the Karabakh Movement.

From prime minister to opposition

On August 13, 1990, Manukyan, one of the lead figures of the Pan-Armenian National Movement Party, was elected Armenia’s prime minister by the Armenian Supreme Soviet (or parliament). When the party nominated Levon-Ter Petrossian for the position of the first president of Armenia, Manukyan resigned, left the party with his supporters, and created the National Democratic Union Party. With this move, he took on the role of opposition to President Levon Ter-Petrossian’s government.

Manukyan himself did not participate in the election, which, with 83% of the votes, ended in a landslide victory for Ter-Petrossian. Since that date, no presidential candidate and no party has ever come close to earning 83% of the vote.

During the most difficult period of the first Karabakh / Artsakh War, when in the summer of 1992, Armenian forces lost a third of the Nagorno Karabakh Autonomous Region, Manukyan’s party, together with the Armenian Revolutionary Federation and a number of other political forces,  held large rallies in Yerevan’s Freedom Square, demanding Ter-Petrossian’s resignation.

Despite this, in the fall of 1993, Ter-Petrossian appointed Manukyan as Armenia’s Acting Minister of Defense and State Minister for Coordination of Defense Issues. He remained in that position for a year, which coincided with an Armenian victory in the Artsakh War. And Manukyan’s role here should not be understated.

In 1995, Manukyan’s National Democratic Union participated in the parliamentary elections and took fourth place with 7.5% of the votes.

September 1996 became Vazgen Manukyan’s shining hour. In Armenia’s second presidential election, he ran against incumbent Levon Ter-Petrossian and received more than 41 percent of the vote. No other opposition leader in Armenia’s history has managed to receive so many votes. Nonetheless, Ter-Petrossian won the election with 51% of the vote. A portion of Armenia’s public, including Manukyan’s supporters, hold to the conviction that those elections were rigged.

Following the election, Vazgen Manukyan and his supporters attacked the National Assembly building, which at that time housed the Central Electoral Commission. Parliament Speaker Babken Ararktsyan and his deputy Ara Sahakyan were seriously injured. Authorities also used force, beating a number of opposition figures near the podium.

Nevertheless, 1996 was memorable in that a broad alliance was formed around Vazgen Manukyan.

In the next (special) presidential election, which occurred following Ter-Petrossian’s resignation in February of 1998, Manukyan received around 12 percent of the votes. Robert Kocharyan and Karen Demirchyan received enough to move on to the second round.

In the 2003 presidential election, Vazgen Manukyan received less than 1% of the vote.

In 2008, Manukyan ran for the fourth time in the presidential election, receiving 1.3 percent of the vote. In that election, Manukyan was not so much promoting his candidacy as criticizing Levon Ter-Petrossian, who after ten silent years returned to the political arena to challenge Robert Kocharyan and Serzh Sargsyan.

After the 2008 election, Manukyan appeared to reconcile with the newly-elected Serzh Sargsyan and his government, and was appointed chairman of a newly-created  Public Council, a consultative body within the Ministry of Justice, entrusted with listening to different social groups and promoting consolidation of civil society in the country. He remained in that position for 10 years.

Today, Manukyan is attempting to become head of an interim government in Armenia.

In a recent rally, he made several harsh statements that contained elements of violence towards Prime Minister Nikol Pashinyan. In particular, he noted that, “The enraged people will ravage [Pashinyan]. He must leave. And if he does not leave voluntarily, he will leave by force.”

The following statement was even more surprising: “A great force will gather against Turkey, the world will not forgive Turkey for its impudence. If an alliance is formed against Turkey, we are in that alliance.”

Such an interpretation seems normal for the average Armenian, but not for Manukyan, who in September 1988 announced: “Armenia can live in peace with all four of its immediate neighbors – Turkey, Iran, Georgia and Azerbaijan. Armenians do not need mediators. If there are issues with those neighbors, we will solve them if we are able to, if not, we will remain silent. But the possibility of living in peace and harmony with all neighbors should not be ruled out. We have convinced ourselves, as Russia has, that we can not live without Russia, and Russia does whatever it wants with us. This evil is at the heart of our relations with Russia. All our losses are due to that.”

Also Read: What I saw at Yerablour Yesterday – Honor and Damnation