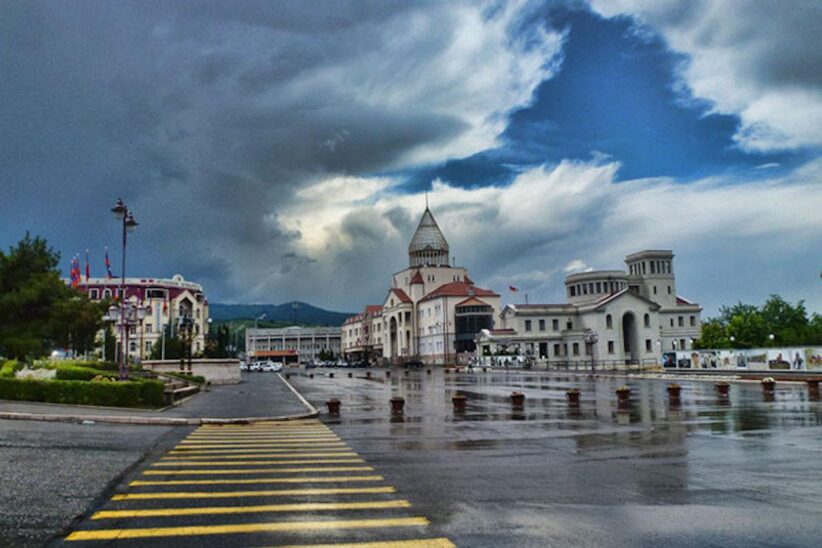 “These visits must be stopped. If such provocative steps are taken, we warn that Armenia will regret much more,” said Aliyev, referring to Armenian Foreign Minister Ara Ayvazyan’s recent visit to Karabakh for meetings.

Aliyev noted that Azerbaijan had notified Russian peacekeeping troops stationed in the region that no foreign citizen can enter the region without permission from Azerbaijan.

“The illegal visit of the Armenian Foreign Minister Ara Ayvazyan to the Karabakh region of Azerbaijan, where he met with representatives of the puppet regime and signed the ‘documents,’ contradicts the trilateral statement of Nov. 10 and does not comply at all with the framework of peace, security and cooperation in the region after the cessation of hostilities,” said Leyla Abdullayeva, head of the Press Service Department of Azerbaijan’s Ministry of Foreign Affairs, in a statement.

In response, Anna Naghdalyan, spokeswoman for Armenia’s Foreign Ministry, said the allegations that the visit is a breach of the November 9 “end of war” statement are “completely baseless.”

The “end of war” statement was signed between Armenian, Azerbaijani, and Russian leaders to end the 44-day war in Karabakh that began on September 27.

“The November 9 statement does not impose any restrictions on different levels of relations between Armenia and Artsakh [Karabakh]. The November 9 trilateral statement aimed at establishing a ceasefire and deploying Russian peacekeepers in Artsakh does not indicate any agreement on Artsakh’s status,” noted Armenian Foreign Ministry Spokeswoman Naghdalyan, continuing that, “The status of Artsakh should be determined as a result of a peace process based on the principles proposed by the OSCE Minsk Group Co-Chairs and the right of peoples to self-determination.”

Naghdalyan added that it is in fact the Azerbaijani side that has violated and continues to violate a number of key provisions of the trilateral statement.

“According to the first point of the trilateral statement, the parties must remain in the positions they were in on November 10 and end the hostilities. Meanwhile, more than a month after the ceasefire was established, the Azerbaijani side carried out military operations in the direction of the Old Tagher-Khtsaberd communities in the Hadrut region of Artsakh, causing human losses and capturing Armenian servicemen. To date, the Azerbaijani side has not fully complied with Article 8 of the trilateral statement, according to which prisoners of war, hostages and other detainees should be exchanged,” Naghdalyan concluded.

Also Watch: The Danger of Mediocrity – The Future of Education in Armenia