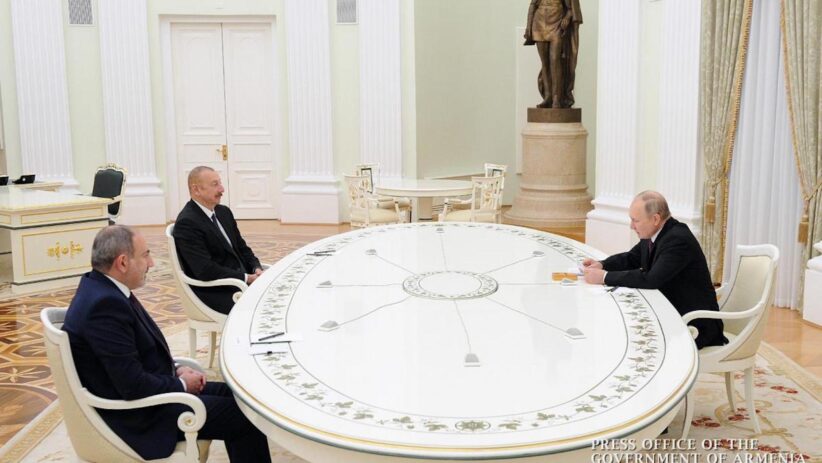 The following is an English translation of the joint statement signed by Armenian Prime Minister Nikol Pashinyan, Russian President Vladimir Putin and Azerbaijani President Ilham Aliyev in Moscow on January 11, 2021. This is the second statement signed by the three leaders after the end of the Second Karabakh War. The first trilateral statement, signed on November 9, 2020, is available here: 9 Points Signed by Aliyev, Pashinyan, Putin on Karabakh

1. For the purpose of implementing the 9th point of the November 9, 2020 statement, which refers to the unblocking of all economic and transport links in the region, we support Russian Federation President V.V. Putin’s proposal to create a trilateral Working Group under the joint chairmanship of the Deputy Prime Ministers of the Republic of Armenia, the Russian Federation and the Republic of Azerbaijan.

2. The Working Group will hold its first meeting before January 30, 2021, based on which it will list the main areas of work that are needed for the implementation of the statement’s 9th point. Rail and road connections will be prioritized. Other areas agreed by the Republic of Azerbaijan, the Republic of Armenia and the Russian Federation (hereinafter referred to as the “Parties”) will be defined.

3. In order to implement the activities, the Co-Chairs of the Working Group will approve the creation of area-specific expert subgroups, which will include representatives from Parties’ authorized bodies and officials from organizations. Within one month after the meeting of the Working Group, in order to implement and receive approval at the highest level by the Parties, the expert subgroups will submit a list of projects that will include the necessary resources and measures.

What Lists of the Armenian Dead Tell Us About the War