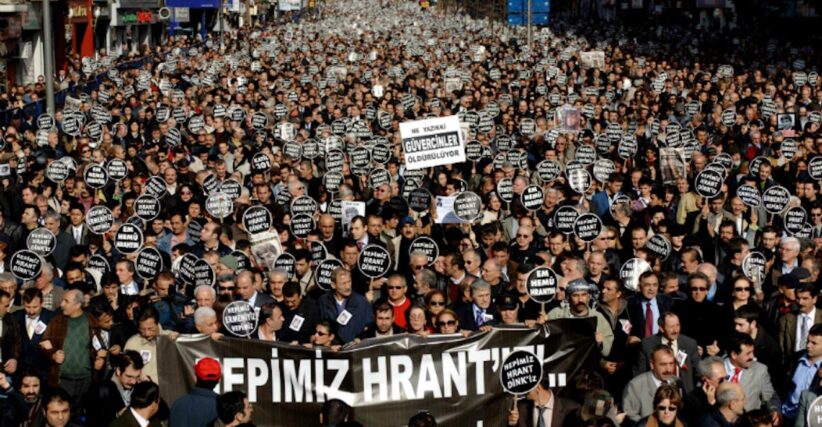 On January 19, 2021, the Hrant Dink Foundation commemorated the 14th anniversary of the assassination of Hrant Dink. The commemoration ceremony, usually held in-person in front of the Sebat Building in Istanbul, which formerly housed the office of the Agos newspaper, was broadcasted live online due to the pandemic.

Hrant Dink was born in Malatya, Turkey, on September 15, 1954. His father relocated the family to Istanbul when Hrant was just five. At the age of seven, Dink’s parents separated, and his grandmother placed Dink and his two brothers in the Gedikpaşa Armenian Orphanage. During the summers, the boys would attend the Tuzla Armenian Children’s Camp, where he met and grew up with his future wife, Rakel Yagbasan. During the 1980s, Dink and his wife took over the management of the Tuzla Children’s Camp. The camp was eventually seized by the government as part of a larger campaign of extrajudicial expropriation of minority properties.

Hrant Dink went on to study zoology and philosophy at Istanbul University but quickly abandoned his aspired profession in order to engage in Turkey’s democratization process. In April of 1996, he began publishing the Agos newspaper, which became the first weekly newspaper published in Istanbul in both Turkish and Armenian languages. Dink served as the editor-in-chief of the newspaper until the time of his assassination. For him, Agos was an avenue to combat the widespread hatred and discrimination targeted towards Turkish-Armenians. It was also a means to strengthen the bonds between Armenian-speaking and non-Armenian speaking Turkish-Armenian communities. Additionally, the newspaper intended to bring Armenian culture and history to light within Turkey and to bring to light Armenian-centered issues.

Dink brought many controversial topics to light, such as normalizing relations between Turkey and Armenia, speaking out about the Armenian Genocide, and advocating for minority rights in Turkey. The main focus of Dink’s speeches revolved around democratization in Turkey and the creation of an equal society amongst all Turkish residents.

His outspokenness, however, did not go unpunished. Dink was prosecuted three times for denigrating Turkishness, per Article 301 of the Turkish Penal Code. He was convicted once and received a six month suspended sentence. At the time of his assassination, he was being prosecuted a third time for denigrating Turkishness. In addition to state prosecutions, nationalist groups within the country also became dissatisfied with Dink’s ability to attract wide attention for minority issues, and for his outspokenness about the genocide. Death threats began to accumulate, but the Turkish government made no effort to ensure Dink’s safety.

Hrant Dink was assassinated in Istanbul on January 19, 2007, in front of the Agos newspaper office. The murderer, Ogün Samast, was a 17-year-old Turkish nationalist who shot Dink three times.

The assassination fueled massive protests throughout Turkey. Over 100,000 Armenians, Kurds, and Turks marched for Dink’s funeral procession and chanted, “We are all Armenians.” Every year, thousands of protestors gather in front of the Sebat Building to commemorate Dink’s life and demand justice.

There has been conclusive evidence found against the police, the gendarmerie, and other groups who knew about the plot to assassinate Hrant Dink. The case began in 2007 following the assassination and is still ongoing today, 14 years later. Yet, until today, there has not been any serious investigation or prosecution of those who made Dink a target or threatened his life. The teenage killer was imprisoned, but the rest of those responsible for his death threats and murder have gone unpunished. The Turkish government and judicial system have made the prosecution very difficult and have even blocked the Turkish National Intelligence Agency from giving vital testimony.

Hrant Dink became immortalized as the spokesperson for not just the Armenian but all minority communities in Turkey. For him, the Armenian issue in Turkey was a stepping stone to greater issues.