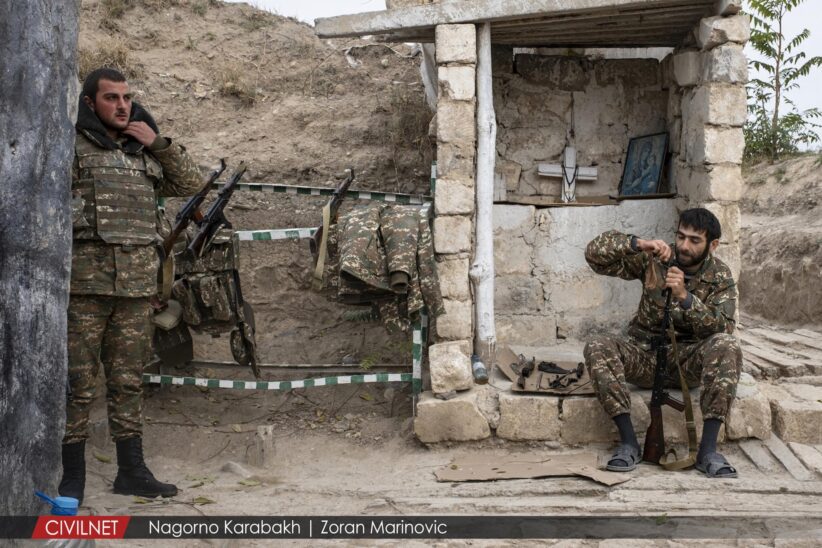 Onik Gasparyan, Chief of Staff of Armenian Armed Forces, has released a statement following the “end of war” statement signed by Armenia, Azerbaijan, and Russia that saw the loss of large parts of Karabakh territory.

His full statement has been translated into English.

“Dear compatriots, comrades-in-arms. Starting on September 27, the Armenian armed forces took upon themselves the blow of the war launched by Azerbaijan, its ally Turkey and terrorist-mercenaries, and from the very first minutes on did everything possible and impossible in their power. The Armenian soldier gave a selfless fight for life and death.

Some politicians have voiced accusations that the leadership of the Armed Forces presented the head of the government with an unrealistic analysis of the likely nature of the adversary’s actions and its military capabilities. This is not consistent with the reality.

Also Read: Russian peacekeeping officer wounded in a mine explosion in Karabakh

I was appointed Chief of the General Staff of the Armed Forces on June 8 of this year and already on June 12 presented to the Prime Minister of Armenia, and a few days later to the Security Council, an analysis of the military-political situation in the region and the capabilities of our Armed Forces.

Based on the analysis, I made proposals to improve the level of military security in the country. In particular, I noted that:

Our adversary is no longer solely Azerbaijan, but also Turkey. Consequently, Armenia cannot effectively resist the combined military potential of these states, and it is necessary to apply all the political and diplomatic potential to avoid or at least postpone a war.

The proposal was accepted by the Security Council and the Prime Minister, but the question was asked: “And if the war cannot be avoided, what should be done?” I replied that if the war is imposed on us, we should try to inflict heavy losses on the enemy as soon as possible and force it to abandon further actions. I pointed out that we must avoid a protracted war, given the availability of our resources. Numerous proposals were discussed and approved, the implementation of which was supposed to significantly increase our combat potential. This concerned both the acquisition of weapons and military equipment, and the all-round support of combat operations.

Then the question was raised about the formation of a hundred thousand member home guard militia. Nevertheless, we did not manage to avoid the war, and on September 27 the enemy launched an offensive  with vastly exceeding forces along the entire front in Artsakh. The Defense Army successfully repelled all these attacks, inflicting heavy losses, destroying a large number of manpower and military equipment. Unfortunately, our troops also incurred heavy losses.

On the fourth day of the war, during the meeting of the Security Council, I presented our losses and the assessment of the Armed Forces on the situation, noting that measures must be taken to end the war in two or three days. Otherwise, in conditions of such intense military operations, our resources will be depleted shortly, and with every passing day we will have more unfavorable conditions for the negotiation process.

I have repeatedly presented similar assessments during my round-the-clock work with the prime minister, as well as at the meetings of the Security Council.

All attempts and proposals to halt the war at a certain stage were rejected by Turkey and Azerbaijan, and we were forced to continue the military operations, trying to inflict heavy losses upon the enemy and force it to come around to the negotiating table.

For all of us, the agreement with the harsh terms was truly adopted as a result of a comprehensive assessment of the situation. We had to choose between a very bad situation and a tragedy. We chose the very bad.

That day was the worst day of my life, a personal tragedy for me.

But, the realization that as a result of this decision, we managed to preserve most of Artsakh and the main military capabilities of the Defense Army, suggests that we have no right to fall into depression, we must unite, swiftly recover and be ready to continue the struggle.

I bow my head in memory of all the fallen and before their families. A very cruel war was imposed on us, and in the unequal struggle the Armenian soldiers and officers showed the highest moral and volitional qualities and the determination to fight to the end.

It was a real heroic battle, a battle for survival. The Armenian nation can be proud of its soldiers, officers and generals.

We must not despair and must continue to defend the borders of our homeland, seriously analyze, draw conclusions, and, while restoring the Armenian army, increase its combat capability.

Thank you for your selfless service. With a high level of consciousness and responsibility, we will fulfill the combat tasks assigned to us, with our unity and unshakability of our will, let us be worthy of comrades’ and martyrs’ dedication.”

Is the West Losing Armenia?