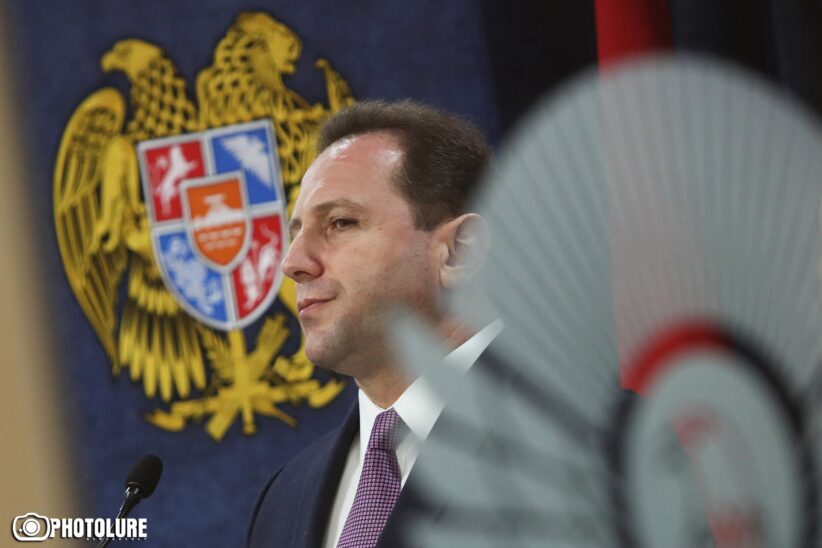 Armenia’s Defense Minister Davit Tonoyan has been dismissed from his position in the fallout after  Armenian defeat in the war over Nagorno-Karabakh.

Tonoyan was appointed to the position of defense minister in May 2018, right after the Velvet Revolution in Armenia. He previously had served as Deputy Defense Minister.

Tonoyan will be replaced by Prime Minister’s adviser Vagharshak Harutyunyan, who served as Armenia’s Defense Minister in 1999-2000.

In his farewell address Tonoyan said that he is prepared to “bear his share of the responsibility” for the defeat in the Karabakh war. He also spoke of the unrealized vision and incomplete body of work he leaves behind.

Tonoyan expressed regret for his role leading to the Second Artsakh War. He also expressed hope that he had some modest role in the development and improvement of Armenia’s defense system throughout his tenure.

“I think some areas need to be revisited where I was unable to implement some of our concepts and goals, and in this regard I am ready to bear my share of responsibility.”

Tonoyan closed his address by stating that while difficult for him to resign at the moment, “the current situation needs to be eased. And I want my departure to be seen in that light”.  His final words:  “I bow to the memory of our fallen friends and their relatives and I would also like to apologize to the people whose hopes were not fully realized.  But I do not consider my service to the people to be completed. ”

Аs Defense Minister Davit Tonoyan had formulated and championed a doctrine of “new war, new territories” meaning that Armenia will gain new territories if Azerbaijan resorts to force to solve the problem of Nagorno Karabakh.

EU Calls for Karabakh Status Issue to be Resolved