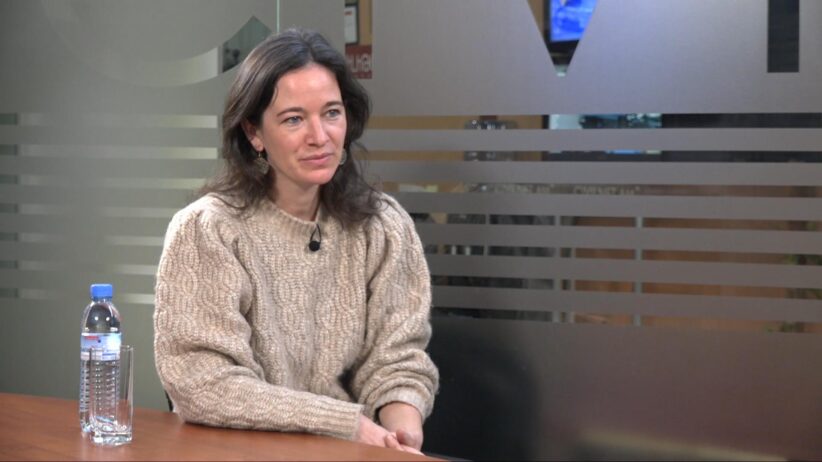 Interview and translation by Ani Paitjan

Your book “Le Sillon” (The Furrow), focuses on the Armenian journalist from Turkey, Hrant Dink. He was assassinated in 2007 by a young Turkish nationalist. You are French, and before your journey to Turkey, you did not know much about the tensions between Armenians and Turks. Why did you decide to write a novel focusing on Hrant Dink?

It happened gradually. I did not go to Turkey with the idea to write a book about Hrant Dink. It happened in the course of several meetings. In particular through the reading of a friend’s book, who is a Turk but she is in exile in France today. Her name is Pinar Selek. She published her book entitled “Because they are Armenians,” in 2015, at that moment I decided to go to Turkey. In her book, she writes about her education as a woman in Turkey and about the way she learnt about Armenians within the context of Turkish history, and how Turkish children are taught their own history in a very biased and misleading manner. They are taught to despise what remains of Armenians in Turkey. And in this book, she writes about Hrant Dink whom she knew when he was still alive. They were friends. And of course, she talks about his murder, the protest that followed and the awareness that rose in Turkish society. They understood that something terrible was re-happening. A kind of latent monster in Turkish society. And maybe, this time, it was necessary to talk about that and prevent this from continuing. It’s this awareness that interested me more than the assassination in itself.

How does Hrant Dink’s case echo in Turkey and in other places fourteen years after his death?

V.M: Time passes by and weakens memories but there are two things. When I discovered this story, I was in Istanbul. I had very few Armenian friends, most were Turks. And I asked questions about Hrant Dink. What does this murder evoke for them? Had they ever heard about it? Do they remember it? And I was surprised and overwhelmed to realize that it was an extremely sore point for people. They all remember where they were the day of the murder, they remember what they felt. Someone told me that that day I felt extremely ashamed to be Turk. He said it was the first time he had that feeling. Most of these people don’t know much about the genocide, but in contrast they realized that this history was continuing. The fact that there was still a 17 year old child from the Black Sea who was able to come to Istanbul to kill such a peaceful person raised awareness about their collective responsibility.

And second, beyond Turkish borders: I live in Marseille where the Armenian community is very important and very active in keeping the memory of the genocide alive. I know there are various events to talk about this topic. I feel that it is not easy to make this story readable in foreign countries. At least in France, where the image of Turkey is very monolithic. During the 2007 European Elections, Turkey was caricatured to disallow it from entering the EU with the argument that Turkey is a muslim country. When we say it is a muslim country, we unfortunately deny the existence of these minorities. We deny the existence of people like Hrant Dink. When we say it’s a muslim country, we forget to say that historically it is not, we almost validate the rhetoric of the Turkish President Erdogan. This is what he wants, that the country becomes fully a muslim country. However, this is not the historical truth. I wanted to highlight the diversity of this country and I think Hrant Dink was doing that magnificently well in his work.

In many ways, democracy in Turkey is at its lowest point. Recently, many Turkish journalists were arrested and sentenced to many years in prison. In your book, you follow the ghost of Hrant Dink, who promised to “transform into heaven the hell where we live.” Is there an exit from this hell for Turkey?

V.M: He had this optimism, a little bit romantic, but I think that’s very moving. The Italian philosopher, Antonio Gramsci, used to say that we need the optimism of will and the pessimism of intelligence. And I think we need both. The situation now is a catastrophe. Will we witness a Turkey that bounces back? I hope so. There are people who are still struggling for this, so we need to support them.  For now, everything is more and more unfree. The murder of Hrant Dink was one of the junctures in modern Turkish history with democratic political suggestions during the elections that followed his case. During the protests of the Gezi Park (A wave of demonstrations and civil unrest in Turkey began on 28 May 2013), Erdogan totally lost contact with the democratic functioning or the potential democratization of the country. Since these protests, we have witnessed only a descent into hell. When I came to Turkey in 2015, I wanted to talk to people who knew Dink, who were in solidarity with him. And actually the massive arrests of activists, journalists, lawyers these past years are the same people whom I met and who were supporting Dink. That’s why we need to support these people, it is the only way to get out of this situation.

In September, Karabakh was attacked by Azerbaijan, a bloody 44 days war followed. Turkey was a strong ally of Azerbaijan. Some experts say it’s rather Turkey’s and Russia’s victory. How do you see the role played by Turkey, a country associated for Armenians with the 1915 Genocide, in this war?

V.M: It seems to me that there is an extremely belligerent and aggressive process in Turkey currently. This is partially due to the internal difficulty that Erdogan is facing. Unfortunately, the beginning of wars are often due to a crisis. There is a catastrophic economic crisis, Erdogan lost the last elections, at least symbolically. He lost the biggest cities of Turkey. He is in a bad state so what does he do? He picks up an internal and external enemy and he tries to create national unity based on that.  These are very well known processes. Why are Armenians the enemy? It is not a coincidence. Since my arrival here, I hear people make the parallel with the genocide, which is completely obvious. It is obvious. We know that the issue of negationism is not only a question of a symbolic recognition or reparation for the victims. The issue of the negationism also concerns the one who denies. The one who denies creates a field to repeat the genocide. That’s why we need to fight against negationism. Not only for the dignity, pride, reparation of the victims, but also because if you deny, you will repeat these acts.

The genocidal mentality is, unfortunately, still present in the country. Inevitably because of the lack of education, of information and also a lack of political will.

V.M: It is an extremely moving experience. This allowed me to come here to Armenia. It is like a transition for the book that continues to live. I tried to give a lot of space to Hrant Dink in this book but it is not only that.  It’s also a novel. It seems to me that the art of novels is also the art of empathy. Even more when the text is written in the  first person. You imagine yourself in the shoes of someone else in the book. From this point of view, it seems very important to me that this book should be read in Armenia and in Turkey. Unfortunately, a translation is not on the agenda. It is very important to try to understand what is happening in the head of the other. My book is written from the point of view of a foreign woman who is trying to understand what is happening in the head of modern Turkish people in the face of this history. I used the term of Agos (the name of Hrant Dink’s newspaper) which means furrow both in ancient Armenian and ancient Turkish, but in French too Le Sillon refers to the lyrics of the national hymn, La Marseillaise, which is a little bit nationalistic and belligerent, so that people hear the diversity of these voices and how it can echo for each of us. So, I hope that the Armenian translation will resonate with  Armenian people. And I hope that it will one day be translated in Turkish because I think it is fundamental for them to hear this voice too.