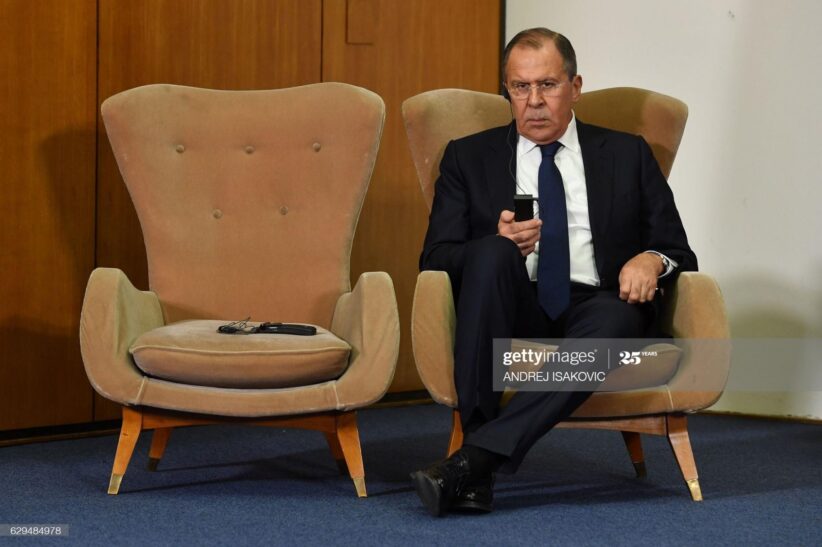 Russian Foreign Minister Sergey Lavrov held his annual press conference to sum up the results of his ministry’s work in 2020. CivilNet picked up the pieces related to the Nagorno-Karabakh issue.

“No one has ever denied the connection between Armenia and Nagorno-Karabakh,” said Lavrov responding to an Azerbaijani journalist’s question about Armenia’s foreign minister’s visit to Karabakh.

In early January, Armenian Foreign Minister Ara Ayvazyan visited Stepanakert. This was his first visit to Karabakh after his appointment on November 18, 2020. “These visits must be stopped. If such provocative steps are taken, we warn that Armenia will regret it even more,” read a statement by Azerbaijani President Ilham Aliyev.

Lavrov said that “In all the agreements, first of all, in the November 9 statement, the parties agreed that there will be a link between Armenia and Nagorno-Karabakh along the Lachin corridor, which will be under the control of Russian peacekeepers.”

“No one has ever denied Armenia’s connection with Nagorno-Karabakh. During the decades of negotiations, the issue of cutting off Armenia and Nagorno-Karabakh from each other was never discussed. And that is why the Lachin Corridor, as a concept, was not rejected by anyone. And this is still the agreement between the parties, in particular, it is subject to the consent of our Azerbaijani neighbors,” he said.

According to Lavrov, there should be a link between the Armenians of Nagorno-Karabakh and the Armenians of Armenia. “I see no reason to prevent contacts at this level. Armenian officials are involved in the process of providing humanitarian assistance to Nagorno-Karabakh, which does not cause any negative reaction in Baku, and it would be strange if it were otherwise. The fact that these Armenian officials make rather politicized statements in Nagorno Karabakh, perhaps, causes tension, and it would be better to avoid it,” he said.

Lavrov said that Russia pays great attention to the contacts between the leaderships of Armenia and Azerbaijan, and the formation of an atmosphere of trust. “That is why now is not the best time to raise the issue of the status of Nagorno-Karabakh as a priority issue. It remains for the future,” Lavrov said.

Lavrov highlighted that the status of Karabakh was consciously not mentioned in the November 9 statement. “This issue is left to the future. This should be dealt, in particular, by the OSCE Minsk Group Co-Chairs. They have now resumed their contacts with all parties. They are preparing to visit the region. The issue of the status of Karabakh will be easier to solve if all the assurances from Yerevan and Baku are made on the ground that the main task is to regulate the daily life of all ethnic and religious communities in Karabakh, and it is necessary to restore their peaceful and good-neighborly coexistence,” he said.

The issue of POWs

The issue of prisoners of war is indeed being discussed, it is part of the November 9 statement on ending the Karabakh war, Russian Foreign Minister Sergei Lavrov said at his annual press conference. He said that this issue was discussed in telephone conversations with Russian President Vladimir Putin and the leaders of Armenia and Azerbaijan, Nikol Pashinyan and Ilham Aliyev, after the signing of the trilateral statement.

He reminded that the issue of exchanging prisoners of war was also discussed during the recent Pashinyan-Putin-Aliyev trilateral meeting in Moscow on January 11.

“At the trilateral meeting held in Moscow on January 11, this issue was discussed for quite a long time. Initially, the following task was set in this issue, that the Armenian and Azerbaijani sides would draw up lists of missing persons whom they want to bring out of captivity. Azerbaijan submitted such a list, the number was insignificant. All of them were returned. After that, the Azerbaijani side did not submit lists of missing persons, prisoners of war or other persons,” Lavrov said, adding that the Armenian side submitted these lists ”not all at once and not in full.”

According to Lavrov, an exchange of POWs during the war has already taken place, which was envisaged by the November 9 joint statement.

“We are already discussing the problem that arose in the Hadrut region in early December, when a large group of Armenian soldiers, which was sent there, was captured. The Azerbaijani side states that these people were sent there after the announcement of the truce, their issue should be considered separately, and not within the framework regulated by the November 9 statement,” he said.

The Russian Foreign Minister noted that this issue is still being raised, and it needs to be resolved, guided by the principle of “everyone in exchange for everyone.” “I spoke with the Armenian foreign minister to be informed about the number of these people. It turned out that their number is more than 62. Now our military is dealing with this issue, cooperating with the military of Armenia and Azerbaijan to clarify the names of the missing persons,” Lavrov said.

We want other international organizations, including UNESCO and the UNHCR, to work there in addition to the ICRC. “Now they are coordinating with Yerevan and Baku on the issue of their assessment missions related to the status of Karabakh,” he said.

The only international organization working in Nagorno Karabakh is the International Committee of the Red Cross.

Lavrov calls the inclusion of Karabakh in Russia “exotic”

Lavrov called the statements about the inclusion of Karabakh in Russia as “exotic”. “No one, including Armenia, has recognized the independence of Karabakh. The thought hasn’t even crossed our minds. We believe that all issues should be resolved by the countries of the region, in this case – Armenia and Azerbaijan. We will contribute to those efforts that will be aimed at strengthening security and peace in the region,” he said.