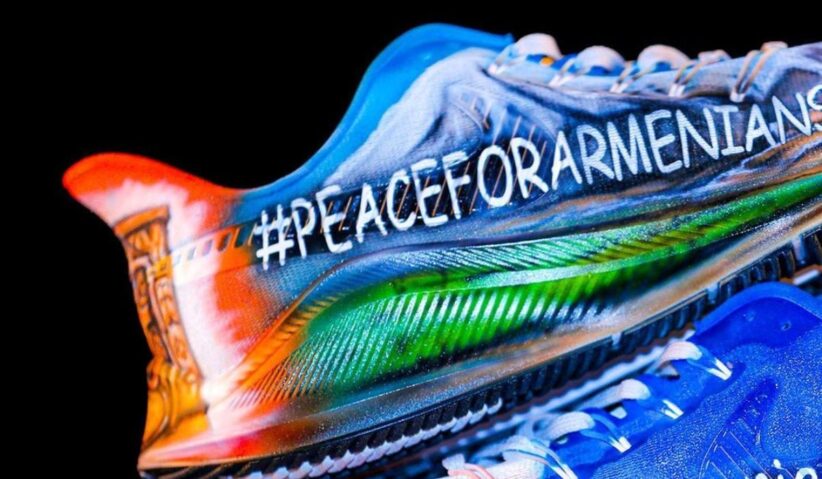 After Sunday’s 45-0 win over the Los Angeles Chargers, the New England Patriots starting quarterback Cam Newton posed with a pair of custom sneakers. The sneakers have a stylized flag of Artsakh on the instep and the hashtag #PeaceforArmenians on the outside. The back of the left shoe appears to be the monastery at Amaras and the back of the right appears to be an Armenian stone-cross (“khachkar”). The sneakers belong to Berj Najarian, the Patriots Director of Football and commonly known as Head Coach Bill Belichick’s “right-hand man”.

I have learned that throughout Armenian history, regardless of any adversity or tragedy, the Armenian people have continued to thrive and persevere,” Belichick said in that video. “I hope and pray for peace, justice, and the safety of the brave soldiers that are fighting for their nation’s recognition and freedom.

In the past, Coach Belichick has been vocal about Armenian issues, likely due to his day to day relationship with Najarian.  Back in 2015, Belichick wore an Armenian flag on his lapel, in remembrance of the 100th anniversary of the Armenian Genocide perpetrated by the Ottoman government when being hosted at the White House by then President Barack Obama.  Belichick wore the pin at the request of Berj Najarian and in fact it was taken off Najarian’s lapel and offered to Belichick on the spot, knowing Belichick would be much more of a focus of the press.  Najarian’s grandfather, Papken Kechichian, was a survivor of the Armenian Genocide.

Belichick has spoken out in this particular area before, in a video for director of football/head coach administration Berj Najarian’s Instagram page.

The link to bid on the custom sneakers:  https://t.co/XCVS7u8i0W