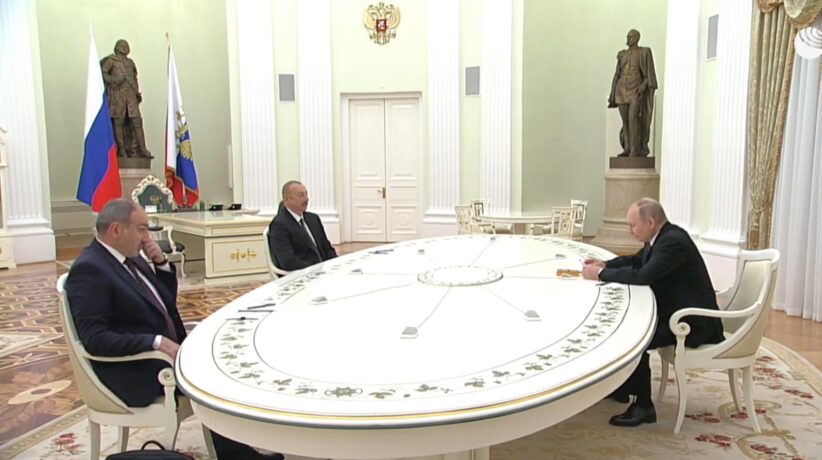 Russia’s President Vladimir Putin says he sees “The necessary prerequisites for a long-term and comprehensive settlement of the long-standing Nagorno Karabakh conflict, on a fair basis and in the interests of both Armenian and Azerbaijani peoples.”

The trilateral talks between the leaders of Russia, Armenia and Azerbaijan were initiated by Russian President Putin and held in the Kremlin on January 11. This was the first encounter of the Armenian and Azerbaijani leaders after the 44-day-war in Nagorno Karabakh, which ended on November 9 with Armenia’s defeat.

Russian “Ria Novosti” press agency reports that Pashinyan and Aliyev entered the meeting hall from different entrances. They did not shake hands, and only greeted each other verbally.

The Russian President thanked the leaders of the two countries for visiting Moscow and said that the agenda includes the implementation of the November 9 trilateral statement signed by the leaders of Azerbaijan, Armenia and Russia. Putin stressed the issues of providing assistance to those affected by military operations, as well as the unblocking and development of trade, economic and transport communications.

He reiterated that the document first of all refers to the complete cessation of hostilities, the sending of Russian peacekeepers to the region and, most importantly, providing the affected civilian population with all possible assistance so that they can return to normal life.

Putin noted that Russia’s actions in Karabakh are in line with the OSCE Minsk Group, which was created following the First Karabakh War with the mission to establish a peaceful lasting solution to the Karabakh conflict. The group is chaired by Russia, the U.S. and France.

“Russia has sought to follow the key groundwork achieved by the OSCE Minsk Group. We continue to regularly coordinate our actions with the Minsk Group Co-chairing partners,” Putin said.

“Today, we can state with satisfaction that the trilateral agreement is being implemented. In our opinion, this creates the necessary prerequisites for a long-term and comprehensive settlement of the long-standing conflict,” he said.

Returning to the upcoming negotiations, Putin said, “I am referring to issues related to the activities of the Russian peacekeeping contingent, the clarification of demarcation lines, the solution of humanitarian problems, and the protection of cultural heritage sites.”

“The task of unblocking economic, trade and transportation communications in the region and opening borders deserves special attention. A special trilateral working group chaired by the Deputy Prime Ministers of Russia, Azerbaijan and Armenia is expected to work on these issues,” he said.

Per the November 9 trilateral statement, Russian peacekeepers have been deployed to Karabakh to monitor compliance with the ceasefire and ensure the safety of the Armenian population in the region.

Aliyev Refuses to Hand Over Dozens of Armenian Prisoners