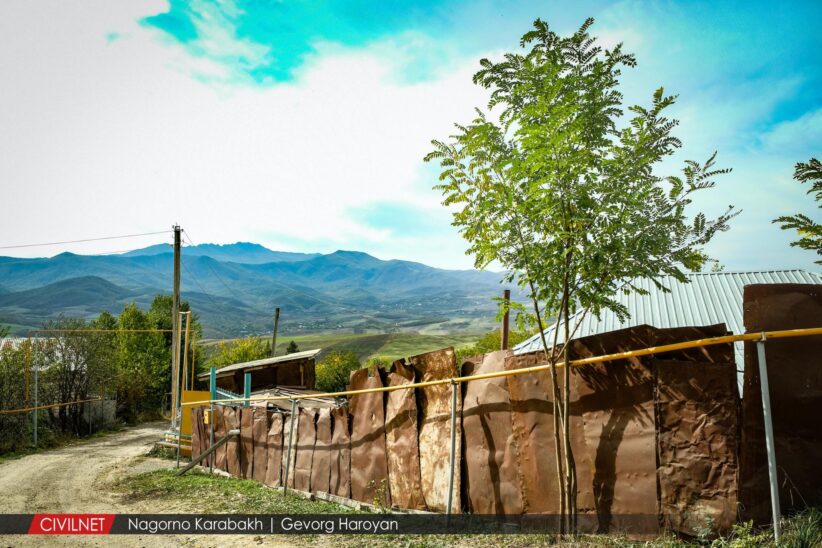 For 26-year-old Arpine Harutyunyan the start of the war was not as earthshaking as the end of it.

On that terrifying morning of September 27 Arpine was awakened – like most Artsakh (Karabakh) residents – by the sound of explosions. At her family’s home in the village of Kolkhozashen about 18 miles from Martuni, she gathered with her mother, sister and two brothers and sought shelter.

Within 48 hours, she was a refugee, living at a hotel in Goris. Her brothers were on the frontline. For six weeks she languished and anguished, mostly at the Mirhav boutique hotel which Trip Advisor says is the best place to stay in Southern Armenia. Not for Arpine who was born in 1994, the year the first Karabakh war ended.

Then in the early morning hours of the 45th day of the war, it was suddenly and shockingly over. “I was heartbroken. I knew I could not go home.”

On October 28, the 32nd day of the fighting, she told a visiting journalist she couldn’t wait for the war to be over so she could go home.

The day we met, she was sitting alone at a wooden table in a pleasant garden, a pomegranate the lone food on her plate, a Lenovo ThinkPad on her lap. She didn’t look like a war refugee, rather a young woman on a weekend getaway.

She talks of her life, a life born weeks after the magnificent victory in 1994, a war she would learn that nearly killed her father.

“My mother was pregnant with me when my father was seriously injured in May 1994, but he struggled and miraculously survived.  I was born after the victory in September 1994 and lived for 26 years in unrecognized Artsakh, but with the psychology of a winner.”

That “psychology of a winner” was embellished knowing the great Monte Melkonian fought heroically near her village.

“I would not be wrong to say that every conscious Artsakh citizen knows about Monte. To me, Monte is a patriot, a man who knows how to love and dedicate himself completely.”

The so-called “4-Day War” of 2016 brought fear briefly, but that winner’s psychology prevailed, and by 2017 Arpine was working as a statistician at the Caroline Cox Rehabilitation Center in Stepanakert. The next year, Instigate Mobile, a Yerevan-based software engineering company, announced it was offering programming courses. This was Arpine’s field of expertise and soon she was working for them. She still does.

Then, on the morning of November 10 the war was over. Just like that. Over.

She was in bed at the Mirhav Hotel when she woke up.

“Usually, I don’t get up in the middle of the night, but today I had a strange feeling,” she said. “I woke up at 1:00 AM and opened Facebook for some news. First, I saw Nikol Pashinyan’s post regarding my homeland. I can’t explain what I felt that moment. I didn’t want to believe it. I was trembling all over my body. I thought about my brothers who are on the frontline in Artsakh. I thought about my village Kolkhozashen where my father is buried.”

Hours later she heard about her brothers, Mihran, 24, and Tigran, 19. They were both alive. The surrender agreement gave to the Azerbaijanis the areas they had taken control of. Arpine’s village had not been “taken”, but much of the area around it was under the enemy’s control.

“Yes, it’s good to stop fighting. It can save my brothers’ and other people’s lives. But nobody has the right to give Artsakh to the enemy. It is an insult to our living soldiers and our fallen soldiers. I can only say that they died for the sake of the homeland and now we are alive and homeless.”

Four days after the Russian brokered ceasefire, she’s still at the Mirhav and reflects on the war and what she calls “one signature”.

“I want to be honest. From the first day of the war, I realized that it was serious, that victory would be a miracle. But I did not expect such a result. I did not expect that we would lose Artsakh with one signature and the rest would hang in the air.

“My village is still ours. I want to thank God. There were 250 residents. At the moment, the women have left with their children, but all the men are still in the village and they will stay there, including many of my relatives, but I personally cannot do that now. I want to repeat that I have lived in unrecognized Artsakh for 26 years, but I will never live in a defeated Artsakh.”

Arpine Harutyunyan takes back her use of the word “defeated”.

“Or rather not defeated Artsakh, but betrayed. Monte’s mission was not continued, and the Armenians closed the last page of history for this land with their own hands.”